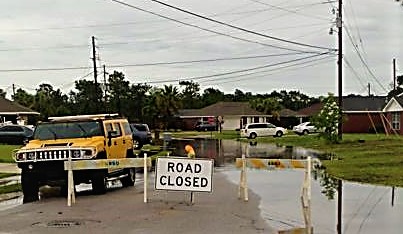 Navarre residents’ number one priority is infrastructure, according to a survey conducted by Preserve Navarre, a nonprofit organization aiming to get an incorporate vote on the November 22 ballot.

Wes Siler, who is leading a new effort to make Navarre a municipality, says a city government would more effectively address important area issues which Santa Rosa County so far has failed to do.

“The need has been particularly and painfully evident in the past few weeks with enormous flooding issues across our community,” said Siler.

Siler said the group’s survey, which has received responses from more than 3,000 Navarre residents, indicated residents do not want changes to fire control, alterations to law enforcement or reshaping of their lives. “They want an investment of a reasonable amount of funds into infrastructure to do what the county won’t: invest in Navarre.”

Preserve Navarre is currently working on a feasibility study and charter to fulfill additional requirements mandated by Florida’s State Constitution.

Siler will also make a presentation during this week’s Santa Rosa County Board of County Commission work session, which will take place at 8:30 a.m., Thursday, Sept. 23 at the County Administrative Complex, located at 6495 Caroline Street in Milton.

Questions regarding Preserve Navarre may be directed to Siler at 850-803-6424 or PreserveNavarre@gmail.com.