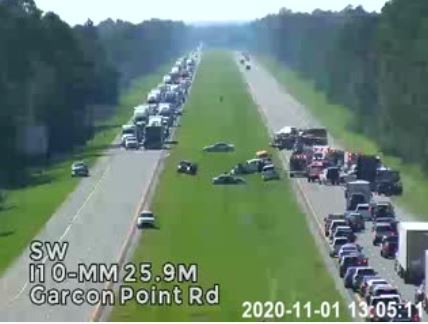 The Florida Highway Patrol reports that a 12-year-old girl from Destin was killed today in a crash on Interstate 10 in Milton.

Per FHP, the sedan attempted to merge into the left lane, and struck the right side of the pickup truck.

The sedan came to rest within the center median, facing north. The driver had minor injuries and a 21-year-old passenger reportedly had no injuries.

The pickup truck overturned coming to final rest within the center grass median, facing north. One of the occupants of the pickup truck, a 12-year-old girl from Destin, was pronounced deceased on scene. The 26-year-old male driver had serious injuries, and a 37-year-old female passenger was listed with critical injuries. Additionally, an 8-year-old male had serious injuries, and a 12-year-old female had minor injuries.

The westbound lanes of the Interstate were blocked for some time following the accident due to the investigation, which FHP says is on-going.