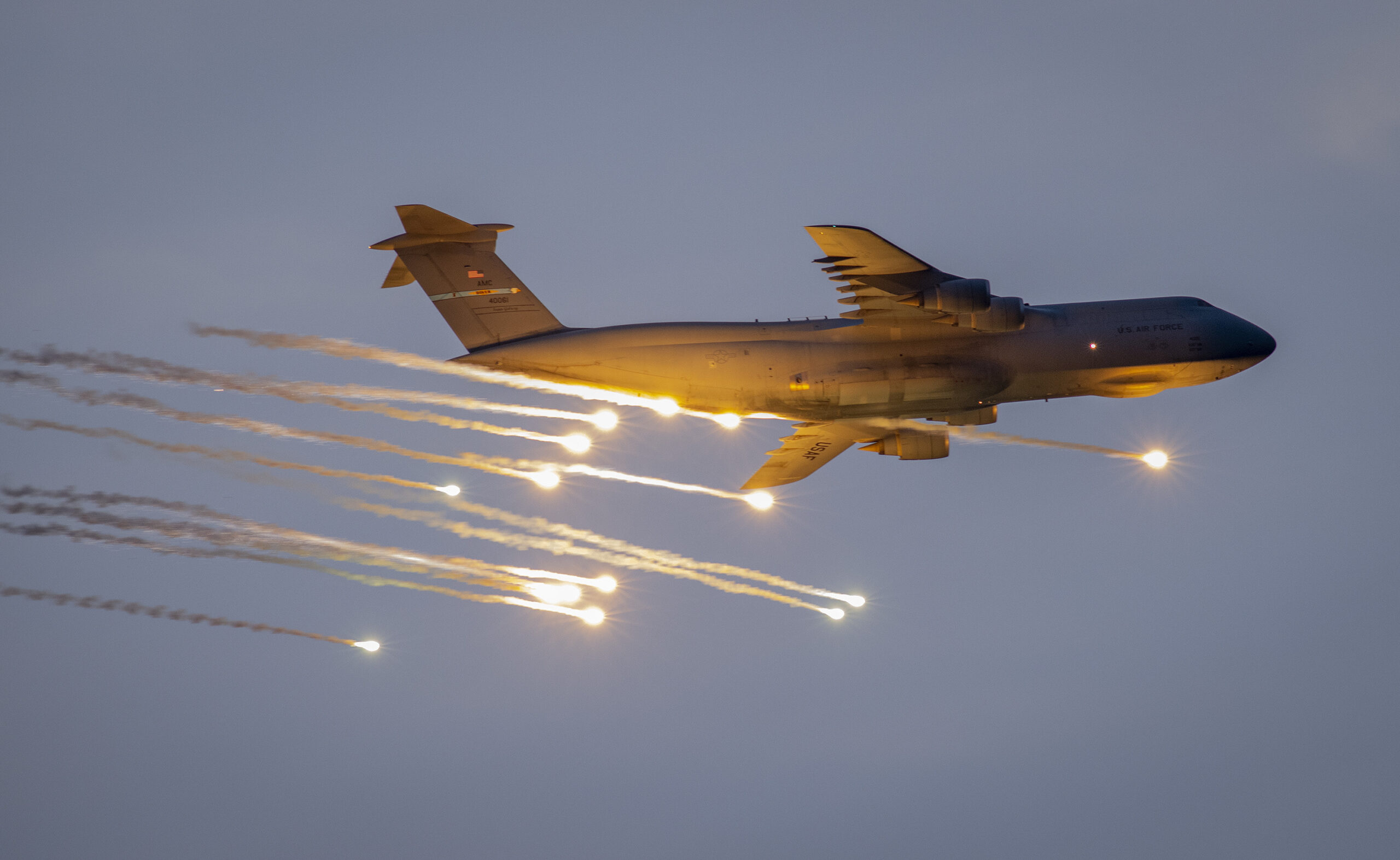 A 436th Airlift Wing C-5M Super Galaxy releases flares during a test May 12 at Eglin Air Force Base, Fla. The Dover Air Force Base aircraft and aircrew released the flares as part of a two-week defensive countermeasures test program with the 46th Test Squadron. (U.S. Air Force photo/Samuel King Jr.)

The 436th Airlift Wing’s 247-foot long, 65-foot tall giant and aircrew from Dover AFB, Delaware, visited here for defensive countermeasures testing.  Each night, the aircraft flew into an area of the range and released more than 15 flares.  This process was repeated several times from different range entry points and angles throughout the night.

The goal of Air Mobility Command Test and Evaluation Squadron’s testing was to increase aircraft and crew combat survivability by evaluating and fielding improved defensive systems capabilities.  Eglin was the prime site for this testing due to its one-stop shopping location for this test type according to Jim Bonn, AMCTES test director.

“AMC brings aircraft and crew and everything else is ready for us,” he said.

For the 9th Airlift Squadron’s operational aircrew, the chance to participate in countermeasures testing and to release flares going 300 knots at 1,500 feet was a unique opportunity not to be missed.

“There are rare situations when the aircraft does pop flares,” said Capt. Bryan Chanson, 9th AS pilot.  “The crew is usually focused primarily on flying out or away from the potential threat and hoping flares do their intended jobs.  The testing allowed us to gain the situational awareness to concentrate on flare dispense in a safe environment.”

The 46th Test Squadron was responsible for the Eglin-based test planning, resource coordination and execution for the entirety of the Super Galaxy’s test. Flare testing requires support from many Eglin units and external organizations.

“Countermeasure testing like this is a Team Eglin event,” said Capt. Daniel Clarke, 46th TS Defensive Systems Flight commander. “Our test engineers work hand in hand with the 96th Range Group to ensure resources are ready to test and collect data and the 96th Maintenance Group ensures every flare tested is loaded on to each aircraft.”

AMCTES test directors will provide AMC headquarters with a detailed analysis of results once they complete their assessment of the data gained from the Eglin testing.