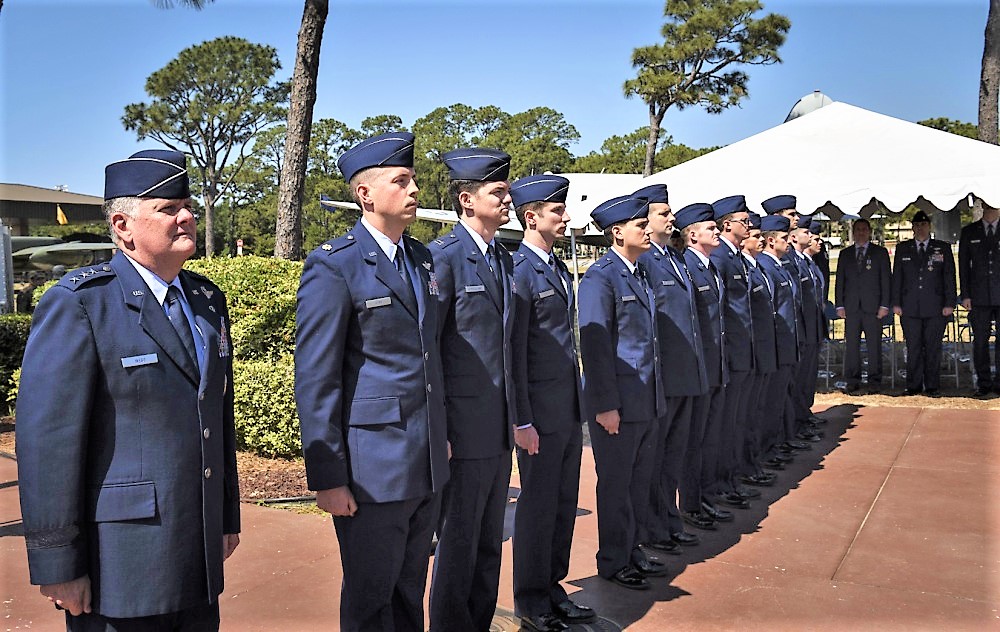 There were 808 lives that hung in the balance as terrorists launched coordinated attacks against friendly forces.

Joint special operations teams were exposed and under duress as AC-130U Spooky Gunship crews circled above, pushing the limits of gun barrels to the melting point and providing precision airstrike capabilities to the troops below.

Lt. Gen. Brad Webb, commander of Air Force Special Operations Command, awarded 24 Airmen the prestigious accolades during a ceremony, here, May 11. Three Airmen were unable to be in attendance.

“All of the DFCs presented today were earned in the dangerous skies of Afghanistan,” said Webb. “Although dates and objectives differ, the general mission remained the same … defend Americans and their partner forces, and decimate the enemy.”

The DFC is awarded to any officer or enlisted person of the U.S. Armed Forces who have distinguished themselves in actual combat in support of operations by heroism or extraordinary achievement while participating in an aerial flight.

On July 25, 2016, the first aircrew awarded provided over watch for 114 American and Afghan Special Operations Forces during a high-risk, daylight, armed assault in Nangahar Province, Afghanistan. As the friendly forces pushed deeper into a valley, more than 50 insurgents executed a complex ambush utilizing higher terrain and buildings to effectively surround the friendly forces with multiple fortified positions and strongpoints.

The crew precisely employed danger-close 105mm howitzer rounds within 120 meters of friendly forces while continuously working through gun malfunctions. When the gunship crew ran low on fuel, they coordinated the launch of another available gunship to provide backfill, but upon arrival, enemy forces began a new wave of firing. Both gunships established a formation and immediately began engaging with four guns simultaneously.

Low on fuel and ammunition, the crew coordinated for the launch of the other available gunship to provide backfill, to allow them to refuel and rearm. As the third gunship arrived, the enemy began a new wave of firing on friendly forces. The AC-130s quickly established a gunship formation and immediately began engaging with four guns simultaneously, providing lethal effects on the insurgents. In total, the crew flew 12.3 hours in support of ground forces which led to zero friendly fatalities, 31 enemy killed in action and 28 structures destroyed.

“These are exactly the kinds of missions where Air Commandos thrive,” said Webb. “No matter the challenge, the difficulty or the personal hardship endured, Spooky finds a way.”

On March 29, 2017, the second aircrew awarded was providing close air support for 35 American and Afghan Special Operations Forces during a high-risk daylight armed reconnaissance mission in Kot Valley, near Nangahar Province, Afghanistan. Overwhelming hostile fire erupted, pinning the ground force inside hostile territory with a heavily armed and concealed force of more than 65 insurgents impeding their path to secure territory.

The gunship crew immediately dropped to a lower altitude to increase weapons accuracy, putting them at risk for effective anti-aircraft artillery and man-portable air defense systems.

Over the next 90 minutes, the aircrew prosecuted 25 fires missions, 21 of those within danger-close range with the closest strike 35 meters away from friendly forces. The crew battled gun malfunctions, low fuel and MANPADS launch indications to enable the friendly force to repel the enemy attack and return to their mission support site without a single casualty.

Upon the gunship’s arrival to the target area, coalition forces were already receiving enemy fire within 100 meters of the friendly position. The crew immediately located and engaged the danger-close threat while simultaneously receiving an engagement clearance from a separate team already suffering casualties. Tactical necessity required the crew to judiciously exceed the cooling requirements for the 40mm and 105mm cannons, providing continuous fire upon the enemy.

Recognizing the aircraft’s dwindling ammunition, the aircraft commander directed command and control to prepare another AC-130 with an increased load of armament and fuel. As soon as the aircrew landed, they swiftly stepped to the other aircraft, spending little time on the ground.

Then, fighting through a cacophony of malfunctions with the weapons systems and communication shortfalls due to electromagnetic interference, they continued to engage the enemy while friendly forces remained pinned down.

“These are the stories of legend and lore told around the squadron,” said Webb. “The men and women of this command live our ethos everyday … There is a way, we find it.

On May 24, 2017, the fourth aircrew awarded was providing close air support for 378 American and Afghan Special Operations Forces during a high-risk daylight armed reconnaissance mission in Nangahar Province, Afghanistan.

While inbound, the crew was informed the friendly ground force was taking effective enemy fire and was able to put rounds on enemy forces within seconds of verifying friendly positions – eliminating the threat.

The crew battled smoke and fumes from a malfunctioning generator, electrical issues and major gun malfunctions to keep the ground force safe.

“I like to think the sounds of Spooky are a beautiful symphony of destruction,” added Webb. “To our aircrews being honored today … on target and fire for effect!”