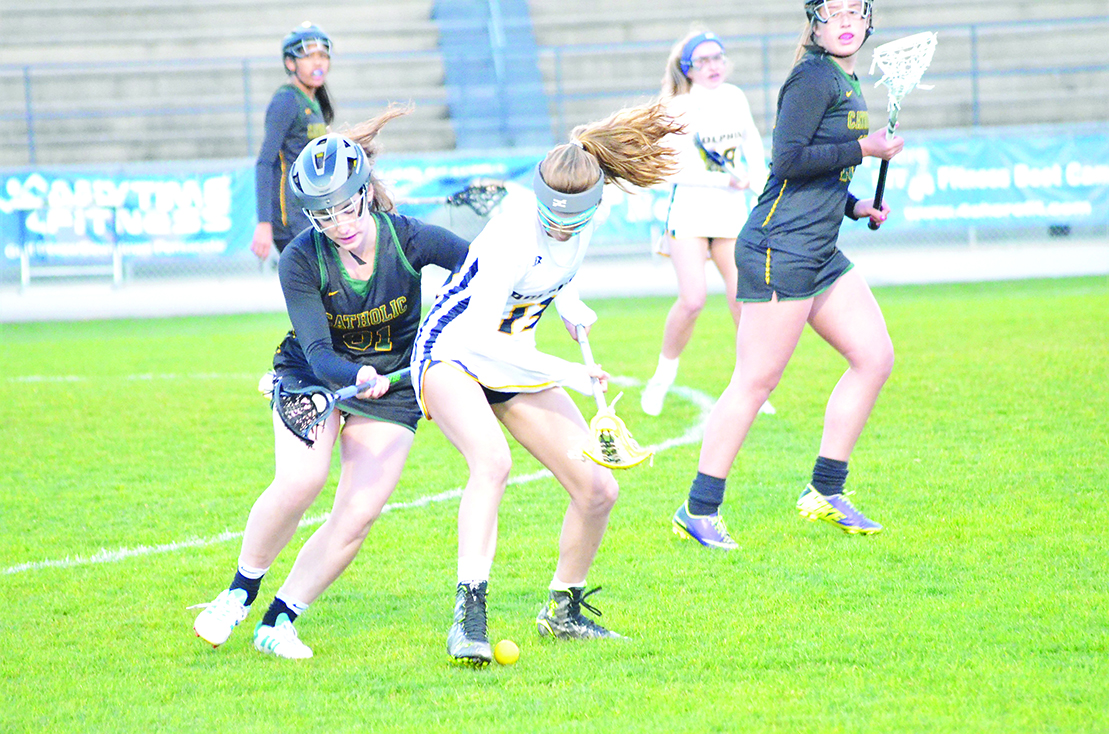 Gulf Breeze High School celebrated the seniors of its successful lacrosse programs last Wednesday night, seizing victories for both the boys and the girls teams in their Senior Night matches against Pensacola Catholic High School.

The Lady Dolphins made a big splash early on in the match against the Crusaders before substituting a few junior varsity players into the game near the end of the second half, sending the team into the locker room with a 14-point lead.
KateReagan Costello and Avery Currington led the offense on scoring and assists on the night with six goals each, as well as 9 assists for Costello and 4 for Currington. South Santa Rosa News caught up with Costello after the match and asked her how the match prepared them for their upcoming game against Hagerty High School from Oviedo, Fla. — ranked 5th in the state according to Maxpreps.com.
“I mean Catholic is a beginners program so it gave us some time to run some plays, and work on catching and passing — and also to see our strengths and weaknesses,” Costello said. “And I mean playing against Catholic is always pretty cool because it’s a new program and a lot of my friends are on that team — it’s just great to see the game grow more. 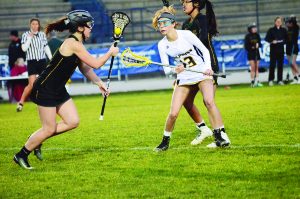 “The first half was a blowout for the Dolphins on both ends of the ball, saving both shots on target from the Crusaders while responding with 14 goals. Another factor in the first half that helped secure victory for the Dolphins was the domination they displayed in recovering the 26 out-of-the 33 loose ground balls.
Catholic started off the second half with a tenacious offense, catching a break two minutes in when Madison Shaw gained possession of a ground ball around 8-yards out from goal and fired a rocket of a shot past Chrissy Gonzales to put the Crusaders on the board 14-1.
After the early flurry of attacks from Catholic, Gulf Breeze was able to stifle their momentum and extend Dolphins lead even further. Sheelan Malone lobbed a pass to Costello inside the crease, who had no angle on a shot and laid the ball off to Clarke Haas — sending it past the Catholic keeper and into the back of the net to bring the score to 15-1.
Caroline Buer was able to pull another goal back for Catholic after taking possession of the ball in her own defensive end and running coast-to-coast, stutter stepping around her last man for a fantastic unassisted goal to make the score 16-2 with 12 minutes left in the match. The shot would be the final punch from the Crusaders, who could not find many opportunities to get past the solid defensive effort put up by the Dolphins.
Despite the many saves from the Catholic goalkeeper, Gulf Breeze simply overwhelmed the Crusader defense with over 40 shots in the match and effectively executed their rehearsed plays to secure their Senior Night victory 22-2.
Boys

The Gulf Breeze High School boys lacrosse team pulled the game out of Pensacola Catholic High School’s reach late in the second half on Wednesday in order to nab a 12-4 win on Senior Night.
The Gulf Breeze defense was the main difference in Wednesday’s Senior Night matchup and kept the Crusaders off the board in the first half with great man-to-man coverage and clean checks — only giving up two fouls in the first 25 minutes of the game.
Although the Dolphins cemented their victory with an 8-goal margin, the lead was not always as great during the match. Catholic came out swinging against Gulf Breeze after the Dolphins came to an early 5-1 lead by halftime.
After seeing the Gulf Breeze seniors walk out during the halftime ceremony, the Crusaders came out to start the second half looking like a different team offensively. The quick passes in front of the goal seemed to finally fall to their targets, which were able to put Cole Foster under pressure with a couple of shots in the first few minutes of the third quarter. 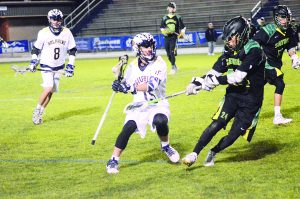 William Butler had one of the best shots of the night for Gulf Breeze up until that point when he jumped to receive a feed pass from the backfield, caught the ball in midair and fired a hard shot towards Foster — all before landing back on the ground. Foster got to that shot to block it, but did not see another that Butler slung past him on his way across the face of the goal at the very end of the first half.
Noah Haas scored a hat-trick during the match, netting his third goal in the second half during Catholic’s attempted come back — bringing an end to their chances of catching Gulf Breeze’s score and putting the Dolphins into a 8-2 lead.
The Crusaders did well to work-in two more goals in the final 5 minutes of the third quarter, but the wave of momentum the Dolphins were riding carried them into the final 12 minutes of play and resulted in another four goals, bringing the final score of the match to 12-4.