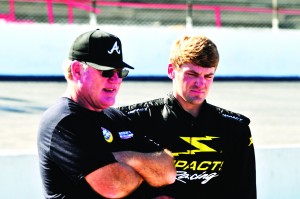 Snowball Derby entrant Kyle Grissom is seen talking to his father Steve, a former 300 lap event winner at Five Flags Speedway and the 1993 Xfinity Series Champion, about the set up of the Super Late Model in advance of this weekend’s Snowball Derby. (Photo by Bill Gamblin | SSRN)

The Snowball Derby is the Super Bowl for short track specialist around the nation as well as some NASCAR drivers who love a fun weekend.
Yet while the prize money may seem good, if you visit victory lane, the intangibles is what some drivers are looking to cash in on.
For some of the drivers who have been fine tuning their Super Late Models and Pro Late Models the intangibles seem quite different.
For drivers like Milton’s Wayne Niedecken Jr., it is not the jump start his career needs, but a quest he has been on as a driver for roughly 40 years.
“I have been trying to win this one all of my life,” said Niedecken, who is the son of Wayne Niedecken. “This would be enormous to me.
“I think this is the only Late Model race I have never won at short tracks around the south.”
While a young driver like Logan Boyette or even a second generation driver like Ross Kenseth or Kyle Grissom a win would have an even bigger impact on a career they are trying to get started.
“A win like this would be huge for my career as a driver,” said Grissom who was in town this past Saturday to shake down his new car. “To win a derby would make your short track career.
“My dad (Steve Grissom) won a 300 lap race here back in the 1980’s and I would love to accomplish the same thing that he did in his career.”
But for both drivers, the key to this weekend is being around at the end and having a chance to be competitive and try to win the elusive Tom Dawson Trophy.
Some drivers will have an easy route by being one of the top 30 fastest drivers in qualifying, while some will have to go through the last chance qualifier or hooligan race.
“We are bringing a new car for both the Snowball and Snowflake races,” said Niedecken. “We have taken the last couple of years off from the derby as we were down on equipment and didn’t have the knowledge we needed on the current setups.”

This year all of that has changed for Niedecken as his focus will be on driving his 99 machine with sponsorship from the Studer Group and the Pensacola Blue Wahoos.
“The past few years have been a struggle, but we have upgraded our cars and when it comes to the pro program we have turned it around a complete 180 degrees,” said Niedecken.
“We won the season championship at Mobile International Speedway in the pro late models and I feel like that speaks volumes to what we have done this season.”
Niedecken will also only have to focus on his driving duties as he has enlisted the help of Gene and Alex Roberts as far as calling the shots regarding his race cars this weekend.
In the past the pressure has been all on Niedecken.
When it comes to a driver like Kyle Grissom, he is not only counting on his experience, but the experience of his father who won the 1993 Xfinity Series Title.
The elder Grissom is definitely use to calling the shots under pressure. While playing football and basketball in his hometown of Gadsden, Ala., he turned down a scholarship offer to play quarterback at the University of Alabama to pursue his racing career.
“I feel a lot a pressure as a driver, but I can say that I get none of that from my dad,” said Kyle Grissom. “By him being a driver it is a lot easier to talk to him and he understands better what I am saying because he has been in the driver’s seat as well.”
Niedecken and Grissom show what this races means on both ends of the spectrum, but there are those behind the scenes who understands both sides of the coin as sell.
Five Flags Speedway General Manager Tim Bryant knows what it is like trying to make the field as well as trying to make sure the event goes as smoothly as possible.
“It is a lot more fun as a competitor,” said Bryant, whose family is from Navarre and has a long tradition of racing behind it. “It is a lot more stressful to me as I worry about everyone’s experience from getting all the rigs and haulers inside the pits to the drivers as well as the fans.
“We want them to have a great time; they might not like their result from the weekend as a driver, but we want them all to have a great experience.”
Bryant is the first to realize how much the cars have change from when he was in the driver’s seat to now being a track general manager.
“A lot of things have done a complete 180 degrees since I raced here just 10 or so years ago,” said Bryant. “Shocks are of vital importance as well as downforce, engines, and even the way we use to do tires.”
In the past drivers would prepare their tires for the derby, but now all the tires are impounded and are purchased at the track and used at the track.
“This is one thing that was done to make the competition among the drivers more even,” said Bryant.
Bryant noted there is a lot more attention to the race than when he was chasing the Tom Dawson Trophy.
“There is the tradition of the event when draws several drivers here,” Bryant said. “But if you look at the success the last three, four, or five drivers have had.
“These drivers have gone on to move from the short tracks and find a way into the spotlight nationally”
With 73 drivers currently registered and only 36 cars making the field including provisionals, there will be several drivers loading up Saturday night making the long trip home and thinking about what they could do differently next year.