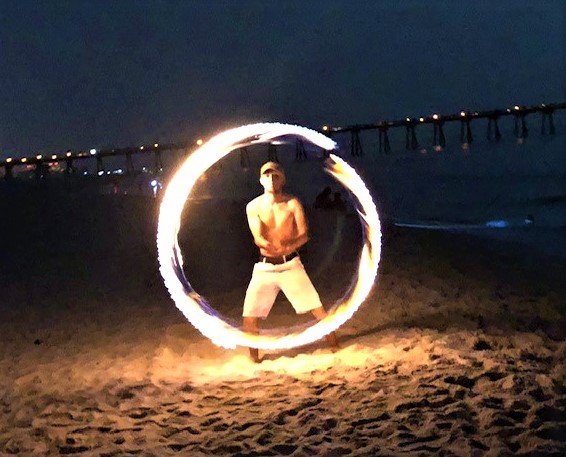 When it comes to charitable fundraisers, the sky is usually the limit as far as types of events. But one being held at Broussards on Navarre Beach will be a first for many as a local man spins fire to raise money for the Wounded Warriors Project.

Shayne Julson explained how he turned “something fun” into a passion and then a business.

“I started fire spinning about five years ago,” Julson said. “The way I began is a little different than most people. When I was younger I did a lot of martial arts training where I learned to use a Bo staff and swords. When I moved to Florida later, I attended a Christmas party with some friends. Someone brought a fire staff. I asked if I could give it a shot and I was hooked. I’ve always been interested in things that got my adrenaline pumping…things that most people would even consider reckless. From the first moment I saw the fire staff I knew it was something I wanted to do. My goal was to create a unique talent that few could replicate.”

Julson says he is mostly self-taught although he has had some instruction from people along the way: the most from local artist, Jenica Huffman.

A year ago Julson got the opportunity to perform along with other big name artists on the largest stage in the world for fire performers at Burning Man. When he stared out into the crowd of 70,000 people it became clear to him that this was his calling.

“I’m now getting the business aspect of it sorted out. My wife and I are starting our own group together known as The FireFlys. We’re making our debut performance today (Fri., Dec. 20) but anticipate many more to come.”

With such a challenging talent it comes as no surprise when people are concerned with his safety.

“People always ask if I have ever been burned,” he stated. “Simply, yeah I have, but never anything serious. Any time fire is involved there is danger, but as long as you respect it and are careful and attentive you usually come out pretty safely.”

Julson adheres to the rules with number one being to always have someone watching your back. As far as the difficulty, he stresses that you have to dedicate a large amount of practice to it.

“I don’t think that you can truly master the art,” Julson said. “You just have to keep at it. And, to those who sees us practicing or performing, we encourage them to watch, but please do not try to do what we do. Safety is the number one priority for us and those in our audience.”

Julson and wife Breana didn’t dream how appealing the fire spinning would be to friends and neighbors in the local community.  After a recent post on the FB site Concerned Citizens of Navarre things just caught on fire.

“We posted to introduce ourselves to our neighbors because we practice in our front yard at night and wanted to let people not to worry about the two crazy people spinning fire around,” Julson joked. “We invited a few people to a small show and things just blew up over night with hundreds of likes and comments. We are so overwhelmed by the community’s support.”

From there the couple wanted to take all that positive energy and give back through the Wounded Warrior Project. Broussard’s Bar and Grill graciously offered their location for a fundraising event.

“I am excited to share this with everyone using three different props at the show,” Julson explained. “I will be using a staff, a sword and a rope dart.”

Donation jars will be in place around the event space and restaurant with a fundraising goal of $1500, however, no minimum is required. Donations can also be made through links on the CCON FB page or by visiting FB pages Shayne Julson/Breana Julson. Tip jars will be in place, as well, to assist in show costs.

“I would like to invite everyone out to enjoy the show and share some good times, and honor the men and women who gave of themselves to ensure our freedom,” Julson said. “Thanks to everyone who’s supporting us in this endeavor.”

WHAT: The Fireflys for Freedom!

WHERE: Broussard’s of Navarre Beach