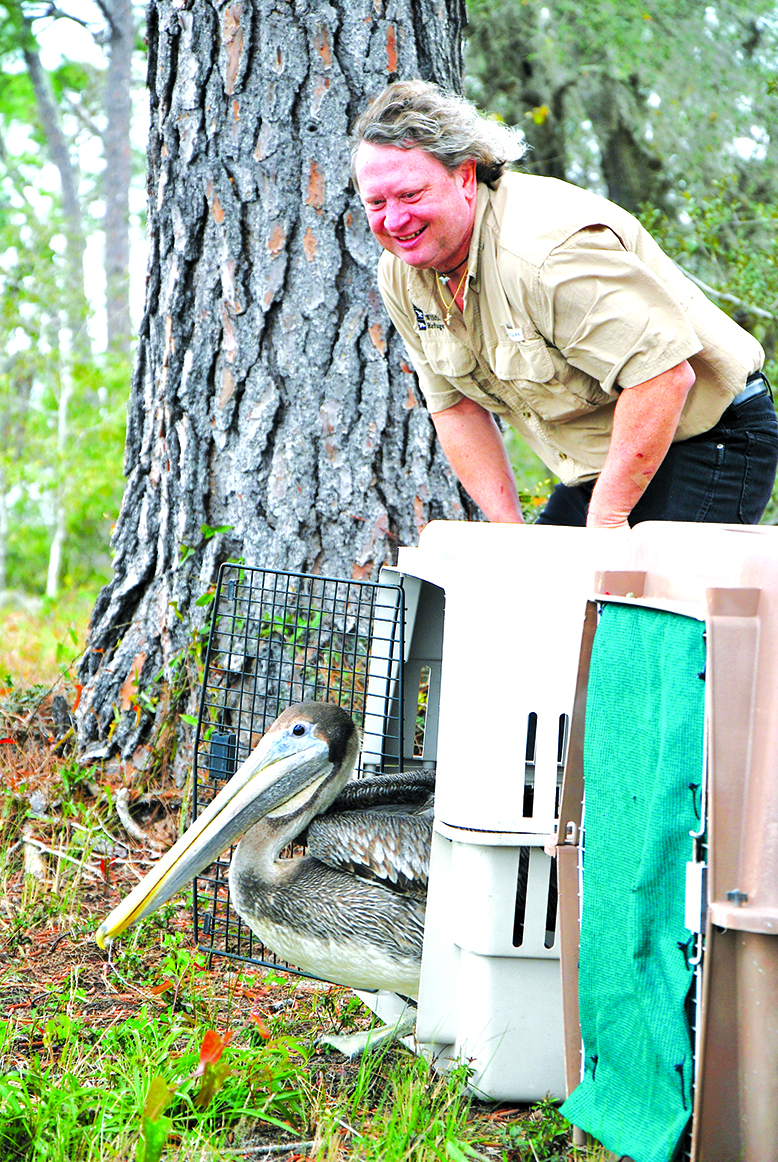 The Emerald Coast Wildlife Refuge is hoping a vote from the county will help them secure a permanent home in Holley to utilize as a rehabilitation facility/educational center for the animals they rescue on a weekly basis.
On Tuesday, members of the non-profit met up on a 5-acre parcel of property in Holley, 2.28 acres of which is being donated to ECWR from a couple who share a passion for helping animals. Bill and Carol Andersen own the 5-acre lot, which sits on East Bay, and plan to donate over 2 acres of that lot to ECWR in  order for them to have a more permanent home. For the last several years, the non-profit has been leasing out the old Okaloosa Fire Station on Okaloosa Island. But land donor and ECWR President Bill Andersen said the walls in the facility are crumbling around them, and it’s time to find new digs.
The organization also runs the Emerald Coast Wildlife Refuge Zoological Park in Crestview, which they took over years ago, but there plan is to sell the refuge and consolidate the non-profit to the Holley location.
But hopes of relocating hung in the balance (until Thursday) as county zoning board members had to pull the trigger on whether to re-zone the property from R-1 (Residential) to P-2 (Active Park or Recreation site). The board ultimately voted 5-4 to approve the zoning change.
Despite the OK, the overall process of rezoning the land has come with a few hiccups according to Bill and ECWR Director Susan Leveille.
“This is a bit controversial in that a couple of the neighbors have gotten an attorney and are objecting to the rezoning. We met with all of them last Wednesday and the neighbors were like ‘Nope, we don’t want school kids coming out here,’” Levielle said, noting that the rehab facility on Okaloosa Island encourages schools and children to visit the site and to learn about what ECWR does. “The neighbors have said, ‘We like you, but we don’t want this.’ We feel very positively (that rezoning) will be approved. I think the zoning meeting will be pretty pretentious.”
Now that the zoning has been OK’d, ECWR has to meet in front of Santa Rosa County commissioners on March 30 to get the OK for the organization’s site plans for the Holley property.
“The neighbors on each side of us don’t want us to put this refuge here, so it’s more of a personal issue for them,” Bill said, pointing out that both neighbors on each side of the property, located on Cloptons Circle, don’t want the ECWR to relocate to Holley. “They’ve lived here so long, they’re used to how it was.” 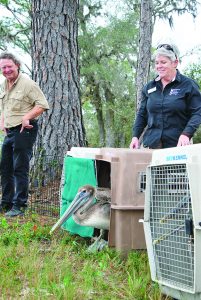 Leveille said that there are plans to construct three 40 x 50 metal buildings on the 2.28-acre parcel, which will house an education center, a medical/rehab center and a marine mammal center.
Despite the worry from surrounding neighbors, Leveille said the facility would not disrupt any of the neighbors and would serve as a proper area for the rehab center considering the remainder of the property is owned by the Andersens and the couple has no problem letting the non-profit utilize the portion of the 5-acre lot that sits on East Bay to release some of the rehab center successes. And that’s exactly what ECWR did on Tuesday. Organization members met up on Cloptons Circle along East Bay and released 7 pelicans, all of which had been rescued from areas in the Florida Panhandle and rehabilitated by ECWR.
“Most of these pelicans were entangled in fishing line and we saved them,” Leveille said.
According to ECWR Vice President Mitch Robbins, if the county OK’s the non-profit’s site plans on March 30, ECWR will start construction on the rehab/medical facility first and then move forward with two other phases of the site once funds become available.
“It costs us $1,500 a day just to stay operational,” Bill said pointing out that ECWR has some paid staff members on hand such as a veterinarian, but they are paid through grants the non-profit acquires year in and year out. “How much we can do here will really be based on how many donations we get and money we can acquire to make it happen.”
According to Robins, ECWR has proposed building the 2,000 sq. ft. rehab/medical facility on the land as part of Phase 1.
“In Phase 2 we want to build an education center where people can come and learn about what we do,” Robbins said.
In Phase 3, the organization has plans to build rehabilitation pools for sea turtles and dolphins.
“We have a lot of people who are behind us now and have donations in hand. But it’s up to the county whether we get those donations or not,” Robbins said, noting the donors will only dish over the money if the county  OK’s the organization’s site plans for the 2.28 acres.