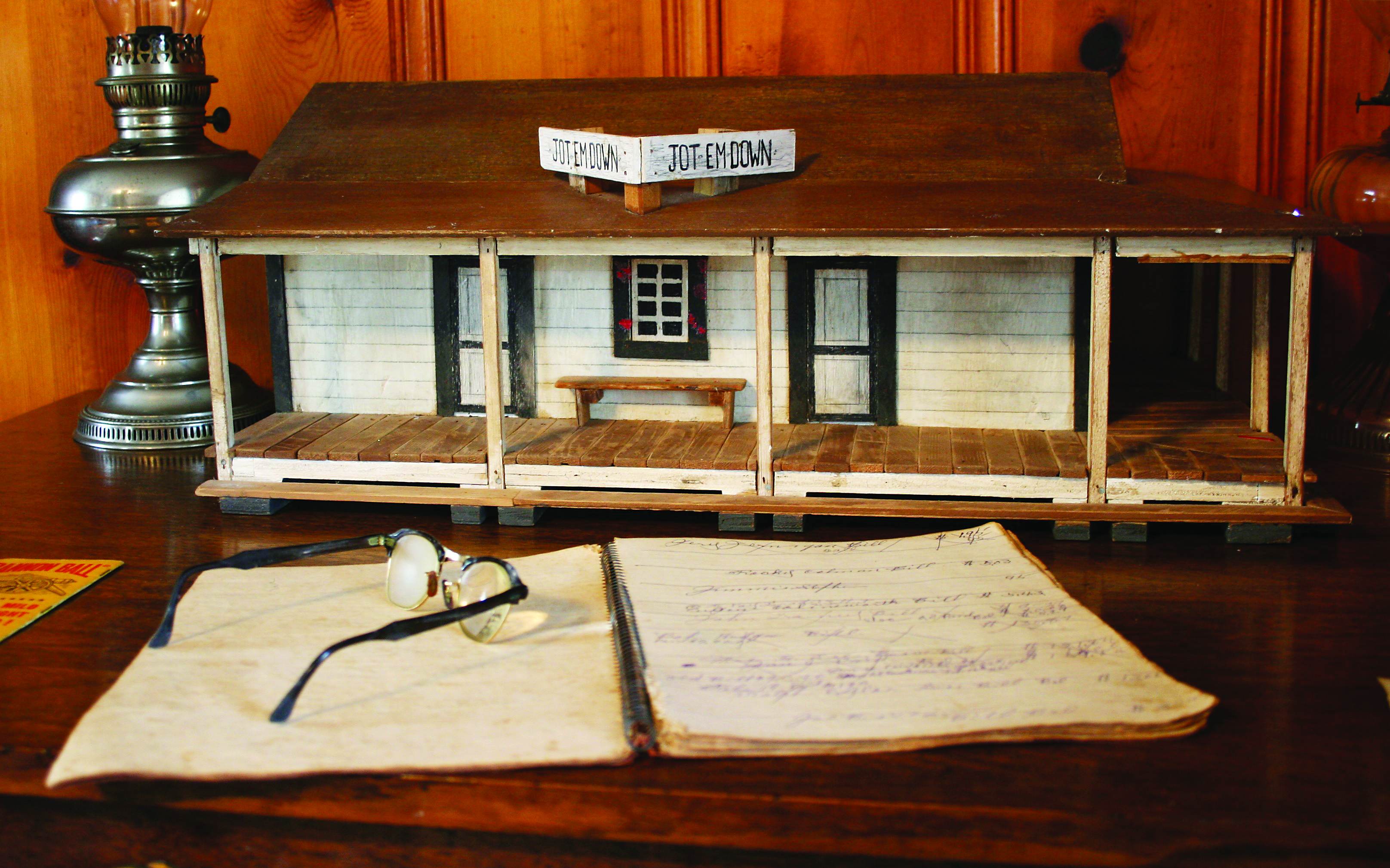 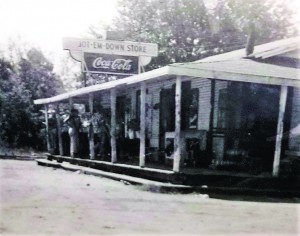 This historical photo of the Jot ‘em Down store is hung up inside Navarre Lumber located on Highway 87S in Navarre. (Photo by Romi White | South Santa Rosa News)

Inside Navarre Lumber hangs an old black and white photo of the Jot ‘em Down store, which no longer stands but once served as the hub of the Holley community in the mid-20th century.
Owned by the late Chanley and Mattie Williams Tolbert, locals would gather at the store to catch up on local happenings and keep groceries supplied between weekend trips into town.
The Tolbert’s had nine children, and their sons helped farm, cut firewood, make cane syrup, deliver ice and tend to livestock while their daughters, particularly Lillie Mae and Doodie, worked at the store, which was located just south of Food Mart on Hwy. 87 South at Nelson Street.
Chanley and Mattie’s great-granddaughter, Connie Clark, now runs the new store, which an area businessman has leased to buy from Vonnie Tolbert, who is also a grandchild of the Tolberts.
The store got its name from a receipt book Chanley kept in which he’d allow folks to charge items, which were sometimes paid for in trade. His granddaughter Betty Hawkins still has that book which offers a glimpse back to simpler times.
Before gopher tortoises became endangered, they were a popular trade item, along with used brass artillery shells from nearby Eglin Air Force Base, which Chanley would take to Pensacola and sell. Children would also bring in eggs to swap for candy.
Around lunchtime vendors would often gather at the store because Mattie was an excellent cook who would leave food out to share, laying a sheet over the dinner table in their home, which was located behind the store. Visitors would fix themselves a plate and eat on feed sacks in the back of the store.
“Grandma Mattie” is also fondly remembered for her keen sense of humor, and to this day when her descendants say or do something funny, family members say “that’s the Williams coming out in you.”
Mattie loved to entertain people and would make up poems, including this one recalled by her granddaughters Linda Enzor, Billie Dean Wallace, Sylvia Crain and Betty Hawkins:
Down yonder at the Jot ‘em Down store,
Lillie Mae and Doodie, standing in the door,
I thought I seemed to see a racing automobile,
I seen it from the church to Uncle Johnny’s field
Enzor even remembers seeing cars “drag race” on the strip of highway front of the store and said the population was counted by marks on the posts in front of the store and stood at 325 at one point.
And the Tolbert family comprised a big chunk of that population.
William Tolbert, patriarch of the family, had moved to the Florida panhandle from Alabama following the Civil War. He and his wife had five children before his untimely death: Robert “Bob,” Daniel, Jefferson, Mary and Caroline.
His son, Bob, married Maggie Harvell Tolbert, and had five children: William, Jefferson, Hillary, Annie and Chanley, who passed away at nearly 100 years of age in 1982.
Chanley and Mattie’s children included: Margie, Lillie Mae, Doodie, twins Bob and John, Grady, Jesse, and a second set of twins Raymond and Rayford, who didn’t survive long after his birth. 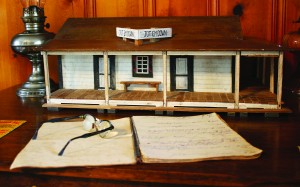 A detailed replica of the Jot ‘em Down store was created by the late Troy Grimes and presented to Betty Hawkins, one of Chanley and Mattie Tolbert’s grandchildren. Hawkins displays the model of the store in her home on top of Chanley’s desk along with the book he used to “jot down” credit and payment. His glasses are pictured on top of the receipt book. (Photo by Romi White | South Santa Rosa News)

Raymond, who is affectionately known as Uncle Pick because he’s always having fun and “picking” on someone, is the last surviving child, although the large Tolbert family continues to grow through the generations.
Today family members enjoy telling stories about how things used to be. One of their favorite characters to talk about is “Aunt Margie.” She was a vivacious woman known for her beauty and sometimes outlandish behavior. Her life’s adventures make for quite a story, but we’ll have to save for another article in this series…
We’ll also be talking to other longtime locals and featuring them in this series of articles kindly sponsored by Navarre Lumber.
Editor’s note: Writer Romi White is a great-grandchild of Chanley and Mattie Tolbert.