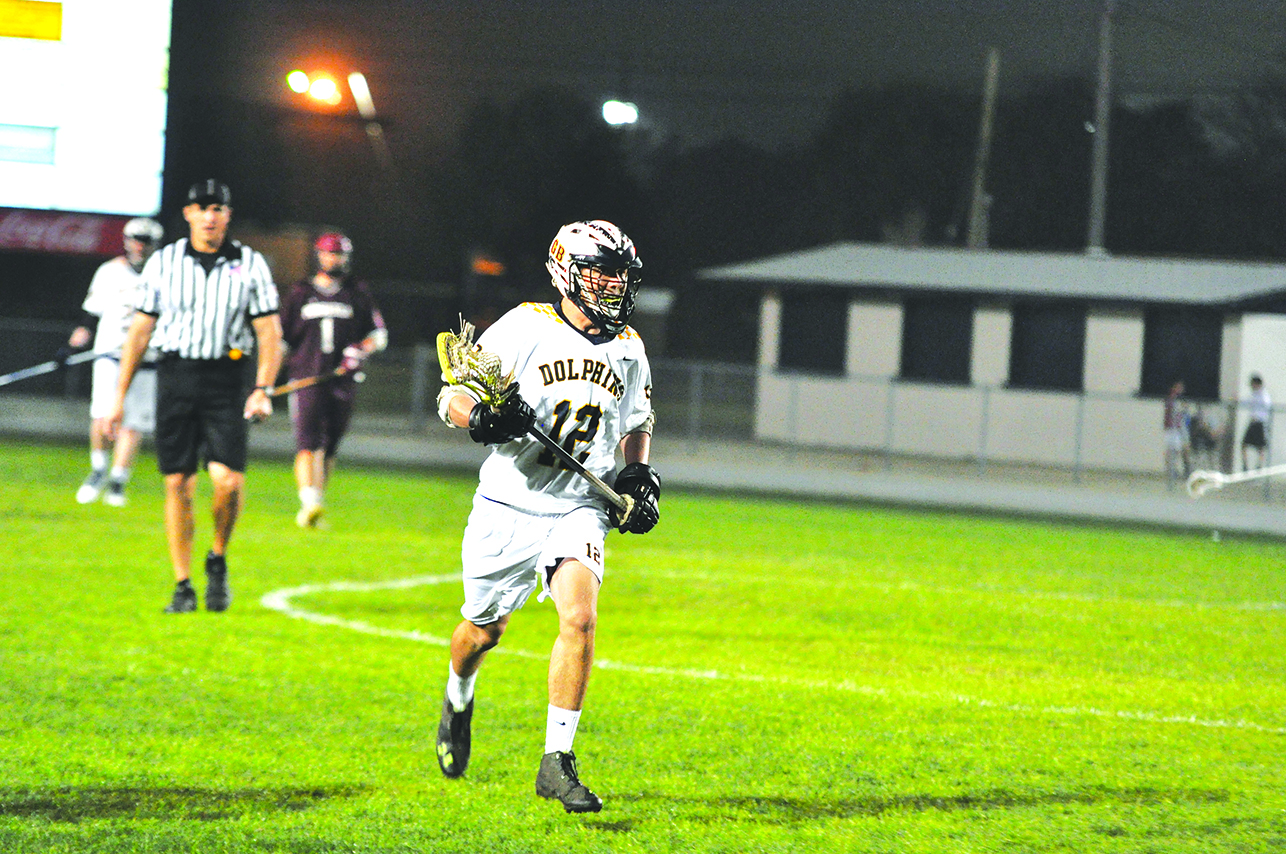 The Gulf Breeze High School boys’ lacrosse team continued on with their record-breaking season last Wednesday taking home a 17-4 victory over the Pensacola High School Tigers.
The Dolphin win put them up 7-0 overall on their regular season.
Dolphin Jake Molina spent no time in the first quarter polishing off the first of many goals for the Dolphins. His first shot into the Tiger goal came just 50 seconds into the first quarter.
Fellow teammate Harold Hill took the opportunity moments later to put a goal on the board for the Dolphins and scored on an empty Tiger net to put the Dolphins up 2-0.
Dolphin Carter Couget put a solid goal on the board for his team 2 minutes into the first quarter thanks to an assist from Molina.
Couget attempted to peg another goal 20 seconds later, but it was wide, and fell into the hands of a Tiger.
But Hill didn’t let the missed goal phase him, scoring through the legs of the Tiger goalie unassisted moments later, putting the Dolphins up 4-0.
A Tiger gained possession of the ball quickly afterwards and threw it at the Dolphin goalie, but it bounced off of goal post with 7:58 left in the first.
Hill powered back down the field and made an attempt at a goal, but it went high. His efforts were followed up by a Tiger goal attempt moments later, but the ball hit the Dolphin goalie, forcing the ball back into the hands of Gulf Breeze.
Gulf Breeze’s Noah Haas saw the time ticking down in the first and wanted to make sure his team had a solid lead going into the second, so he slammed a shot in the Tiger net with 4 minutes left in the quarter to put the Dolphins up 5-0.
Dolphin Charlie Smith gained possession of the ball and made a goal attempt with 3:39 left in the quarter, but it flew too wide to the left, but the Dolphins were still able to keep possession of the ball following the missed shot. And in possession of that ball was Dolphin Tucker Smith who happily followed up the missed goal with a solid shot into the net with 2:17 left in the quarter.
With the clock ticking down past the 1-minute mark, Couget made a last minute shot at the Tiger goal, but it hit the goalie, ending the first quarter with the Dolphins up 6-0.
In the second quarter, the Tiger goalie pushed back against the Dolphin shots, starting with a shot taken by Molina just moments into the second. Seconds later, Haas made a goal attempt, but the ball flew over the Tiger goalies’ head. Then, less than a minute later, Dolphin Patrick Fisher tried his hand at a Dolphin goal, but it was blocked by the Tiger goalie.
But the missed and blocked shots didn’t last long in the second. With 10 minutes left in the quarter, Haas plowed the ball through the Tiger goalies’ legs, putting the Dolphins up 7-0. Fellow teammate Molina followed up the Dolphin goal with one of his own with no assist a minute later.
Tiger senior Nehemiah Jones was able to squeeze in a goal for his team in the second quarter with 3 minutes left in the half, but ultimately, the Dolphins would flush out the half with a 8-1 lead over the opposing team.
The Dolphins were able to rally up 9 more points in the second and gave up 3 against the Tigers to flush out the game with the 13-point lead. 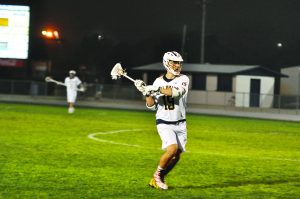 Dolphin Noah Haas looks to score at the start of the second half against the Tigers. (Photo by Mat Pellegrino | South Santa Rosa News)