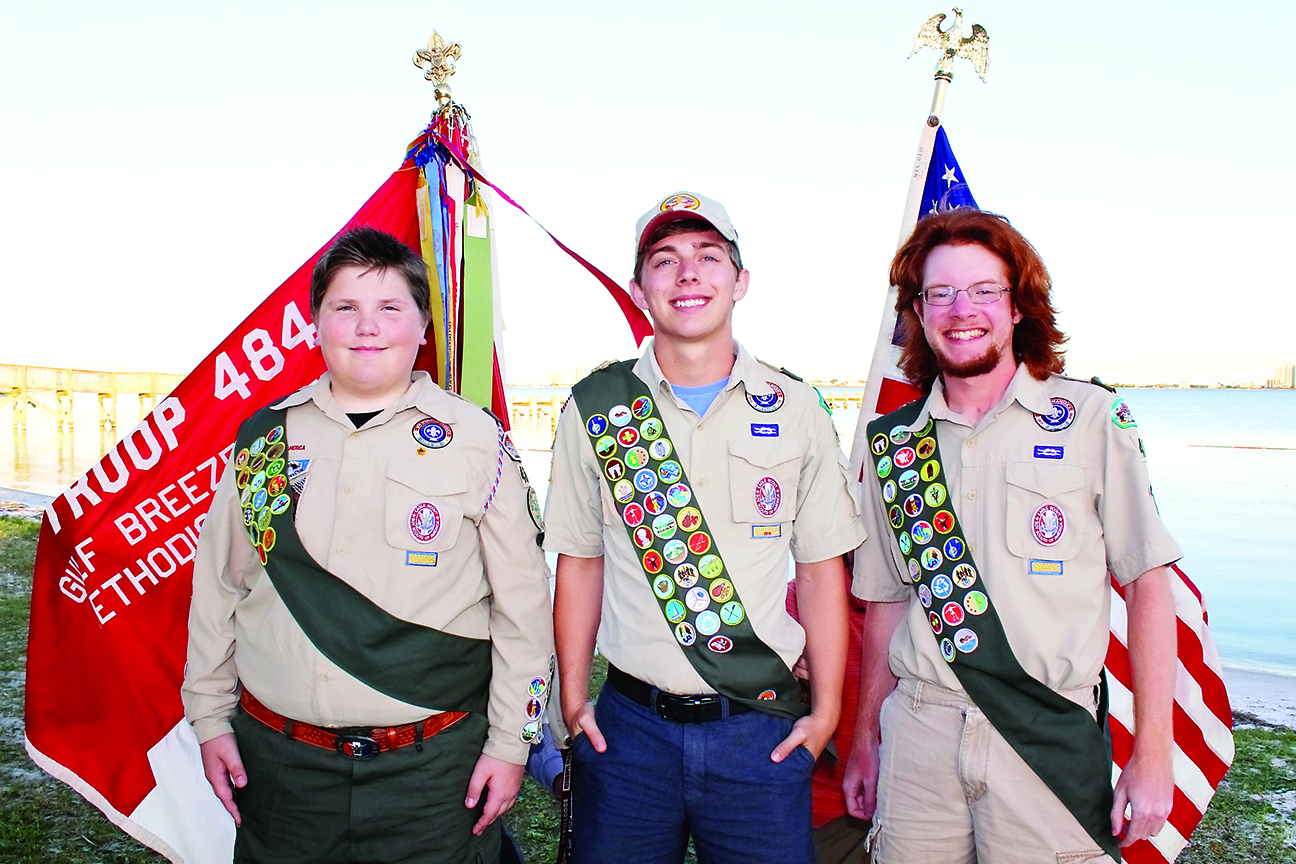 Boy Scout Troop 484 announced last week that three new Eagle Scouts in their troop will be recognized at an Eagle Court of Honor on May 15.
The ceremony will take place at 6:30 p.m. at the Gulf Breeze United Methodist Church Chapel, followed by a reception in the Fellowship Hall. The new Eagle Scouts from Boy Scout Troop 484 are: Sam Motherway, Jack Simone and Tyler Suggs.
Sam Motherway is a senior at Gulf Breeze High School and has been a scout since he was seven years old. His Eagle project was a makeover for the youth food service area for the Gulf Breeze United Methodist Church. The youth pastor wanted to give the youth area a more inviting, coffee shop style for after school study. Sam’s favorite merit badges were Lifesaving, Camping and Wilderness Survival. He will be attending Mississippi State University in the fall. His parents are Dan and Barbara Motherway.
Jack Simone is an honor student at Holley Navarre Middle School. He joined the troop in February
2015 and is a Brotherhood member of the Order of the Arrow. He will be attending the high adventure Philmont Scout Ranch in New Mexico next summer. Jack’s Eagle project was improving and assembling picnic tables for the Gulf Islands National Seashore. His parents are Jon and Michele Simone.
Tyler Suggs is a junior at Gulf Breeze High School. A Florida transplant from Nebraska, he joined Boy Scouts in the 5th grade. He is a Brotherhood member of the Order of the Arrow and a guitar player in his church youth band. His Eagle project was constructing a wolf enrichment platform for the Seacrest Wolf Preserve in Chipley. His parents are Bobby and Susan Suggs.
Eagle Scout is the highest achievement or rank attainable in the Boy Scouts of America (BSA). Only four percent of Boy Scouts are granted this rank after years of meeting the necessary requirements and passing a lengthy review process.