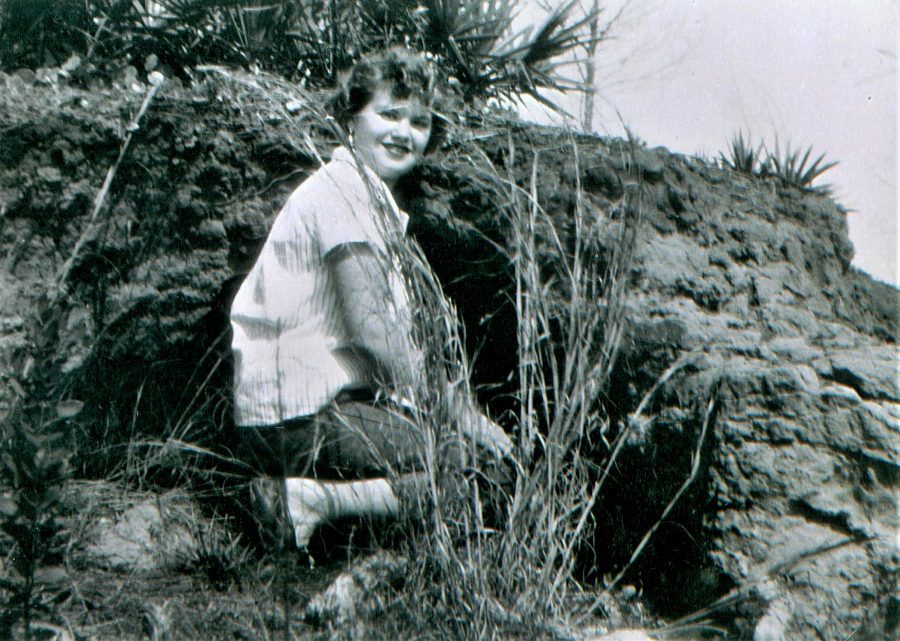 The entrance to one of the “caves” (Photo courtesy Bobbie Broxson)

We live in a place that so many treasures are covered up from time gone by.

As I was having breakfast with my dear friend, Lola Robbins Comans, we were just having a normal conversation about years ago and she asked me if I remembered the caves along the beach up above the water near where the East River Smoke House now stands.  I said no, we only played at the Navarre Park, which used to be called T.C. Hurst Park because she was very famous in our area for being a midwife along with Mrs. Ella Myers.  I can still see and hear those sweet women’s voices in my memories.

Aunt Tece was really my great aunt who we all loved so much and Aunt Ella Myers was my great aunt, too, and went to the same church, Billory Baptist Church, and of course, they stayed real busy around the Holley and Navarre area because most everyone had large families.  There were nine children in our family. I could name many that had 9 to 10 children in their family in this area but I won’t take time out in this story to mention them!

Sometimes I get to chasing rabbits in my stories, so now I will get back to the caves. Lola was surprised that I didn’t play down at the caves.  I told her when I saw the date on the picture that I was only two years old when one of them was taken in 1946 and the other pictures were made in 1953 and 1954.  She said they went in the caves about 3 to 4 feet.  They were afraid it would fall in on them even though it was made from hardpan.  She said it went back a long way.  It was dark but you could still see way back in there. I was amazed that there really were caves along the sides of the beach.  It makes you wonder did anyone ever live in those caves or maybe bears.  May be the reason for so many bears in our area is that they are coming back to claim their ancestors’ territory!  Just kidding!

Back to the caves.  They were destroyed when excavation began.  It was probably used as packing for the beach to make the land hard and add more land to the property. That is what some did to their land.

We mostly played down where the Navarre Park is and we knew it as the T.C. Hurst Park.  Aunt Tece lived behind the TC’S Front Porch.  Isn’t it amazing that it is called TC’S Front Porch with her initials.

When I played at the park with my siblings there was an underground spring that was bubbling up in a thing that looked like a cement tube that was big enough that we as children could lower ourselves in and touch the bottom which was white sand.  It was always flowing because people came with gallon jugs to get water and take it home with them.  It was such good drinking water.  Many times when we went to the park Daddy would take us by boat to the Island, that’s what we always called the Gulf.  He would take us across and let us play on the beach, and I tell you one thing, those sand dunes were so high and wide it was hard to get across them.  We played while Daddy fished in the bay.  We never got over knee deep in the Gulf.  We had always been warned that the Gulf was so dangerous.  I never liked the feel of the sand going out from under my feet.

When Dad had caught enough fish he was ready to go home. He had a gill net that he put in a number 3 wash tub and floated it on a rubber inner tube and walked down the beach until he saw mullet ruffling the water and then he would circle way out from them and trap them in the circle and would get inside the circle and beat around on top of the water to make them hit the net.  Was a sight to see!! We all loaded on the Boat and headed back home.  It was a good day.  No one around and no homes on the island at this time. Progress has changed that but we will forever on this earth have our memories of a vacant island!! Love my memories that God has given to me!!! Thank you, Lord, for memories.