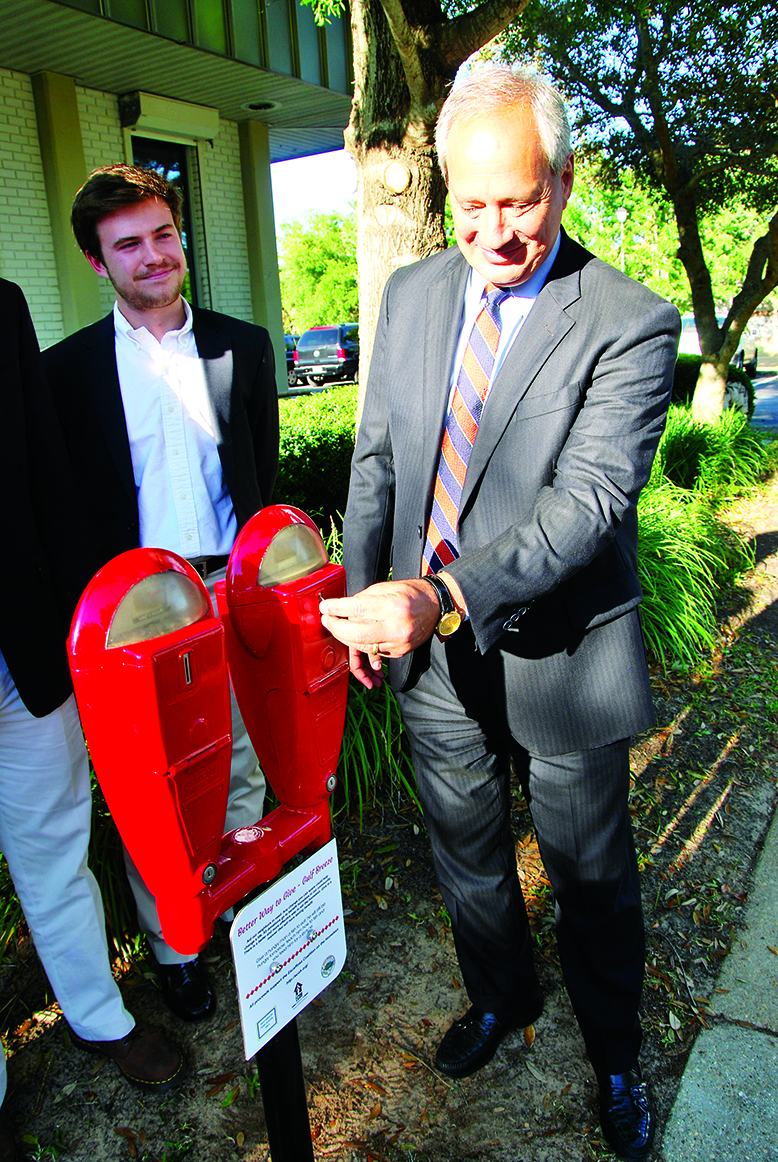 There aren’t many parking meters in Santa Rosa County, so if you see a few popping up in the city limits of Gulf Breeze, don’t be alarmed.
Last year, the City of Gulf Breeze was approached by the 2016 Leadership Pensacola class about an initiative they started to help give back to the area homeless called “Better Way to Give”. The program took old parking meters and turned them into, essentially, piggy banks for the area homeless. The Leadership class asked if the city was interested in running a sister program to help the homeless in bi-county area, and the city graciously accepted their offer.
Leadership Pensacola painted their meters creatively and then placed them in random spots around Pensacola. It’s not mandatory to “pay the parking meter”, but a sign on the meter clearly describes the “Better Way to Give” initiative and encourages anyone to drop coins into the meter. All of the money collected from the parking meters goes directly to the Escarosa Coalition on the Homeless, which utilizes the funds to give back to the area homeless.
Shortly before their Monday City Council meeting, city officials unveiled one of 7 meters they have placed around the city. This one was at Gulf Breeze City Hall. The remainder of the parking meters will be placed at Gulf Breeze High School and the Gulf Breeze Community Center, both in Gulf Breeze Proper.
The city council is urging residents and visitors to be aware that the coin slots are not to pay for parking. Rather they will be used as a method for collecting funds for the homeless. As a matter of fact, many cities throughout the country re-purpose old parking meters to assist in raising funds and awareness for 501c3 groups.
After accepting Leadership Pensacola’s proposal, the city reached out to Gulf Breeze High School’s Future Business Leaders of America. Students in the group were drawn to the project, including member William Welch who had his parents on hand at the unveil.
“Our experience as a family I don’t think is much different that any other people where from the time the kids are little, you’re driving along and you see people on the side of the road and you see the homeless and you hear ‘Daddy, daddy, give those people some money.’ I try to explain to them that this is not helping those folks. Sometimes you’re enabling them to do bad things. And that was the discussion when they were little kids. As they got older, it was a matter of it’s too bad these folks are struggling, I wish I could do something to help,” said Kevin Welch, William’s father. “Then this project came along and it was a way to do something that was practical, it helped the folks that are working so hard to address homelessness in the Santa Rosa and Escambia areas, and it’s sustainable. Folks have seen this work before. To have my kid be a part of it has me pumped up and proud to be a dad, but it makes him proud and I’m hoping that he’ll come back to visit in a year or two or three and I’m hoping he comes back and drives by and sees the meters and says ‘You see those things over there, those are helping the homeless folks around here.’”
The 18-year-old GBHS senior helped pull the cover off of the meter during the unveil to show off one of the many parking meters the group helped refurbish. 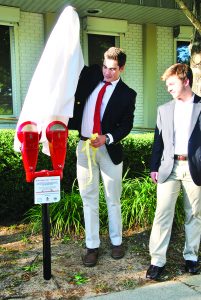 GBHS Future Business Leaders of America member William Welch unveils one of 7 parking meters that will be intricately placed around the city limits to encourage people to give to the area homeless. (Photo by Mat Pellegrino | South Santa Rosa News)

“Every time I drive by a homeless person…I can think ‘Here is a way my family was involved in a project that was sustainable and helped folks in a positive way.’ And I’m proud of my son for being a part of this,” Welch said.
Escarosa Coalition on the Homeless Executive Director John Johnson was on hand at the unveil and stressed the need for the meters in the community as there were reportedly over 1,000 homeless individuals in Santa Rosa and Escambia counties in 2015. But those numbers are declining thanks to organizations like Escarosa Coalition on the Homeless.
“I know a lot of us, when you pull up to a street corner and see a homeless person, we are torn over whether we should give money or not. As those thoughts weigh upon folks, I came upon the conclusion, as a service provider, we can do way more with a dollar or two than you can give the homeless person who is in a crisis moment,” Johnson said. “What we’ve done with the Better Way to Give proceeds is 100 percent of the proceeds go right to serving the homeless population. Year-to-date, we’ve probably housed 15 homeless men and women. We’ve provided ID cards, birth certificates…some of the basic things that you sometimes take for granted.”
Gulf Breeze Mayor Matt Dannheisser who works in downtown Pensacola said that he knows there is a need in this community to help the homeless and says this project aims to help those individuals.
“We all know homelessness is a real problem in most all communities. And we here in the Pensacola community are no different,” Dannheisser said. “I’m proud that the City of Gulf Breeze has decided to get behind this project. We all come across homeless who are down on their luck and we feel compelled to try to help them out.”