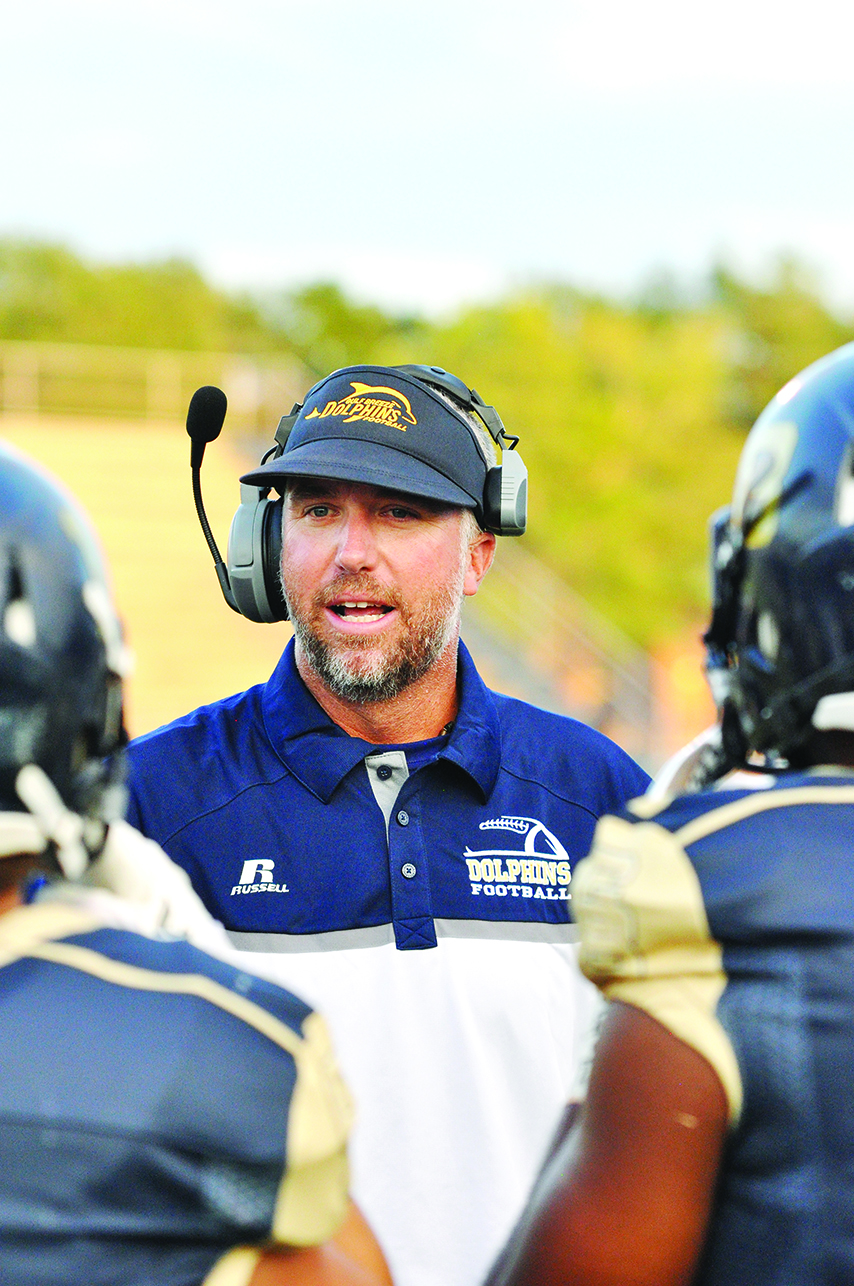 Ever since stepping up as the new Dolphin head football coach, Bobby Clayton has made strides to make the Dolphin team a success.
Over the past 6 weeks, Clayton has shattered records and brought more and more students to Dolphin Stadium thanks to his leadership abilities.
The 1993 Dolphin graduate stepped up to fill the shoes left by former head coach Chris Nemith following a sour 2-9 regular season last year. But area football has always been his go-to since graduating from GBHS. The new head coach served as Pine Forest High School’s assistant coach from 1998 to 2002 and eagerly accepted the position as the Dolphin head coach earlier this year when it became available.
So far this year, the new head coach has made waves pushing the Dolphins to a record 4-1 season, shattering records across the board. Clayton said he’s hopeful for what’s to come in the future, crediting his team’s turnaround to their positive attitudes.
“They have a totally different attitude. A ‘we believe in what we’re doing’ attitude,” Clayton said. “And the kids are pushing themselves and believe their hard work is paying off.”
And it’s showed. For the first time in the school’s history, the Dolphins went 4-0 following their win against Pine Forest. The Dolphins have only lost one game so far this season­­—against West Florida High School. But despite the minor loss, Clayton said his team is ready to move forward and face the rest of the season with a little help from students and parents.
“The parents, the community and the entire student body are awesome,” Clayton said. “Those guys are excited, and it makes it fun playing off of that atmosphere. I want it so bad for these guys. I want every play to be perfect.”
During last Friday night’s Homecoming game, Clayton said he was surprised at just how many Dolphins and Breezers flocked to the stadium to watch their big game against Milton—which they won 36-3.
“We were getting ready to warm up here at 5 p.m. and (quarterback) Tyler Phelps looked out the window and the student section was half full. At 5 p.m.,” Clayton said. “And he’s like ‘coach, that’s never happened before.’ That’s how great the students and parents have been to us. It keeps us going.”
Admittedly telling South Santa Rosa News “I never get nervous”, Clayton said the team is looking forward to their big rivalry game against Navarre, which takes place at Navarre High School on Friday, Oct. 28.
“We have two more games before then. We play Fort Walton (tonight), and Walton is good. We’ll line up and play toe-to-toe with those guys and we’ll play Pace after that,” Clayton said. “Luckily we have two home games before Navarre so we can spend some time here before we go down to Navarre, but I’m definitely not looking ahead. I always tell my guys to keep their head down and keep working one step at a time.”