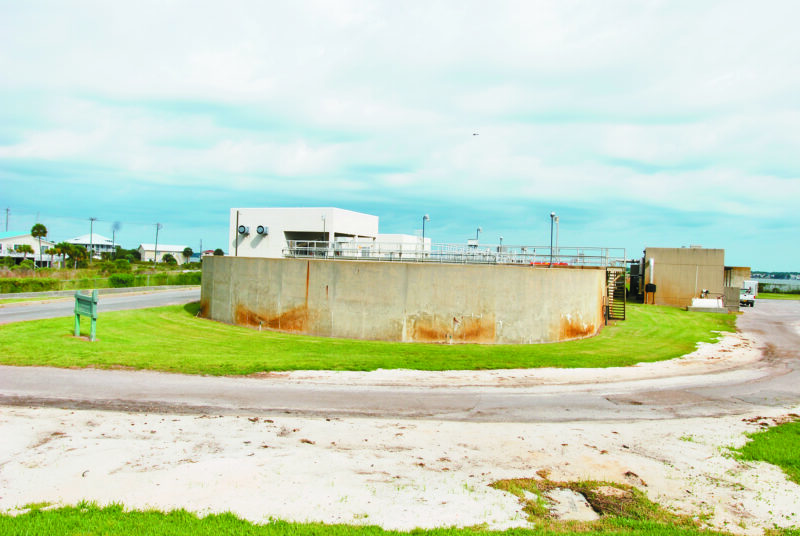 Presently the NBU facility located on Santa Rosa Island discharges up to 600,000 gallons of treated effluent into Santa Rosa Sound per day during peak usage periods.

“The county’s ultimate goal is to remove the (Navarre Beach Utilities) discharge from Santa Rosa Sound in anticipation of future regulatory changes and continued growth in the south end of the county,” said County Engineer Roger Blaylock in a Sept. 14 memo.

Blaylock’s memo addressed a March 15 letter the county received from HNWS regarding the potential transfer and some related financial data.

Blaylock’s memo outlined the pros and cons of the potential transfer and other long-term solutions, including the proposed joint development of a rapid infiltration basin project on Eglin Air Force Base property just north of Holley.

According to Blaylock, one of the issues would be what to do with the current Navarre Beach facility if services were transferred. “The financial analysis does not appear to include the cost of demolishing and abandoning the existing (facility).”

Additionally, Blaylock pointed out that cost projections for underwater infrastructure to transport raw sewage to a mainland treatment facility did not include a redundant systems to prevent service disruptions in the event of a problem with the submerged pipeline. “Any projected costs for conveying flow across the Sound should also include dual forcemains or some other system reliability measures.”

Blaylock also stated the economics of the potential transfer should be “advantageous” for NBU and HNWS and that the county shouldn’t subsidize either.

The original March 15 letter from HNWS stated that combining the utilities would be a “significant effort” with many issues which would need to be “debated and resolved.”

One of those issues would be increased costs of service to islanders, who could face an increase in excess of 63 percent if the county solely pursued the Eglin RIB project.

“By combining the utilities we belive that we can hold the beach rates at their current levels for the immediate future and reduce the burden upon HNWS customers as well,” stated the HNWS letter.

Another one of the questions Blaylock poised was whether or not HNWS would be eligible for FEMA funds for a declared disaster.

Today’s commission committee meeting starts at 9 a.m. at the County Administrative Complex located at 6495 Caroline Street in Milton. Video of the meeting may be streamed live or replayed via www.santarosa.fl.gov.

Other issues on this week’s commission agenda include:

Additionally, a public hearing is scheduled for 9:30 a.m. during Thursday’s commission meeting related to the proposed bear wise safety ordinance.