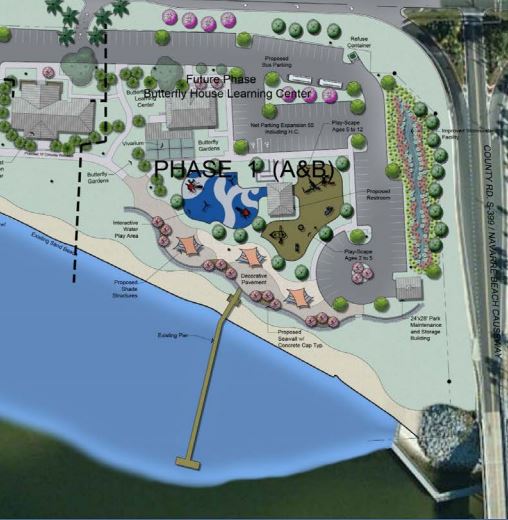 UPDATE Santa Rosa County Commissioners this morning voted to approve moving the funding of Phase I and II at Navarre Park to the board’s October 12 regular agenda. Commissioners will officially vote on Thursday.

Phases 1A and 1B of the Navarre Park Master Plan will be funded using $600,000 in District 4 recreation funds, $200,000 from the local option sales tax funds earmarked for District 4 recreation, $20,000 for ADA-compliance improvements, $215,000 reallocated from the defunct Navarre Community Center project, $230,000 from RESTORE Act funds (to fill in the borrow pit/pond) and $500,000 from tourist development tax reserves.

Additionally, $650,000 from tourist development tax reserves will be used to pay off the debt owed on the Navarre Visitor Information Center, which houses the Santa Rosa County Tourist Development Office. Future collections from a half cent of the third penny collected in tourist taxes from South Santa Rosa County, excluding collections from within the City of Gulf Breeze, will be allocated toward the Navarre Park improvements.

The TDC voted to recommend the board approve spending $650,000 out of roughly $2.5 million in tourist tax reserves to pay off debt on the south end visitor information center, freeing up $87,000 in annual funds to use toward the Navarre Park project.

Another $500,000 in TDC reserves was recommended toward funding Phases 1A and 1B of the project. However, an additional $43,000 per year was still needed to fully fund the first phase of park improvements.

“This is big for us,” TDC Chairwoman Liz Horton said of the park improvements plan, recommending allocation of half of the third and fourth penny collected in south end tourist tax revenues, excluding those collected in Gulf Breeze proper, toward projects in the south end of the county.

“Liz’s recommendation would get Navarre Park built,” said TDC Member Kyle Holley, who said he liked the idea because it also provides a revenue source for future projects.

Although Santa Rosa County Commission Chairman Rob Williamson, who represents the board on the TDC, had initially proposed using $1.5 million in TDC reserves to fund the park improvement plan, during the course of the TDC meeting, which lasted more than six hours, he came around to supporting the idea.

“The plan outlives the politician,” Williamson said, thanking the TDC for its support. “We’re talking about a significant investment that could transform the look of this area,” Williamson said of the Navarre Park project. “Instead of looking for ways to not to make this work, you were looking for ways to make it work. Today what I saw was people looking to be financially prudent. I’m very grateful today for your hard work on this project.”

Horton suggested TDC members attend Monday’s county commission meeting to show support for the project. “Anybody that could go I think it would be fantastic,” she said.