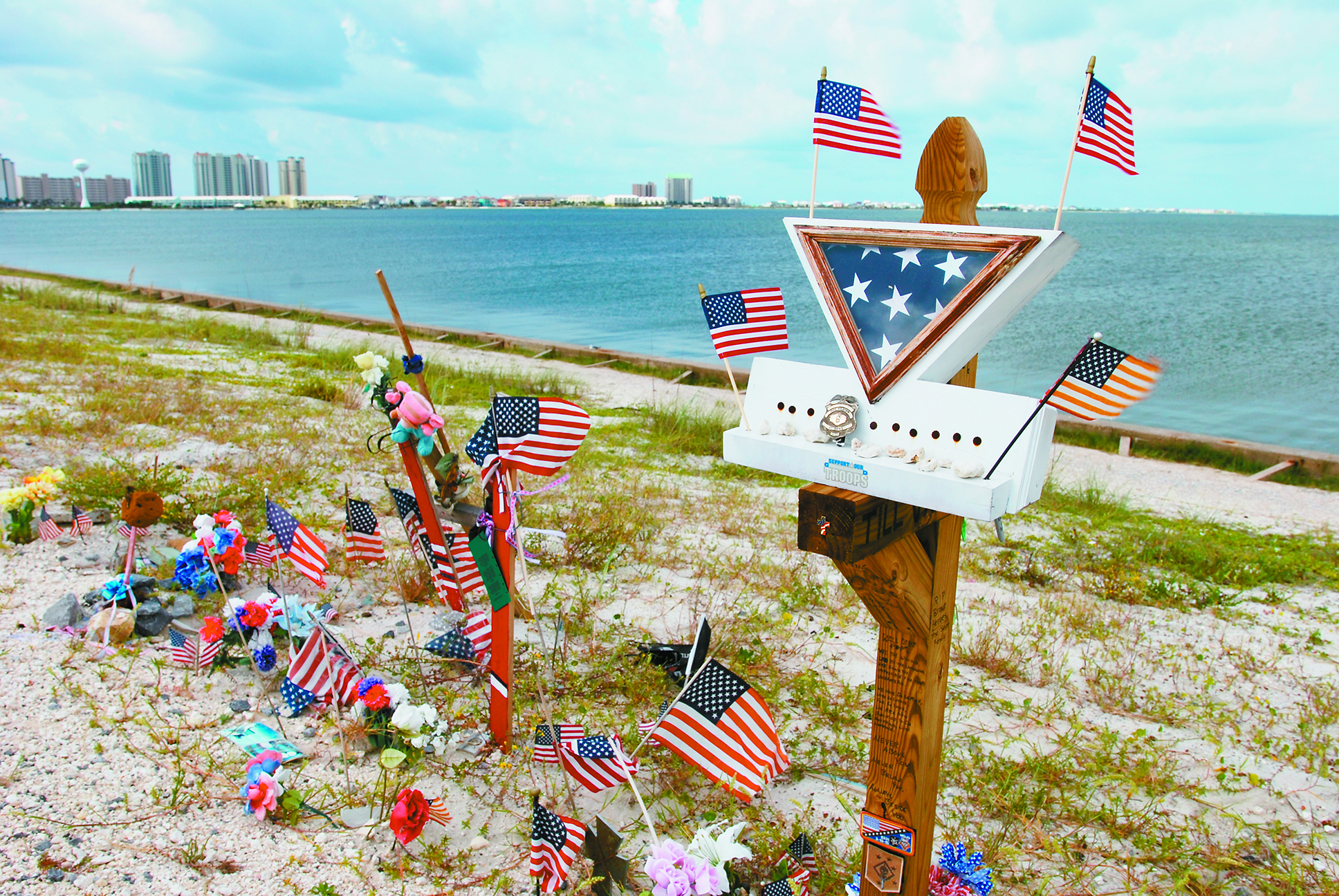 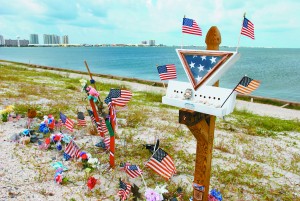 Currently, a small memorial is set up on Navarre Beach Causeway for the fallen servicemen. Leadership Santa Rosa Class 29 is expected to wrap up a permanent memorial for the servicemen on the one-year anniversary of the crash, which was just approved to be erected in Navarre Park. The memorial will also pay tribute to all men and women serving in the armed forces. (Photo by Mat Pellegrino | SSRN)

To pay respect to the 11 servicemen who perished back in March after the helicopter they were training on went down in the sound, Leadership Santa Rosa Class 29 is stepping up to help erect a memorial in Navarre Park , and is already on the road to raising the money for the project.
Back on Sept. 8, members of the leadership class approached Santa Rosa County Commissioners about a proposed site for the project in the heart of Navarre.
The group proposed the project should be to the left of the big gazebo in Navarre Park (looking towards the water). The group’s ideal completion date of the project is expected to be on the anniversary of the crash next year.
“They approved the site at the meeting,” said Michelle Tucker, a Leadership Santa Rosa class member. “We gave them an overall update on what we were doing and where we were at in our efforts.”
Back on March 11, the leadership class was on their way to Tallahassee for their class trip when they learned of the helicopter crash in the sound. Four Army National Guard soldiers and seven Marines were onboard the Blackhawk helicopter when, for unknown reasons, it plummeted into the sound near the Navarre Beach Bridge. Heavy fog was believed to have been to blame for the crash.
That same day, the leadership class decided that their class project should involve erecting a memorial for the servicemen who perished. The memorial will also pay homage to all servicemen and servicewomen who serve their country.
Sgt. Richard Aloy with the Santa Rosa County Sheriff’s Office who also serves on the Leadership team said so far funding has been flowing in.
“We want to be around that $100,000 mark,” Aloy said. “We have a website set up for donations, and 100 percent of the money donated goes towards the project. We’re tugging along.”
The design committee for the project received 2 submissions from the RFP process. As a result, the team picked Randy New, an art teacher at Pace High School to act as the memorial’s artist and general contractor for the project.
“We would like to have it dedicated around the 1-year anniversary of the Blackhawk incident,” Tucker said. “It’s an aggressive goal, but that’s what we’re going for.”
Leadership Santa Rosa Class 29 has already reached out to numerous organizations in an effort to help raise money for the event. The group held a special concert session at the Imogene Theater in Milton back on Sept. 11 and 12, and are planning to use a portion of the proceeds raised at the County on the Sound concert later this month to help fuel the project.
“The Blackhawk incident was a catalyst for this memorial to be built,” Tucker said. “Because we are such a highly populated military community…we want this memorial to be not just for them, but for everyone.”