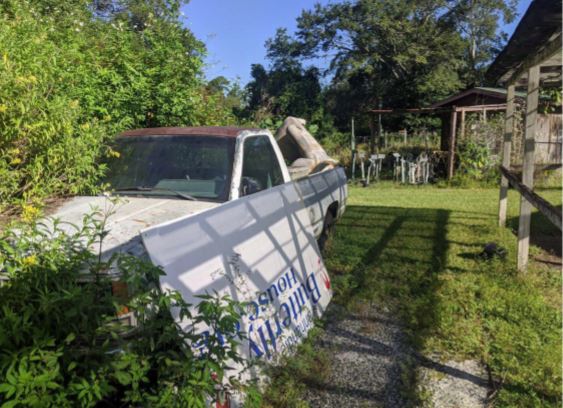 Around 30 people showed up at Monday’s commission meeting to ask for Panhandle Butterfly House to be returned to its volunteer board. Jenny Weber, who had lead PBH since 2014 said KSRB made a “hostile takeover” of PBH and isn’t capable to carry out its plans. Santa Rosa County photo.

KSRB is a nonprofit organization of which SRC is the largest contributor, and Cook recommended that the county withhold funding until KSRB completes the following steps:

Cook’s recommendation was on today’s county commission agenda. However, the agenda item was pulled because the nonprofit had not been personally notified that the issue would be discussed.

KSRB and the county administration in late 2021 were provided a copy of the audit, which was performed by Samuel S. Scallan, Internal Audit Director for the Santa Rosa County Clerk & Comptroller Donald C. Spencer.

“Revenues are declining and program expenses have exceeded income in each of the four years reviewed. KSRB is unable to pay its bills,” said Scallan. “There are minimal internal controls over the financial operations of KSRB and their board of directors’ exercise little if any control and oversight over its finances.”

Tabling the discussion resulted in multiple citizens to ask the board to keep the matter on the agenda, stating they had come out in cold weather to speak on the issue.

“We’ve already voted for it not to be on the agenda today,” said Commission Chairman Bob Cole, whose wife Sheila is on the KSRB board of directors.

Around 30 people had showed up to speak about KRSB at Monday’s commission meeting, including many former Panhandle Butterfly House volunteers. Some of those spoke during public forum, which limits speakers to four minutes.

“We want our Butterfly House back,” said Jenny Weber, who had led the PBH group since 2014 until earlier this year when she says KRSB made a “hostile takeover.”

Weber said KSRB is unable to carry on group projects, including an IMPACT 100 grant PBH wrote for building a vivarium at the new PBH location in Bagdad. She noted PBH volunteers would also assume the mortgage on the new facility.

Cole said Weber had exceeded her time, but another speaker yielded his time to her, so she continued, asking to hear from the auditor.

Weber also told commissioners she helped write an IMPACT 100 grant to build a new vivarium and that she and other former PBH volunteers are willing to take back the organization and ensure projects are completed. She said they are also willing to assume the mortgage on the facility.

Additionally, Weber confronted Cole about providing District 2 discretionary funds for KSRB after she had brought problems to light.

“We’re for the butterflies. They’re for the money,” added Theresa Shows, a PBH supporter.