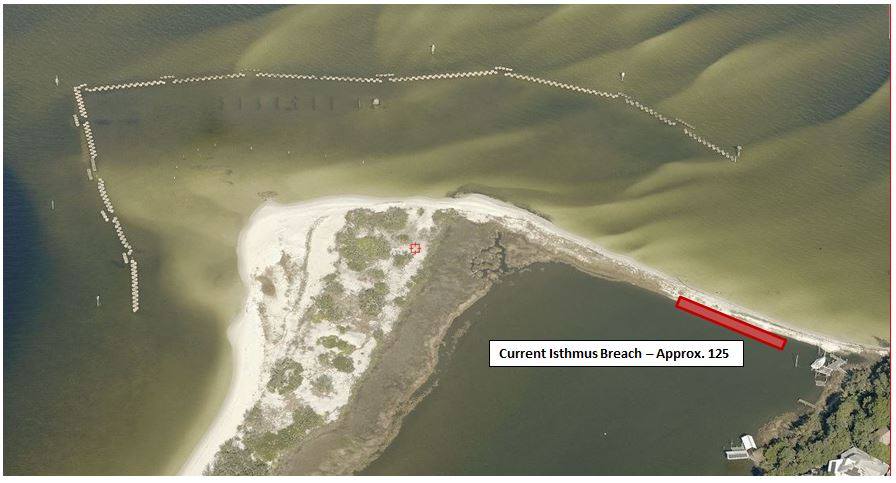 What the Mayor of Gulf Breeze quoted as being an “emergency situation” is being handled as such in an effort to save a popular plot of land from being completely swallowed by water.
Earlier this week, M and N Dredging Company started moving construction equipment into place near Deadman’s Island in Gulf Breeze Proper in order to do an emergency restoration on the plot of land after it was recently discovered that the isthmus had been breached.
Mayor Matt Dannheisser addressed the issue at the November 7 city council meeting claiming he noticed the isthmus had been breached during his monthly walk on the popular local spot. The breach is making it nearly impossible for visitors to walk from the mainland to the island. The startling find pushed the city to jump into action to save the popular local/visitor spot.
The city eventually approved spending $100,000 out of undesginated reserves to pay M and N Dredging to make 500 linear feet of breakwater repairs and to relocate sediment to keep the island from completely going underwater.
During the construction project, sand will be redeposited from the island designated spoil site and Gilmore Bayou Estuary to the Island’s isthmus. The second phase of the construction project will be the construction of a formidable breakwater and living shoreline of the isthmus.
City Manager Edwin “Buz” Eddy told South Santa Rosa News that the city had to pull an emergency permit to save the island. When M and N Dredging is done with their emergency restoration project, there will still be concern regarding the future of the island, but Eddy said the city is looking to pull other permits to fully restore the island.
“The plan right now is to take advantage of the emergency permit (from DEP) and put in breakwater,” Eddy said. “Down the road they want to put a bigger breakwater in that will withstand bigger storms.”
During the Nov. 7 meeting when the state of Deadman’s Island was addressed by Dannheisser, concern rose over whether or not the Pensacola Bay Bridge Project has anything to do with the current state of the land. Deadman’s Island committee member Robert Turpin addressed the city about the concern at a November city council meeting and told the council that what’s happening to the land now is similar to what happened when the current bay bridge was built decades ago. At this time, it’s unknown whether the bridge project is the cause of the breach. But Turpin said that the island has breached and healed itself on numerous occasions.
Eddy said that the city just recently drafted a letter that they are going to send to the various agencies that are working on the Pensacola Bay Bridge project to address to them the concerns they have surrounding Deadman’s Island, and to determine whether or not the contractors know if the project is having any effect on the island or not.
Back at the Nov. 7 city meeting, Dannheisser addressed major concern over the future of the island after his recent visit to the site.
“I’ve been out there on a monthly basis for years and I could not believe what I saw. There is direct flow from the bay into the bayou—and I don’t know what the ecologic effects are on the island and on the estuary is—but, it’s not just a small bridge. It’s a massive bridge,” Dannheisser said. “I don’t know, maybe I’m overreacting. Maybe it’s a temporary-type thing. On the other hand, maybe it’s far more serious. What are the consequences if we don’t act now; will it be something that’s irreversible?”