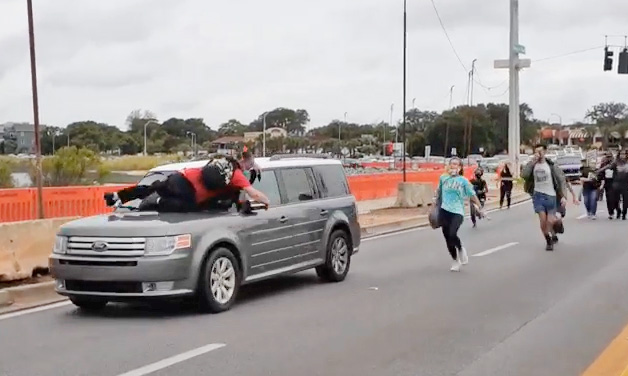 “Our right to peacefully assemble is one of our most cherished as Americans, but throughout the country we’ve seen that right being taken advantage of by professional agitators, bent on sowing disorder and causing mayhem in our cities,” said Governor DeSantis. “I will not allow this kind of violence to occur here in Florida. The legislation announced today will not only combat rioting and looting, but also protect the men and women in law enforcement that wake up every day to keep us safe. I look forward to working with the Florida Legislature next session to sign this proposal into law.”

“Peaceful protesting is a constitutional right, but looting and disorderly rioting are not,” said Senate President-Designate Wilton Simpson. “We will continue to stand with our brave law enforcement officers as they protect and serve. This bill is a way to ensure that all Floridians can live in a safe and secure environment. I commend Governor DeSantis for his commitment to public safety.”

“Violence and destruction are the tools of terrorists, not reformers,” said House Speaker-Designate Chris Sprowls. “We live in a country founded on the power of words, and no group of self-appointed activists and anarchists can be allowed to deprive others of their life, liberty or property. I’m proud to stand with Governor DeSantis to say that in Florida we will respect the right of people to protest peacefully while defending the rule of law.”

The Combatting Violence, Disorder and Looting and Law Enforcement Protection Act has three components, outlined below:

I. New Criminal Offenses to Combat Rioting, Looting and Violence

“Protesting is a basic constitutional right of free speech, which I wholeheartedly support,” said Polk County Sheriff Grady Judd. “Violence, rioting, looting, and vandalism are illegal acts – not rights. Nothing else matters if you and your children aren’t safe. Crime is at a 48-year-low in the state of Florida and we intend to keep it that way. Criminals who destroy and tear down our communities and victimize others must be held accountable, through quick action and swift punishment. We are sending a message that we will not sit back and allow violence to run amuck, and we will arrest violent criminals, and those who loot, riot, and vandalize – guaranteed. I applaud Governor DeSantis’ initiative to ensure that the safety of Florida residents and visitors comes first.”

“On behalf of the Florida Police Chiefs Association and over 900 of Florida’s top law enforcement executives from across every region of the state, we thank Governor DeSantis for his strong leadership and dedication to maintaining public order and keeping the peace,” said Florida Police Chiefs Association President and Satellite Beach Police Department Chief Jeff Pearson. “The measures he put forth today are urgently needed to protect the lives and property of every Floridian.”