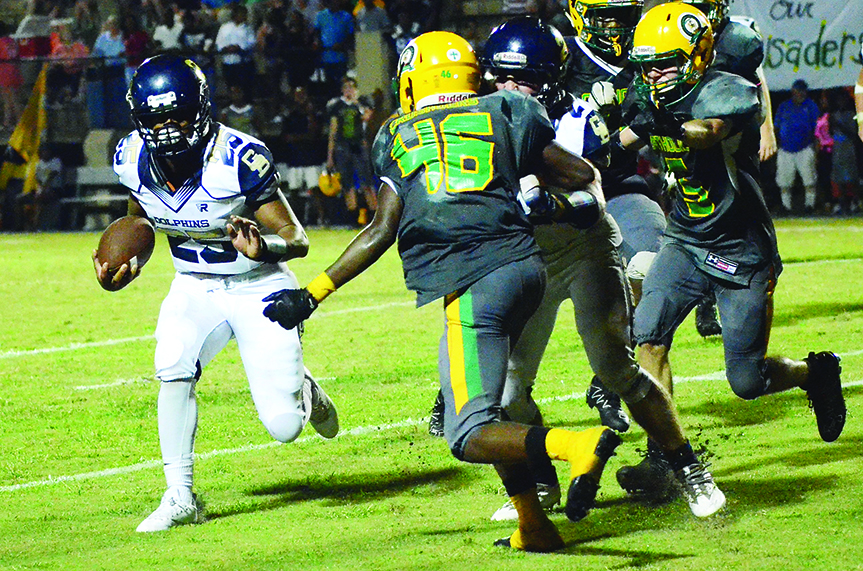 Prepare the fattened calf, because it seems the prodigal son has returned to Gulf Breeze High School after Bobby Clayton’s Dolphins clenched a 36-21 victory over Pensacola Catholic High School last Friday night.
The win snaps a nearly decade-long series of losses to PCHS and grants the Dolphins their first win over the Crusaders since 2006 – the year Clayton left his four-year stint as offensive coordinator at Gulf Breeze for the same position at Pine Forest.
Of course there is more to the team’s success then just Clayton’s return, and the head coach was quick to credit his players and their commitment in the weight room five days a week when parallels were drawn between the two points.

“…So thats the big change — they are bigger, faster, and stronger than previous years,” Clayton said as he explained the change in the team’s performance. “We got in the weight room and we worked hard in the off season, these kids since I got hired — and I’ve said it every interview I’ve done — these kids have worked since February when I got hired and I’ve asked them to do some crazy things,” he said. “We’ve pushed tractors, we pushed trucks, we rolled in the sand at Pensacola Beach during summer workouts — and they keep standing up man, so that means they are hungry for it and they’ve done everything I’ve asked ‘em to do.”
The first half began to paint an accurate picture of the match to come when the Crusaders lost sophomore free safety Patrick Sanders to an injury, but did well to answer Gulf Breeze’s early score. Despite the effort from the PCHS defense, the Dolphins’ 2-point conversion option from Parker Baynes to Matthew DeMahy gave them a slight 8-7 lead going into the second quarter.
Gulf Breeze was able to use the momentum to extend their lead when Tyler Dittmer rushed for his team’s second touchdown of the night and put the Dolphins up 15-7 after Spencer Wirth kicked the extra point.
The onslaught from Gulf Breeze’s offense continued in the second half and unfortunately, so did Catholic’s injury problems — losing senior running back Abram Smiley and junior tackle Ethan Watson to separate injuries in the third quarter. 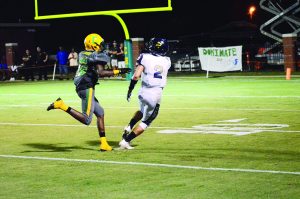 Pensacola Catholic’s Tykies Hestle hits Tristan Covell as he catches long pass down field from Phelps for a 1st and goal in the first half of the game. (Photo by Christian Graves | South Santa Rosa News)

The rough play and high spirits that come with a rivalry game forced both coaching staffs onto the field shortly after the start of the third quarter, when a couple of opposing players got physical before being broken up by the referees.
Despite the distraction, Gulf Breeze did well to keep focused as a team and dominated the second half offensively – mostly through the work of their senior quarterback Tyler Phelps, who threw for 265 yards against PCHS.
“So yeah, I mean it’s always chippy — Gulf Breeze vs. Catholic — it’s a rivalry game, it’s huge Phelps said about the scuffle after the game. “It was a special teams play and that happens on special teams plays — kids come in and they get chippy.
“It was a little unnecessary both ways, it shouldn’t have happened and the benches coming out shouldn’t have happened, but luckily the refs took care of it and that was that.”
Covell came up huge for the Dolphins’ offense as well, putting up 200 yards during the game as a reliable target downfield. Unlike last season, Gulf Breeze revealed a more versatile spread with their offense and showed they could move the ball on the ground as well, with sophomores Tyler Dittmer and Carl Taylor rushing for over 100 combined yards.
Although Gulf Breeze dominated the offense, there are two sides to the football team and had it not been for the Dolphins’ defense that shut down the Crusaders in the second half, the results could have looked much different.
The Crusaders held Gulf Breeze to one touchdown in the fourth quarter and forced the Dolphins to fight for every inch during the game — scoring one themselves in the final minutes to make the score 36-21. At the end of the night however, the PCHS offense was too slow on the draw and failed to keep their drives alive in order to create scoring chances – converting only 4 out of the 14 third-down opportunities.

Gulf Breeze has its second home game of the season tonight, a non-conference game against Northview High School that is set to kickoff at 7 p.m.
The Dolphins are going into this week’s game having outscored their first two opponents 74-50 and will be looking for their third win in-a-row. Northview is coming off of a 21-14 win over Escambia Academy — a strong rebound from their season debut against Crestview High School that resulted in a 70-0 shutout.