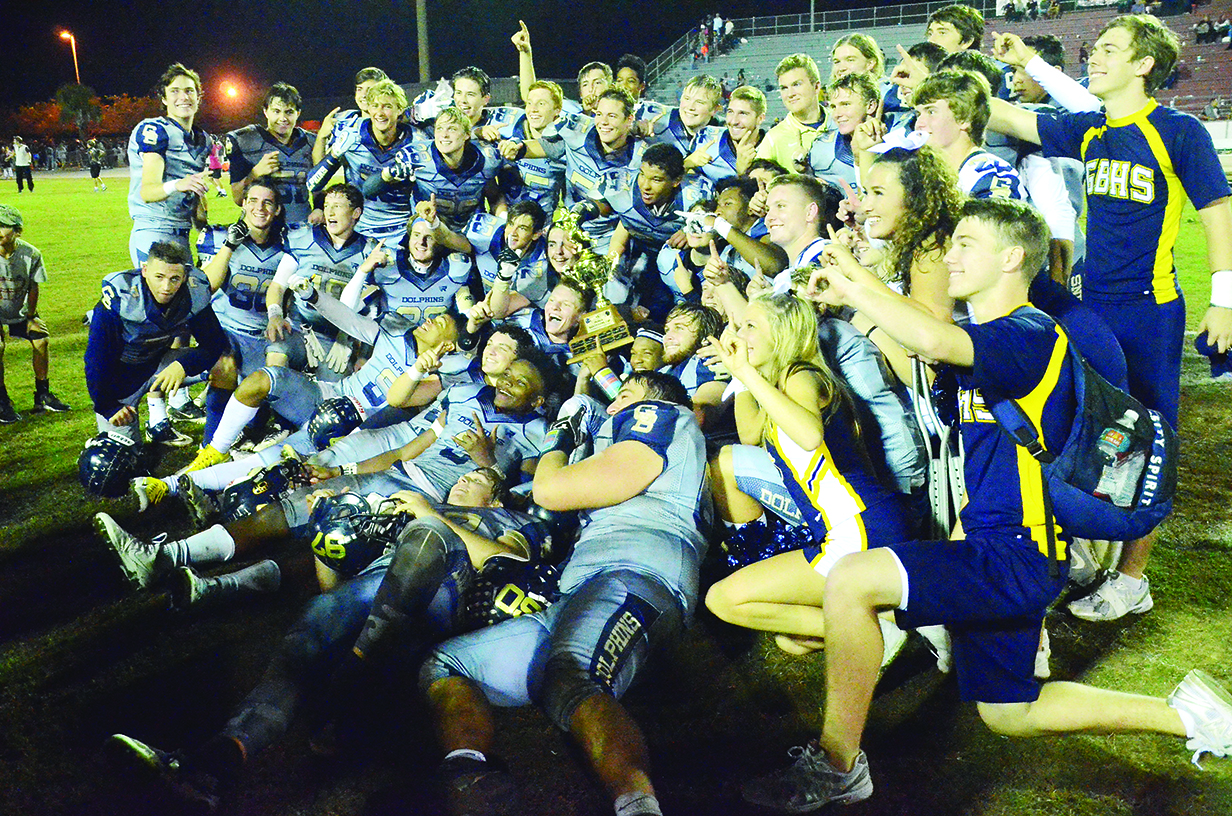 It only took 27 years, but Gulf Breeze High School has been crowned district champions yet again after a tumultuous crowd cheered the Dolphins to a 31-28 victory over Navarre High School last Friday night in the District 2-6A Championship.
The victory grants the Dolphins its first district championship since 1989 and foiled the Raiders hopes at a 10th consecutive victory in the Beach Bowl. Gulf Breeze has faced similar circumstances earlier this season, snapping an 11-game losing streak to Pine Forest and two other 9-game losing streaks to Pace and Pensacola Catholic.
“We won, it worked, it don’t matter now how — what an outstanding game,” Clayton said after the match. “Navarre is an outstanding team; unbelievable running backs, their defense is intense [and] gets after you, and we just hung in there with them — fortunately for us, they fumbled there at the end of the game, but dang what a ball game. 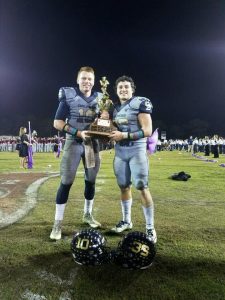 Navarre’s quarterback Caine Adamson took over with less than 2 minutes on the clock and led his team down to the 8-yard line with a couple of drive-saving plays. With less than 10 seconds left on the clock, the picturesque drive took a slight downturn and with it Navarre’s chance at a championship. Adamson was forced to pounce on a loose ball after a bad snap, and was eaten-up in the backfield by Gulf Breeze’s defense.
The Dolphins’ defense was solid from start to finish in the game against Navarre, and forced the Raiders to try a field goal in the opening drive of the game — tipping away the attempt. Navarre answered with a big defensive play of its own on the following drive when Xavier Fernandez read the pitch to Tyler Dittmer and tackled the running back for a loss of 13 yards to bring up fourth-and-20.
Both teams’ defenses had a strong showing, but the Raiders’ offense scored first and seemed to dictate the pace of the first half. Caine Adamson put Navarre on the board with three minutes left in the first quarter when he faked a handoff to Michael Carter and ran around the other side of the Dolphins’ defensive line for a 5-yard rushing touchdown.
Tyler Phelps and the Gulf Breeze offense answered with a well-executed 31-yard pass to Cole Sheppard on the following drive, who managed to turn and catch the ball while he was falling through the air after Jordan Williams’ attempted tackle. Despite generating some momentum, the Dolphin offense found itself on the back foot, chasing Navarre’s lead going into halftime 21-17.
The second half brought an invigorated Gulf Breeze offense, who received the kickoff after electing to kick at the beginning of the match. Despite completing a couple of nice passes to Tristan Covell and Sheppard, the drive proved unsuccessful overall and ended with a fumble from Phelps on the 48-yard line.
Navarre’s next drive ended with their own troubles after running back Michael Carter failed to convert on fourth-and-inches from the 42-yard line. The Dolphins would go on to take the lead for the first time on the following drive. With less than a minute remaining in the third quarter, Phelps floated a 10-yard pass to Parker Baynes to bring the score to 24-21 after Spencer Wirth’s extra point.
Both teams finished the night with 373 total yards, with the majority of the yards coming from either side’s quarterbacks. Phelps led the contest through the air with 327 passing yards to Adamson’s 222 total passing yards.
Gulf Breeze (8-1) secures their place at the top of the district with the win and will host J.M. Tate High School (8-2) at home in the 6A Regional Quarterfinal on November 11 at 7 p.m. Navarre (8-1) will travel to Escambia High School (4-5) for the first round of playoffs.

Gulf Breeze travels to Crestview High School (9-0) to take on the Bulldogs in a non-conference matchup. Crestview is coming off a 27-21 district win over Niceville High School (8-1), while the Dolphins recently clenched a district title for the first time since 1989. Kickoff time is scheduled for 7:00 p.m.
Navarre travels to Niceville to take on the Eagles before for the Raiders’ regional quarterfinal match against Escambia High School. Both sides are looking to rebound from district losses and are scheduled to kickoff at 7 p.m.