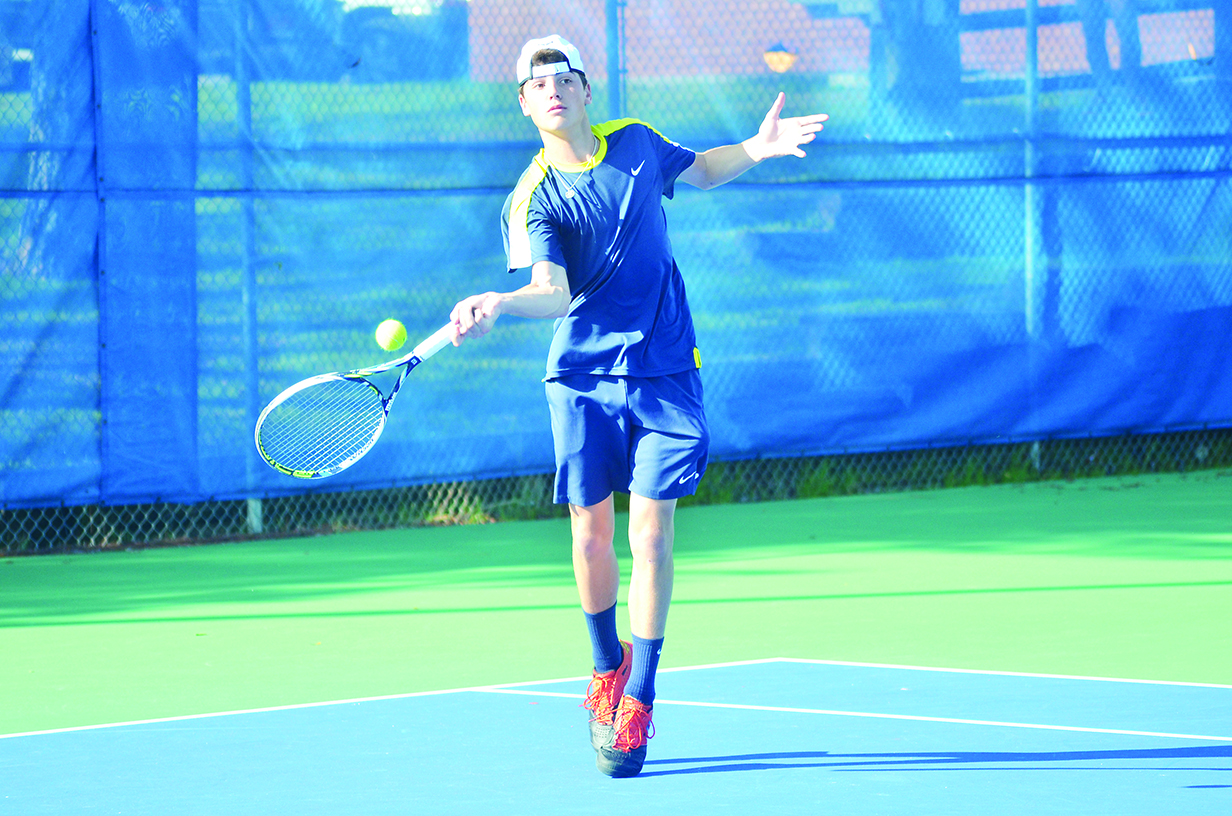 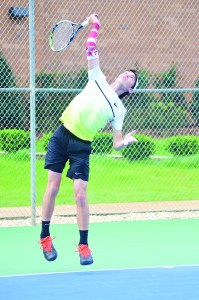 Gulf Breeze High School brought home the first place trophy after blowing away the competition on Monday and Tuesday during a windy District 1-3A Championship tournament.
The Dolphins had one player from each section advance to the final round – going undefeated throughout the entire tournament except for the final girls’ No. 2 singles and No. 1 doubles match which went to Booker T. Washington High School.

Monday’s competition began a little off-schedule due to the fact that the courts were wet from the previous night’s rainfall.
However, the late start time failed to throw-off an overpowering Gulf Breeze team that only dropped two games in the first round of the boys’ singles matches, and four games for the girls’ side. 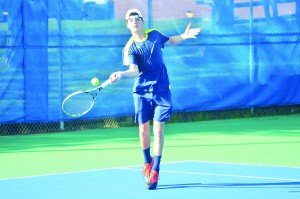 Dolphin Hayden Essary goes up against Tate’s Jared Sorenson in the first match of the competition on Day One. (Photo by Christian Graves | South Santa Rosa News)

Hayden Essary got things started for the Dolphins when he faced off against Tate High School’s Jared Sorenson in the No. 1 match of the first round, quickly getting five games into the lead with the help of a hard serve that Sorenson struggled to return.
Essary would sweep the first and second set to move on to the Semifinal match against Sean Ennis of Pace High School, who proved a bit more difficult to finish. Ennis’ returns allowed him to take three games of the first set and one in the second, but he fell short of seriously threatening Essary’s constant lead.
Joel Boles took on Booker T. Washington’s Shane Peavy in the first round of the second seed matches. Boles dominated the court, taking advantage of Peavy’s personal mistakes in order to easily sweep the first two sets and advance to the semifinal round against rivals Navarre High School.

Boles played Samuel Griffin in the second round of the boys’ No. 2 matches, who fought back to make it to the semifinals after a 6-2 defeat in his first set of the previous round. Boles did well to stay focused and swept the match in two sets, contributing another two points to Gulf Breeze.
Collin Scheufler also defeated Navarre in the No. 3 seed semifinal after overcoming Milton High School in the first round, beating Brayden Caldwell in two sets by a decisive 6-1, 6-0 in order to move on to the final. Sky Haynes continued the Dolphins’ success against the Raiders in the tournament and swept his No. 4 semifinal match against Ian Jones.
Brenton Byrd finished up the singles matches for the first day and swept both of his contests to put Gulf Breeze in first place with 10 points for the boys’ side headed into the doubles matches.
The score would increase to 12 after Essary/Boles and Scheufler/Haynes won their respective matches and would put them one point ahead of Pace going into the second day of competition.

Caraline Scheufler led the girls’ team in Monday’s competition, sweeping her first two matches to move on to the final round. Scheufler got the tournament kicked off in the No. 1 spot with a match against Kyla Cheek of Pine Forest in the opening round.
Scheufler looked much more comfortable with her racquet in her hand then her counterpart, who was spotty on serves and had trouble handling the heat of some of Scheufler’s harder shots.
In the No. 2 seed, Maddie Bookout also drew a match against Pine Forest for the first round – facing off against Chloe Stibolt. Bookout made quick work of her opponent and seemed to be at the top of her game, easily advancing to the final round after she swept her match against Tate’s Megan Zimmerman.
Grace Allen kept the momentum going for the girls’ side in the No. 3 opening match against Tate’s Sally Van Raemdonck. After losing the first game, Allen rallied back to easily control the match with well-placed shots that forced Van Raemdonck to exert her energy attempting to return them. Allen would move on to the final after picking up her second match of the day with a win over Washington’s Avery Bills.
The Lady Dolphins finished up the singles competition for the first day with a pair of wins from Marley Taylor in the No. 4 spot and Mary Miles Hitchcock in the No. 5 seed. The doubles tournament opened with Scheufler/Taylor teaming up in the No. 1 seed to defeat Bonucchi/Zimmerman. Allen/Bookout would also come out on top in their No. 2 match against Ecambia High School in order to advance to the finals.
The two wins in the doubles’ contest gave the Lady Dolphins 12 points heading into the final day of District competition and put them at the top of the table above Washington, who was seated second with 11 points. 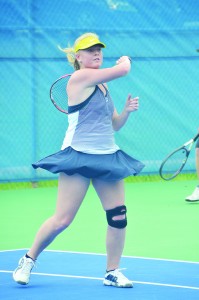 Tuesday brought with it just as many clouds as the day before, but the court stayed dry and things picked up where they left off in a breeze– beginning with the finals of the boys’ and girls’ singles matches.

Hayden Essary took on Booker T.Washington’s No. 1 seed Michael Berryman in the championship match and faced his strongest resistance of the tournament. Although Essary took both sets by a wide margin (6-1, 6-2), the sets themselves were close and Berryman did well to return Essary’s volleys and contest every point.
Joel Boles found himself up against Pace High School’s Andrew Rabinowitz for the third time this season, having won every match in the regular season but never without a strong effort from Rabinowitz. The match included another impressive rally between the two No. 2 seeds, tallying 20 hits back-and-forth in the seventh game of the first set – which Boles won after Rabinowitz’s return hit the net.
Boles would go on to take the set 6-2 and sweep the second to end the match and give him a 3-0 record against Rabinowitz on the season.
“Well he’s got a strong forehand and a pretty good serve and what I didn’t do the last two matchups was hit the ball deep and play my forehand more,” Boles said about this season’s matchups with Rabinowitz.
“So [today] I played a little behind the base line, used my forehand more and just kept making him hit one more ball and he started to self-destruct,” he said.
Collin Scheufler, Sky Haynes and Brenton Byrd all played their championship matches against Pace as well, who would take runner up in the boys’ competition. Scheufler faced off against Logan Brabham in the No. 3 spot and won both sets (6-1, 6-3).
Haynes took on Michael Ennis and swept the first set before losing one in the second set to win the No. 4 seed final for the Dolphins. Byrd swept the No. 5 spot against Michael Batterton to finish the singles’ competitions for the boys’ tournament and be the only Gulf Breeze player to complete the tournament without dropping a single game.
Essary/Boles defeated S. Ennis/Rabinowitz in the No. 1 doubles match while Scheufler/Haynes secured the No. 2 doubles final against M. Ennis/Batterton to win the boys’ District Championship for the Dolphins by a final score of 21-13. Pace took second place for with 13 points and Washington placed third with six points.
Girls
Caraline Scheufler found herself facing off against Washington’s Emily Dawson in the girls’ No. 1 seed final. Scheufler fought her way back after being down 1-2 in the first set by cutting down on her errors and pulling out the 2-0 victory (6-3, 6-0).
Abigail Lipnicky gave Washington its lone victory in the singles’ final after she fought back from a 6-3 defeat in the first set of the No. 2 match to beat Maddie Bookout 4-6 in the second and 6-2 in the tiebreaker set.
Grace Allen was the only Lady Dolphin to not face a Washington challenger in the final round and instead took on Jordan Wallace from local rival school Navarre in the No. 3 spot. Allen did well to pull out a slim victory over Wallace (6-2, 7-6) which kept Gulf Breeze on track for a first place finish.
Marley Taylor swept away Brooke Gaston in the first set of the No. 4 match and only dropped two games in the second in order to win the final championship and contribute another point for the Lady Dolphins.
Mary Miles Hitchcock dropped the second set of the No. 5 match against Audrey Basinger, but was able to pull out wins in the other two sets 6-1 to secure Gulf Breeze’s position at the top of the singles’ championship.
Dawson/Lipnicky teamed up for Washington in the No. 1 doubles final and achieved the Wildcats’ second win of the District final over Scheufler/Taylor (6-3, 6-2). Allen/Bookout teamed up to take on Gaston/Luana Souza in the No. 2 doubles match and swept the first set, losing five games of the second before taking it 7-5.
The victory secured the girls’ District 1-3A Championship title for Gulf Breeze by a score of 19-15, the runner-up was the Washington Wildcats with 15 points and Navarre in third with eight points. 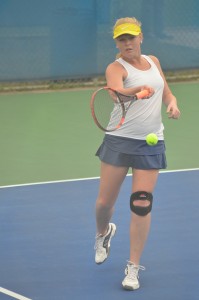 The boys will host Niceville High School in the Region 1-3A Championships next Tuesday.