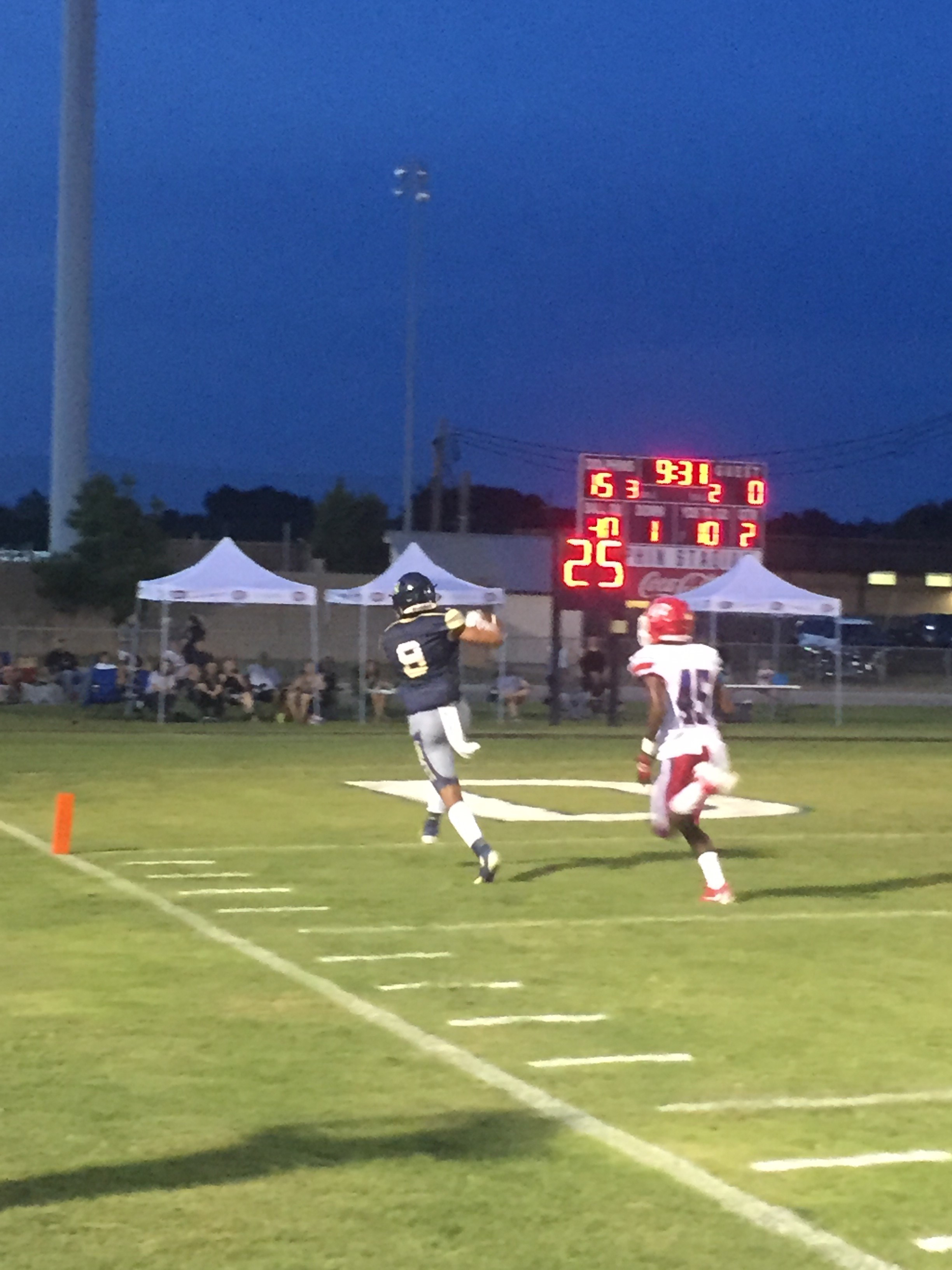 The Gulf Breeze Dolphins open up the 2017 season in dominate fashion, beating the Pascagoula Panthers 36-0 for their first win of the season.

To open up the first game and first play of the 2017-18 season, running back Tyler Dittmer took a pitch from quarterback Dylon Kelley 62 yards for a touchdown. This would be only one of the big gains throughout the night for Dittmer. On the third drive of the game for the Dolphins, after a Panthers missed field goal, Dittmer had runs of 37 yards on one play, and 9 yards on another. This would set up Kelley to throw a 33-yard touchdown pass to his wide receiver Spencer Segal, who stood wide open in the end zone. On that drive, the Dolphins ran only 5 plays for 80 yards to extend their lead 15-0 with 2:41 left in the first quarter.

After the Dolphin defense was able to hold the Panthers and force them to punt, with 37.6 seconds left in the first quarter, return man Nate Herrick muffed the ball and the Panthers recovered.

Following the Panthers failed attempt to convert on fourth down, Kelley would connect with Daniel Brayton for a 40-yard touchdown pass with 9:30 left in the second quarter. The Dolphins would take a commanding 22-0 lead. Later in the second quarter, after the Dolphins defense would force another Panther punt, Dittmer would continue his dominance. On one of the carries, he would break off a 44-yard run to put the Dolphins in Panther territory. This would later set up a 30-yard touchdown pass from Kelley to wide receiver Bryce Callahan. The Dolphins would stretch their lead to 29-0.

“Ever since we lost that Tate game last year, I was right back in the gym the next Saturday morning saying I need to get better,” said Dittmer. “Coach Clayton said I was going to be the workhorse after losing so many seniors last year, so I owe it all to that. We’ve been working since the day we lost to Tate.” He would finish with 265 yards on 20 carries and one touchdown.
Late in the second quarter, the Panthers looked like they would have a chance to score after a couple runs by running back Dalvin Abney. The Dolphins defense would then hold their ground when safety Walter Yates III intercepted the quarterback and returning it 18 yards. The Dolphins would go into half time with a comfortable 29-0 lead over the Panthers.

In the third quarter with 7:30 left, Kelley would fumble the ball and Pascagoula would recover and gain momentum. Still, the Dolphins defense would come out onto the field and force the Panthers to a 3-and-out. The Panthers would get help after Gulf Breeze was called for a personal foul late hit. Nevertheless, the Dolphins would hold the Panther offense to another 3-and-out. They would attempt to convert on fourth down, but failed after the defense stopped the run attempt. Senior linebacker Noah Young was heavily involved in stopping the Panthers rushing attempts.

“I try to be somebody to look up to,” said Young. “Coach always tells me not to be a me player but a team player. He taught me the values of a team and that’s probably one of the most important things.” The Dolphins shut out Northview and Walton High School last season. They would go on to finish the season 9-2.

The Dolphins were not done scoring for the night. In the fourth quarter with 3:22 left to play, Kelley would hook up with Callahan for another touchdown. The lead would be extended to 36-0 and the Dolphins would cruise to victory. Kelley finished the night 11 for 21 with 153 yards and four touchdowns.

The Dolphins will host Pensacola Catholic this Friday. The game starts at 7 p.m.