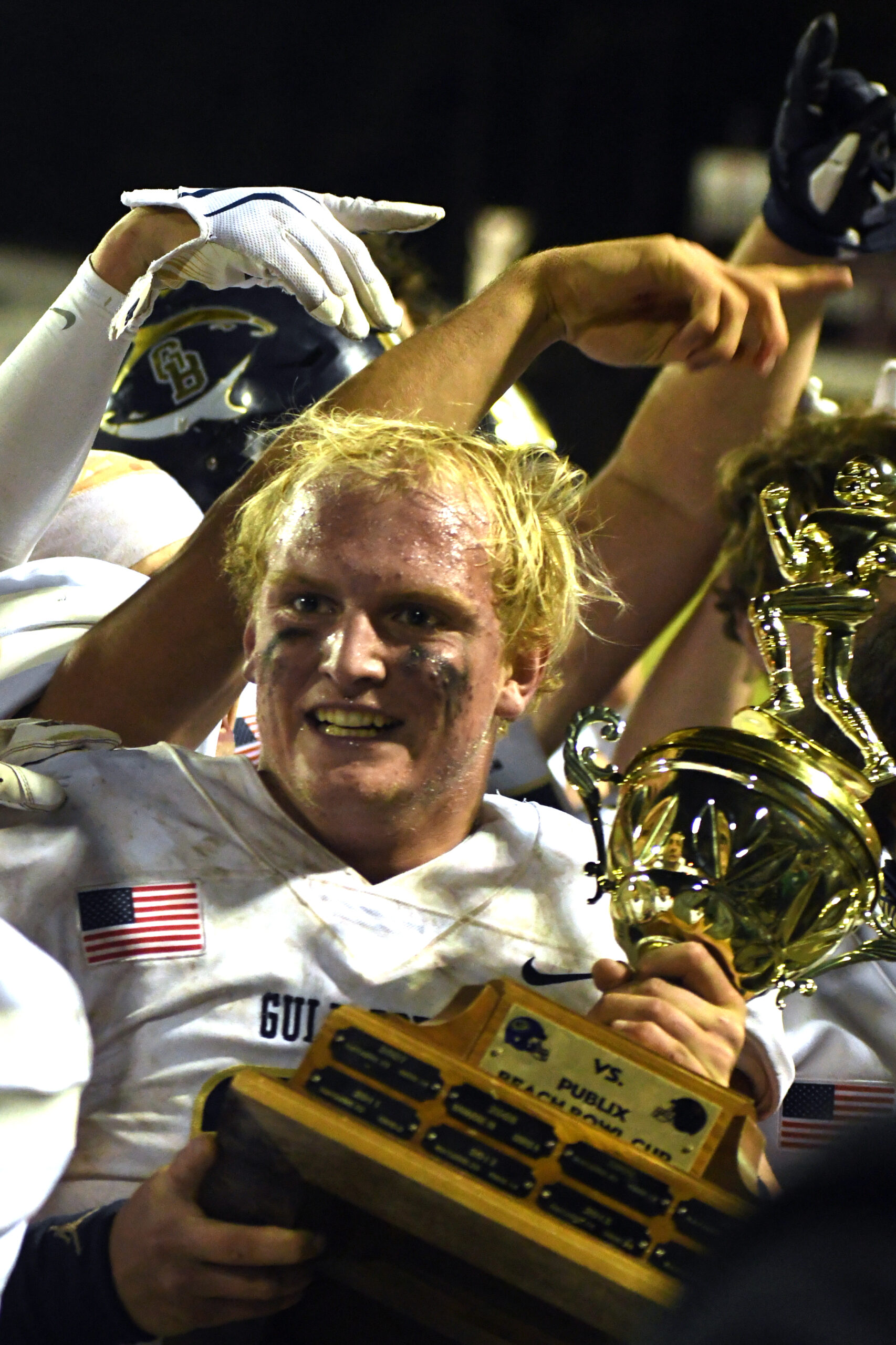 Gulf Breeze turned the tables on Navarre 38-26 in the regular season finale for both football teams.

The Dolphins redeemed themselves in many ways: they claimed the Beach Bowl trophy for the first time in five years, they won again after two straight losses this season, and their 7-3 record puts them in contention for a spot in the playoffs.

“I asked them to fight their guts off, to go compete,” Gulf Breeze head coach Bobby Clayton said. “Who needs an offense when your defense can score three touchdowns for you? Our defense played exceptionally well.”

Their postseason will be decided and announced Sunday afternoon.

Navarre had an outside shot to pull off a last-minute comeback in Russell Stadium. Trailing 31-26, they had the ball and a little time on the clock to work with. The Raiders completed a few passes and looked to be setting a stage, but somehow Gulf Breeze defensive end Phillip Dillard ended up with the ball in the Raider backfield and outran everyone to the end zone with just three seconds left on the game clock.

That was the fourth of five Gulf Breeze takeaways on the night, and their third defensive score. Andrew Thorn ran in a nearly 80-yard fumble recovery in the first half to give Gulf Breeze a 14-7 lead. Defensive lineman Shamane Walker scooped up a loose ball and scooted 50-plus yards for another touchdown.

“Coach said pedal to the metal. Everybody came together in key moments,” Walker said.

What eventually proved to be the game-winning touchdown was an 81-yard bomb Alberson threw to Bryson Rouillier early in the fourth quarter.

“This is for the city of Gulf Breeze. They’ve supported us the entire year, even when we had some bad years,” Thorn said, after accepting the Beach Bowl trophy. “I’ve been waiting four years to get a scoop-and-score. I play baseball, it was like a short-hop.”

The last time Gulf Breeze took possession of the trophy was Oct. 28, 2016. They’ve only held it twice since the trophy was introduced as a reward for winning the rivalry game.

Navarre quarterback Hunter Pfiester started while Kyle Chambers was in civvies due to an injury.

The Raiders run-pass mix worked against the Dolphins. On the opening drive of the game, Navarre scored and milked the clock down to just 5:24 remaining in the first quarter. Chris DeCorte capped the drive with a one-yard run.

But on their next drive, Pfiester was picked off, and the Dolphins took over on the Navarre 25-yard line. Bing-bang-boom, quarterback Battle Alberson hit Carson Hepworth at the right-side pylon for six points. The point-after try evened things up.

The Raiders had a couple takeaway, too. Their second was a fumble recovery at their own 25-yard line, which lead to Pfiester catching Terence Marshall in full-stride for a 45-yard touchdown late in the third quarter and cut the lead to just 21-13.

Marshall scored another touchdown taking a kickoff the length of the field, drawing the score to 28-19 in the last nine minutes of the game.

“It was electric. You love to be in a game like this,” said Navarre defensive lineman Lemmy Wilson. “Obviously, turnovers cost us, but we stayed in the game. I can’t be mad at the process.”

Navarre ends the season with a 5-4 record, which is its lowest team record since the 5-5 season of 2011.