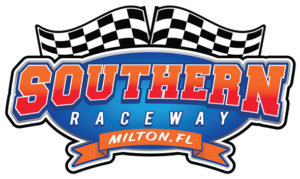 Patience proved to be the right combination on  August 28 at Southern Raceway for the new Pure Stock points leader Jessica Donaldson.
Donaldson kept clear off the eight issues to bring out caution flags to win the Pure Stock feature, while Carl Dodson found himself in the pits after being caught up in a mishap on lap five.
Entering the night Donaldson and Dodson were tied for the points lead until the heat races. Dodson took a short lived lead in the standings as he finished one spot of Donaldson in their heat race.
In the feature there was car parts and pieces everywhere as the 20 lap feature had to be shortened to 12 laps due to the race exceeding its 30 minute time limit.
Bubba Fletcher took the early lead on lap two and held it until lap 10 when he and William Arnett spun coming off of turn four while racing back to the caution.
With a huge roar of approval Donaldson took the lead and held on as a spin by Devin Lenior set up a one lap race to the finish.
Donaldson had no trouble holding off Adam Ellison who finished a close second. Rounding out the top five were Wayne Plunkett, Jacob Myers, and Christopher Brown in that order.
John Cody showed why Saturday night he leads the 2016 Vintage standings.
Cody took the lead at the drop of the green flag and held off the 2015 Vintage champion James Ward for the win.
Rounding out the top five were Aleck Alford in third followed by Justin Scott and Mike Neihaus.
After the Vintage feature the top six finishers took to the track for a six pack shootout.
Ward won the six lap bonus race without any trouble as Cody’s car had to be pushed off the track prior to the start of the race.
The NeSmith Street Stock offered race fans plenty of action on the night with eight cautions, but all of them occurred behind the car of Stuart Wilson.
Wilson led wire to wire for the win.
Most of the cars racing behind him were not as fortunate.
Kevin Mitchell, who was involved in a spin on lap 10, recovered to finish second followed by Bo Bailey, Justin Hamilton, and Justin Abel to round out the top five.
In the Bay Area Modified feature Jason Barnhill took the lead on lap two and never looked back.
Barnhill took advantage of Eli Williams’ misfortune as he spun on lap two while trying to cut the corner too tight.
Kyle Rutowski challenged Barnhill for the win a couple of times before finishing second by Chris Singleton, Josh Goodwin and Jason Messick rounding out the top five.
In a special hot dog race at intermission the winners were Bo Bailey in the Street Stock and Eddie Rose in the Pure Stock.
A big night of racing action is planned for this Labor Day Weekend on the three-eighths mile dirt.
There will be racing action on Saturday and Sunday featuring the Sprint Cars on both days along with racing action in our regular series as well. Fans during the weekend will be offered an autograph session with the sprint car drivers and so much more.
A two-day pass for Labor Day weekend is $25
Gates open at 4:30 p.m. Saturday and 3:30 p.m on Sunday. Racing action Saturday will get underway at 7:30 p.m. and at 6:30 p.m. on Sunday.
For more information about Southern Raceway you can check the track out on Facebook or look them up online at www.southernraceway.com.