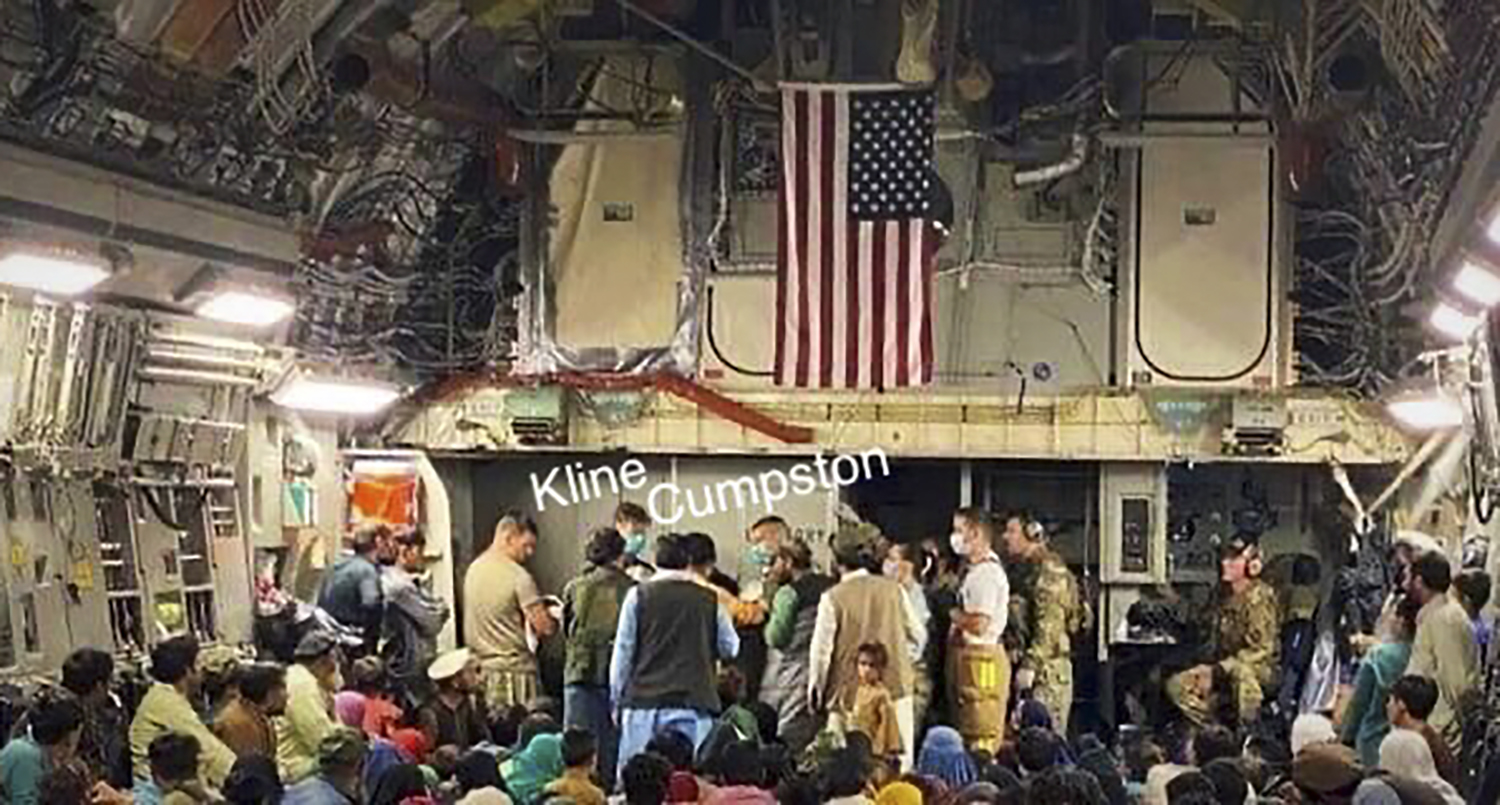 When Tech. Sgt. Travis Cumpston approached the unconscious 5-year-old girl, he said his first thought was she reminded him of his own daughter.

The deployed 96th Test Wing firefighter, on board a just-arrived C-17 full of Afghanistan refugees, tried to revive the girl as her panicked mother watched behind him.  With no response, Cumpston picked her up and carried her to get further help as he said he would if she was his own.

This was just one of the many moments and interactions 12 Eglin firefighters experienced at Al Udeid Air Base, Qatar, during the Operation Allies Refuge Aug. 15 through Sept. 1.

Many of Eglin’s Airmen firefighters responded to the first aircraft emergency call in the morning hours of Aug. 15.

“I had no idea what to expect on my way to the flight line, until I saw it,” said Cumpston, of what was about to happen over the next 15 days.  “There’s just no way any of us did.”

When they arrived, they saw more than 800 Afghanistan men, women and children exiting the aircraft.  This was the first plane from Afghanistan to arrive at the base.  The Afghan government was falling into the hands of the Taliban and United States forces began the evacuation effort known as OAR.

“The next few weeks were a steady blur,” said Senior Airman Jarod Mauldin, 26, from Mesa Arizona of the non-stop emergency response effort.  “There were so many evacuees showing up per hour we couldn’t keep up and had to constantly change tactics to try to make sure we could at least help.”

That initial flight would lead to more than 250 aircraft arrivals, all in some sort of emergency status involving the evacuees within.  The C-17s and other aircraft landed and stacked up continuously around the clock.

“You are told many more C-17s could arrive any minute and told to expect medical emergencies,” said Cumpston, 38, from Bloomington, Illinois.  “You take whatever medical equipment you can.  You just fill your pockets and hope it will be enough.  While you’re preparing, there’s an emergency.  Then, before you’ve responded to the first, there’s a second emergency call.  Then, there’s a third call and seconds later, a fourth emergency call.”

Once the firefighters responded on the scene, they waded through the sea of around 500 Afghan refugees on the plane to begin communicating with the aircrew.

During those briefs, which were shouted due to the volume of passengers and aircraft, Cumpston learned of the wide array of situations he would to face.  They ranged from heat exhaustion and stroke to dehydration, wounds, trauma, diabetics with no insulin, unconsciousness and women in labor.

“We went to work and got it done, one after the other,” said Cumpston, serving on his fifth deployment.

The fire department leadership established a large-scale emergency response, similar to what would occur if there was a base mass casualty event.  Rapid triage, treatment and transport vehicles, or RT3s, were deployed to quickly respond to the emergencies and take control of the situation.  These trucks were equipped with medical supplies, food, water and ice packs.

The two-Airmen RT3 teams on the vehicles would enter the aircraft, perform any immediate triage and move priority patients to aid stations.  With so many evacuees aboard, the firefighters could not bring in stretchers to transport the injured.  The Airmen would individually carry many of them out of the aircraft, down stairs and into a transport vehicle.  Once at the medical aid station, they carried them again to a bed.  The Airmen performed these tasks wearing protective gear in temperatures averaging 120 degrees.

During those 15 hot August days, the fire department Airmen aided more than 7,500 patients, including more than 40 trauma victims, and they helped deliver seven babies.

Cumpston and Staff Sgt. Hunter Kline, also a 96th TW firefighter, helped deliver one of those babies on board one of the C-17s.  After Baby Naseerah, meaning helper, was born, Cumpston waited with the father as Air Force doctors tended to the mother and newborn.

Cumpston recalled seeing the father crying tears of joy not just for the birth of his daughter, but for his entire family’s survival and escape from their country.

For all the successes and saves the firefighters helped in, they also bore witness to the uncertain circumstances the Afghanistan evacuees fled from.

Cumpston recalled using water bottles to wash dried blood off a 9-year-old boy’s face, only to discover it wasn’t his blood.  He lost his parents, and another family had taken him in during the evacuation process.

“Seeing thousands of people and then finding that little boy, my mindset completely changed,” said Cumpton, who initially downplayed the size and severity of the situation in his mind.

“This was not going to be a small thing,” he said.  “I was upset by it.  He did not deserve what happened to him.  After that, I was dialed in and more focused.  It was personal at that point.”

All of the firefighters said they marveled at the resiliency of the people they encountered and helped.

“I remember children running up to us and fist bumping us,” said Mauldin.  “These kids just went through hell most Americans couldn’t imagine, but they were still there smiling, having fun, and loving every time a firefighter walked through their area.”

For the firefighters, those smiles and moments were the motivators to keep going with little to no sleep for those 15 days.  Even while not on duty, the Airmen helped build more than 1,000 cots and deliver approximately 3,000 pounds of essential items to the evacuees.

“Every single firefighter worked themself to death,” said Mauldin.  “Then got off shift and volunteered to go help some more.  We were already a strong force, but once things got rough, we held on stronger and fought harder together.”

In the midst of those long hours of effort, the firefighters took time to pass out hundreds of plastic fire helmets to as many kids as they could find.

“It was awesome seeing all these kids in little fire helmets,” said Cumpston, a 17-year veteran.  “It was important to us they knew they were safe and they were welcome.”

At the beginning of OAR, it was not all smiles and fist-bumps.  There were many unknowns and concerns, particularly security.

To provide some sense of safety and security, pararescue Airmen were incorporated into the RT3 teams.

With a sense of security taken care of, the firefighters said they leaned heavily on their constant training and real-world experience as they faced each new task or emergency.

“Training is obviously a necessity, but I think having experience running calls and doing medical intervention was the savior in this situation,” said Mauldin, an RT3 vehicle driver during the operation.

About two months after OAR, they reflected on their efforts.  They said they were proud of the work they did.  Even with their stress levels pushed to the brink and so many at the point of exhaustion by the end, no one stopped or complained ever.

There were more than 57,000 evacuees, Americans and others airlifted to Al Udeid during OAR.  Of the 7,500 people the firefighters helped, no lives were lost in the effort.

“The sheer magnitude of what they accomplished is astounding” said Maj. Brandon Goebel, 96th Civil Engineer Squadron commander, after hearing his Airmen’s stories and seeing the amount of aid they provided.  “In many cases, our firefighters were the first Americans to contact and care for the Afghan evacuees.  I cannot think of more patriotic an act and the very definition of what it means to be an Airman.”

Hidden within those aid numbers are the small moments of connection Eglin’s firefighters found with Afghan people.  Moments like the one Cumpston shared with that 5-year-old girl.

Cumpston lay the still-unconscious little girl down on a hospital bed.

“It was hard to leave her,” he said.  “I wanted to make sure she had everything she needed, and I wanted to stay.”

He left her with a nurse and returned to the same plane he picked her up at to help others.

Later, Cumpston said he checked in on her.  She received fluids via an IV and was alert and doing much better.  When he approached her, she reached out and gave him a hug.

The deployed 96th TW firefighters who participated in the OAR effort are: