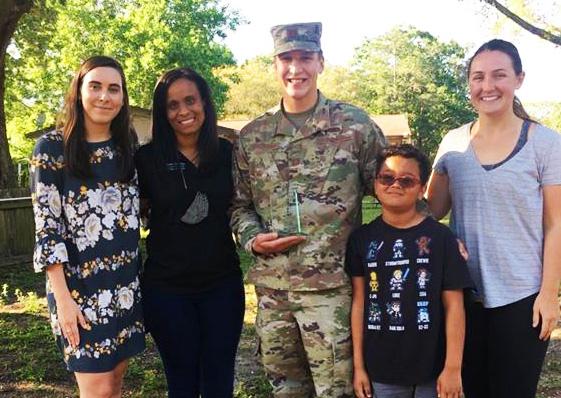 Big Brothers Big Sisters of Northwest Florida (BBBSNWFL) names United States Air Force Personnel Flight Commander, Alan Erickson, as the 2021 Ron Mobayed Military Big of the Year.
The Ron Mobayed Award was established as a memorial to the life of Lt. Ronald Joseph Mobayed, who was an outstanding Big Brother while he was stationed in Pensacola for flight training in the early 1990s. Tragically, Ron and his crew were killed in the line of duty on October 3, 1995. This award is presented to pay tribute to our military volunteers in honor of Ron’s love and dedication to the military armed forces and is awarded to a Big, like Alan, who exemplifies the spirit of Ron through their commitment to their Little, to the Big Brothers Big Sisters agency, and to the children of their community.
Alan was surprised at his home when his Little, Micah, and BBBSNWFL staff visited him to present the award.
“I am honored to receive the Ron Mobayed Military Big of the Year award and would like to give significant credit to my wife, Sarah since we are a duo match with Micah,” says Alan. “While I was deployed, she met with Micah each week and always had engaging fun activities planned. [BBBSNWFL] is a fantastic organization that makes significant differences in the lives of both Littles and Bigs. Over the past two years, Micah has taught me the importance of listening and allowing for some silence before interjecting. A little patience has led to great conversation and development for all of us.”
Alan and his wife, Sarah, first considered fostering a child but felt like being mentors would be a great fit for them. When Alan started the process of being a Big Brother, he became eager to be a positive role model and be there for a Little in need.
In March 2019, Alan and his wife, Sarah, became a Big Duo to Little Brother, Micah. Over the past two years, Alan has been committed to fostering, developing, and helping his Little Brother, Micah, to grow and achieve his true potential.
When speaking with Micah’s guardian about Alan, she described him as a consistent, important, and significant person in Micah’s life. Alan has inspired, helped, and has been a positive influence on Micah.
Alan is currently stationed at Eglin Air Force Base where he has been for almost three years. Since Alan has been in Florida, he has served as a deputy for the Support, Advocacy & Resource Center (SARC): a resource for people going through challenging times. Alan is called to serve in many ways throughout the Fort Walton Beach community.
BBBSNWFL thanks Alan for all that he has done for his Little and for the United States. They are happy to have him as an influential mentor in the program. To learn more about how you can get involved, visit www.bbbsnwfl.org/get-involved/.
###