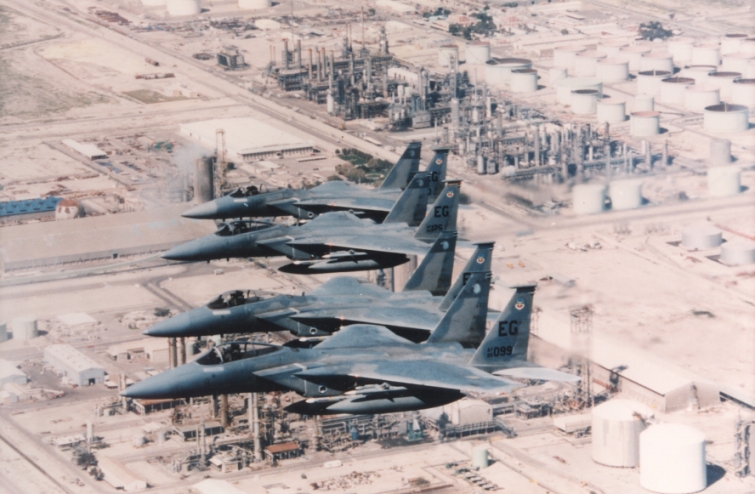 In this historic photo, a four-ship of F-15C Eagles, deployed from Eglin Air Force Base, fly over the Persian Gulf in the 1990s.

By the end of the month, the Nomads were on their way to King Faisal Air Base, Saudi Arabia with 769 personnel and 24 F-15Cs. This was the 33rd Tactical Fighter Wing (Provisional), a mini-version of the main 33rd TFW back in Florida. Commanded by Col. Rick N. Parsons, the 33rd TFW (P) recorded nearly 5,000 flight hours in over 1,700 training sorties in just four months.

In the three weeks since the start of Operation Desert Storm, the 33rd TFW (P) scored a total of 16 combat kills, the most of any allied unit. The Nomads also had the greatest number of pilots in one squadron with aerial victories (12), most pilots with multiple victories (4), and the only wing commander to record an aerial victory.

Beyond the achievements of the pilots, the success of the 33rd TFW (P) during Desert Storm relied on the hundreds of maintenance and support personnel who worked to ensure the planes and pilots were ready to fly. Mission capable rates averaged 95.6 percent during the first two weeks of the war, far above the Tactical Air Command standard of 83 percent. The total non-mission capable maintenance rate was .3 percent, well below the TAC standard of 12 percent.

Lt. Col. William Thiel, 58th Tactical Fighter Squadron commander, laid out the objectives before deploying: gain and maintain air superiority; kill ratio of XX to 0; no lost sorties due to operational or maintenance shortfalls. The 33rd TFW (P) achieved them all.

Operation Desert Storm’s 38-day air campaign ended on Feb. 23, 1991, and the famous “100-hour” ground campaign began the next day. Saddam Hussain ordered the withdrawal of all Iraqi forces from Kuwait and the war ended on Feb. 28. The conflict was the most decisive use of air power yet seen in American history, and the 33rd TFW (P) returned to Eglin Air Force Base on April 12, 1991.