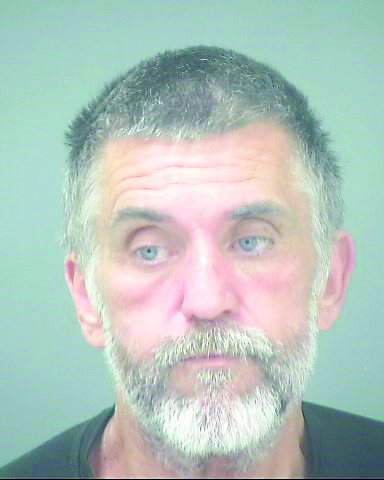 Like father, like son.
For the second time this year, a Navarre father and son have been arrested for Dealing in Stolen Property and Larceny after they were allegedly caught trying to casually steal items from a Navarre residence on Monday.
Marvan Darby, 53, and his 20-year-old son, Marvin, both of the 2400 block of Andorra Street were arrested on Monday by Santa Rosa County Sheriff’s deputies and charged with Burglary, Larceny, Resisting an Officer and Dealing in Stolen Property. They remain behind bars at Santa Rosa County Jail as of press time. Marvan was given a $35,500 bond during his first appearance and his son was handed a $50,500 bond during his first appearance.
According to the SRSO arrest report, a deputy was called out to the corner of Segura Street and Avenida de Sol Monday at around 6:30 p.m. in reference to a burglary.
The victim told law enforcement that he was at his home that day when he observed an older white male, later identified as Marvan, walking down his driveway with his lawnmower that the suspect had allegedly stolen from his garage.

The victim told the officer that he also observed another man, later identified as Marvin, across the street from his home with his weed eater that had been allegedly taken from his garage as well.

The victim said that’s when he got into his vehicle and began to follow the two suspects as they walked west down Segura Street. The victim said that when he got close to the suspects with the lawn equipment, they became spooked and dropped the items and ran through an empty lot and away from the man.
The deputy immediately started searching for the father-son duo after taking the victim’s statement and eventually found the two walking down Avenida de Sol. Their clothing matched the victim’s description. According to the report, when Marvin saw the deputy’s cruiser, he bolted into a nearby wooded lot.
When the deputy got out of the vehicle to apprehend Marvan, he asked if the man that ran was his son. Marvan admitted to the deputy that it was.
The deputy commanded Marvan to stay put as he went after his son. Eventually the deputy caught up with Marvin who put his hands in the air and stated that he “would not run anymore”. When the deputy returned to his cruiser, the report indicated that Marvan had left the scene, despite the deputy’s previous commands.

Eventually other deputies were called to the scene and found Marvan only one street over and immediately took him into custody.
While being questioned, Marvan alleged that his son called him that day and told him that he had a lawnmower and a weed eater that he “needed help moving”. Marvan denied that he ever took anything out of the victim’s garage. He told deputies that when he saw the victim’s vehicle following him, he thought it looked suspicious and feared someone was going to “jump them”.
Marvin refused to speak with deputies and asked for a lawyer.
According to Santa Rosa County Jail View records, Marvan has been arrested 7 times since 2013. In the last 13 months alone, Marvan has been charged with Larceny 3 times.
Marvin has been arrested 5 times since 2014, and was arrested only two months ago for Dealing in Stolen Property, along with his father, on the same day. Marvin was also charged with Burglary and Larceny in January.