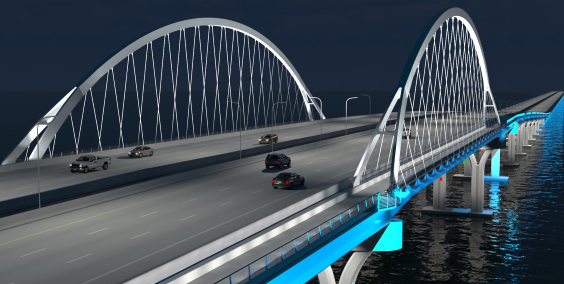 The Florida Department of Transportation during an 11 a.m. press conference in Pensacola confirmed “thousands” of cracks were found in the Pensacola Bay Bridge replacement project, which is currently unused and under construction.

Eisman & Russo Construction Engineering Inspection Program Director Brett Pielstick during the conference said up to 1,300 cracks, roughly half of an inch deep, were discovered in one concrete span during inspections.

Pielstick went on to say that cracks are “very common” in large projects and that the cracks discovered in nine of the new spans are not structural but rather “superficial.”

According to Pielstick, cracks can be caused by various factors, including weather conditions during construction.

Work was halted on bridge deck concrete placements from April 5 – 16 and again June 26- 27. All other construction operations for the project continued as normal during these periods, stated Tanya Branton, an FDOT Public Information Specialist.

“After identifying cracking in the newly placed concrete, the contractor’s work was suspended while the concrete placement operation was evaluated to determine the cause of cracking. As a result of this evaluation, the contractor modified their concrete materials and placement methods in an effort to improve the quality of the concrete bridge decks,” said Branton. “The contractor, in conjunction with their materials suppliers and engineering team, revised their concrete placement means and methods and presented to the Department a plan to alleviate the factors contributing to the cracking.”

Moving forward, there isn’t presently a plan to remedy the issue.

“There hasn’t been a decision made on how to fix the cracks at this point,” Branton told South Santa Rosa News. “They are still working on that.”

FDOT recently announced that the Pensacola Bay Bridge replacement project had reached a construction milestone during the week of July 2 when crews drove the final concrete piling for the new eastbound (Pensacola to Gulf Breeze) bridge.

The announcement stated the 1,062 piles for the eastbound bridge range in length from 120 to 210 feet and weigh as much as 190,000 pounds and that crews have driven the piles to depths averaging 80 to 100 feet into the bay floor.

Additionally, more than one-third of the piles needed for the new westbound (Gulf Breeze to Pensacola) bridge have been driven. Plans are to complete the new eastbound structure early next year and temporarily configure it for four travel lanes, separated by an auxiliary lane for emergency vehicles. Crews will then demolish the current bridge and complete the new westbound structure, stated FDOT in the announcement.

The pilings and other concrete components for the new bridge are fabricated at a casting yard on Bayou Chico and transported to the construction site by barge.  “All construction activities are weather dependent and may be delayed or rescheduled in the event of inclement weather,” stated the announcement.

Branton said the contractor’s current work schedule shows they are on track to achieve a $15 million bonus for shifting traffic to the new eastbound bridge.