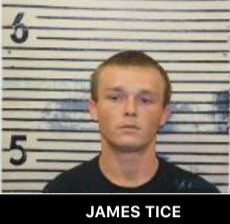 The Florida Highway Patrol last night announced that James Taylor Tice was arrested April 24 via FHP warrants, stemming from his alleged involvement in a hit and run crash in March 2018.

According to the press release, Tice was travelling north on Pine Forest Road, approaching the intersection to US 90 (9 Mile Road). The victim was stopped in the northbound lanes of Pine Forest Road for a red traffic signaling device. Tice failed to stop for the red light, causing the front of his vehicle to collide with the rear of the motorcycle driven by the victim. Tice then fled the scene and failed to render aid to the downed motorcyclist. A second motorcycle rider was able to follow the suspect vehicle driven by Tice. The witness was able to obtain a tag number for the vehicle involved in the crash. Tice was identified through an extensive investigation that resulted in a warrant being issued for his arrest based on his involvement regarding the hit and run crash. The victim suffered serious injuries from the crash.