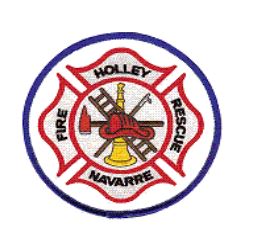 Firefighters were able to rescue a toddler, but friends say the boy’s grandmother perished in a residential house fire yesterday in East Navarre.

At 10:43 a.m. the Holley-Navarre Fire District was alerted for a residential structure fire in the 2200 block of Jeannie St. The dispatch center advised they
had received a 911 call from a neighbor one street over, reporting smoke coming from a house on Jeannie Street.

While gearing up at the front door, the Captain from Engine 45 heard crying coming from inside the home. Therefore, he immediately made entry and successfully located and rescued a 15-month-old male from the home. The child was located in a playpen just inside the front door of the smoke-filled home.

The child was transferred to Lifeguard EMS and transported to Sacred Heart Hospital. According to EMS reports, he had suffered burns over 30% of the body and was to be transferred to Shands Hospital in Gainesville for further treatment.

With the blaze beaten back and under control and interior visibility improving, crews were able to locate an adult female in the hallway near the back bedroom, unfortunately she was deceased.

The Florida State Fire Marshal’s Office is investigating the cause of the fire.

The Medical Examiners Office along with the Santa Rosa County Sheriffs Office are also conducting investigations of the tragic loss of life. No other injuries were reported.