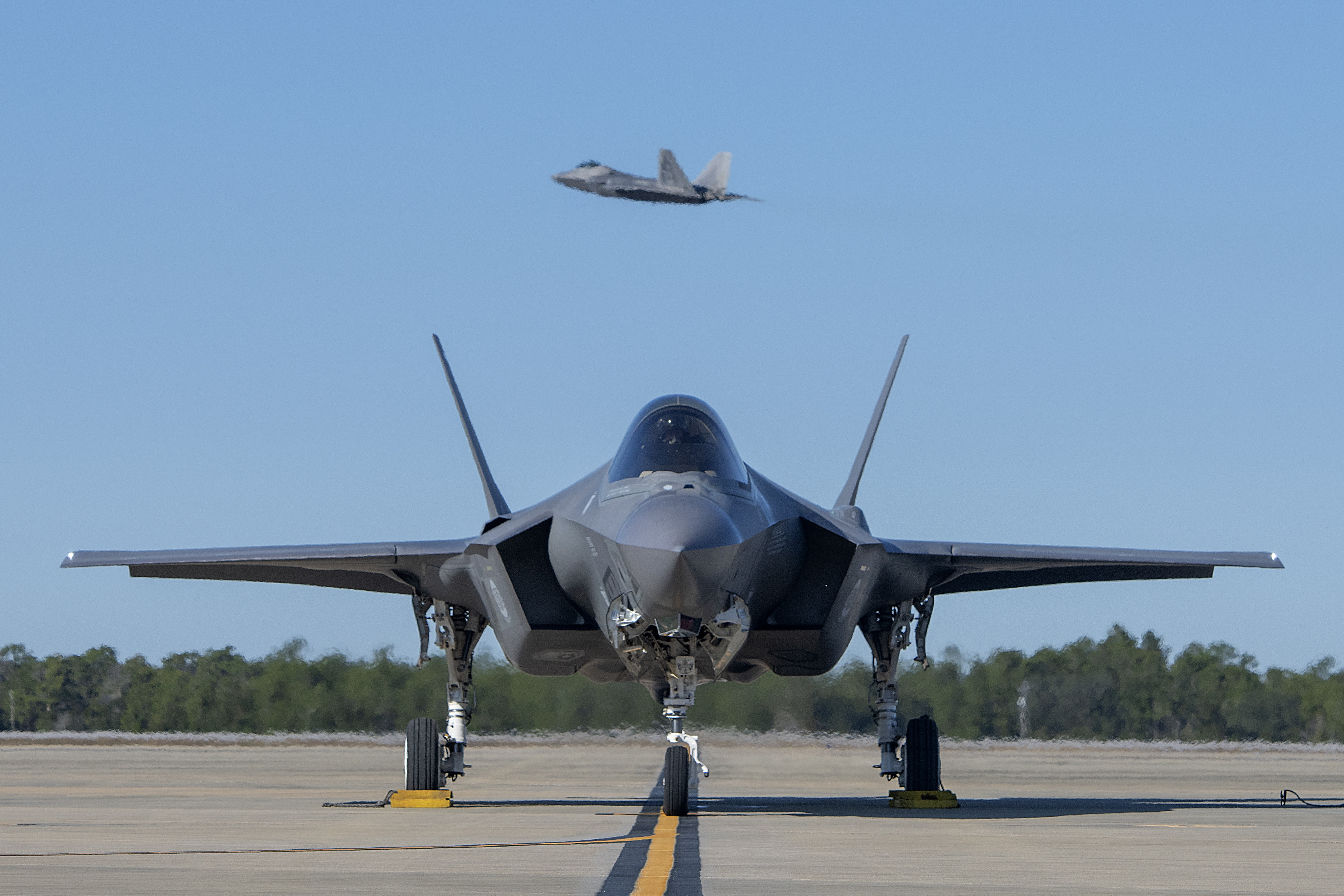 An F-35A Lightning II assigned to the 58th Fighter Squadron awaits permission to taxi as an F-22 Raptor assigned to the 27th Fighter Squadron takes off in the background, Dec. 4, 2018, at Eglin Air Force Base, Florida. Together, F-22s and F-35s successfully flew over 140 sorties and fired 13 missiles to culminate the first post-Hurricane Michael Combat Archer air-to-air exercise. (U.S. Air Force photo by Staff Sgt. Peter Thompson)

“This is the final step of our combat readiness – we assess our operations and maintenance personnel as well as the aircraft itself,” said Lt. Col. Marcus McGinn, 27th Fighter Squadron commander. “We need to make sure we have the ability to load missiles, the aircraft are configured correctly, the aircraft perform as they should when you press the pickle button, the missile performs as advertised, and the pilots know what to expect. All of these aspects must be tested and proven prior to actually needing the process to work in combat.

The 27th FS brought 200 personnel from Joint Base Langley-Eustis, Virginia, to participate in this Combat Archer, which was flown here due to the rebuilding efforts at Tyndall Air Force Base.

“The amount of coordination that goes into a single missile shoot cannot be quantified. The ability for the 83rd Fighter Weapons Squadron to accomplish this coordination across two different locations (Eglin and Tyndall), with the infrastructure limitations that Tyndall currently has, was unbelievable,” said McGinn.

This was the second Combat Archer the 27th Fighter Squadron has participated in this year. Of the 30 F-22 pilots, six were first time shooters.

“While this was the first time I fired a live missile, I wasn’t nervous,” said 1st Lt. Jake Wong, 27th Fighter Squadron F-22 pilot. “There is the seriousness that I have a live missile on my jet today, which is not something we do every day. The training is really good and the flight profile is controlled so we know what to expect to ensure we fire the missile safely.”

“No other Air Force in the world comes close to the same scale of weapons testing as the U.S. Air Force,” said Lt. Col. Ryan Serrill, 82nd ATRS commander. “We recognize the importance of this data to continually improve our warfighters ability which is why it was important to resume the Combat Archer mission so soon after the hurricane.”

Combat Archer is a 53rd Wing program managed by the 53rd Weapons Evaluation Group at Tyndall.  The 53rd WEG is a geographically separated unit of the 53rd Wing headquartered here.