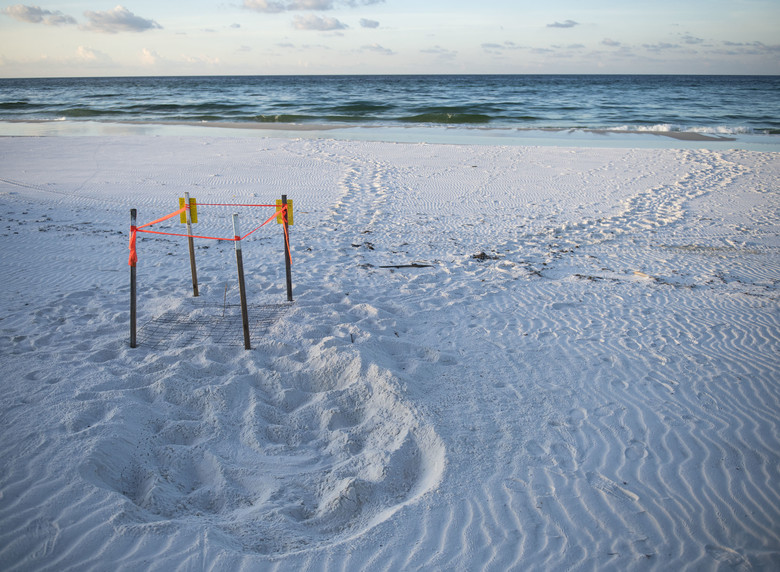 Alone in the dark, she crawls her way on shore and begins to dig into the sand. She digs a chamber and begins to drop eggs, two and three at a time. To camouflage her eggs, she throws sand with her flippers, then back into the sea, this scene occurs here annually by various species of sea turtles.

Nests from four threatened or endangered sea turtle species were discovered this year on the Eglin reservation.

“This is the first time in 30 years we have documented four species nesting in the same year,” said Kathy Gault, an Eglin biologist of the rare phenomenon.

The Kemp’s ridley and leatherback sea turtle nests are the rarest. There are also three greens and 17 loggerhead turtle nests as well.

Species increasing in numbers and the cyclical nesting pattern of the sea turtles contributed to the unique occasion.

“We usually only get a single Kemp’s ridley nest and not every year,” she said. “Leatherbacks are more common, but few of them nest in the Gulf of Mexico.”

More than 48 clutches of eggs are lain on Eglin property per year.

Female sea turtles nest every summer between May 1st and August 31st.  Each female lays three to five clutches of eggs. The warm sand incubates the eggs for 50 to 80 days. There are approximately 100 eggs per clutch. Moonlight helps guide the hatchlings to the ocean when they emerge according to Gault.

The volunteers ride an ATV along Eglin’s 18 miles of beach to look for signs of sea turtle crawls. When a nest is found, the egg clutch is located to confirm there are eggs in the nest. Then, the nest is marked with “Sea Turtle” signs and screened to protect it from predators and human disturbance.

Eglin biologists submit photographs and/or genetic samples of the turtle nests to verify what species it is, with loggerheads as the exception. Florida Fish and Wildlife Conservation Commission compiles and analyzes the data to assess the viability of the sea turtles.

The daily surveys also provide biologists here with the exact location of each nest and allows them to estimate hatching dates.

“For military beaches, it is important to know this information due to mission activities,” said Erica Lee, a biologist here and volunteer coordinator. “We can provide additional measures to keep the nests safe during incubation.”

During night missions, biologists also survey the beach for nesting turtles. Occasionally, biologists relocate sea turtle nests if they are laid in the boundaries of a mission.

An average of 3,250 sea turtles hatchlings make it to the Gulf of Mexico from Eglin beaches each year.