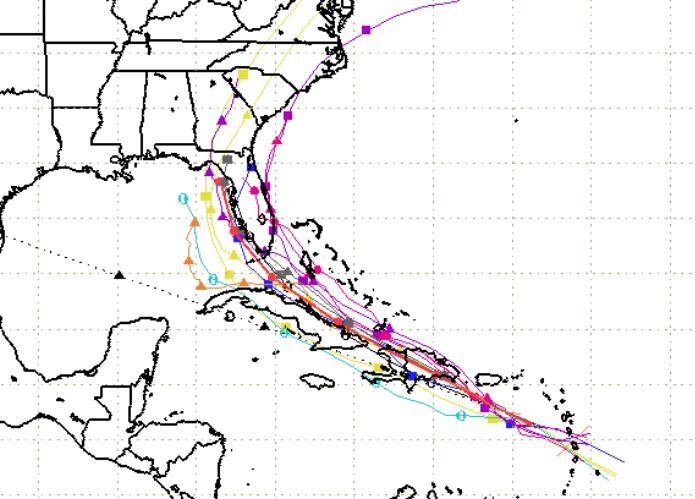 NHC Forecaster Dan Brown recommends Floridians monitor forecasts for changes to both the track and intensity, which he said are “likely.” He said the storm is still expected to become Tropical Storm Isaias later today. 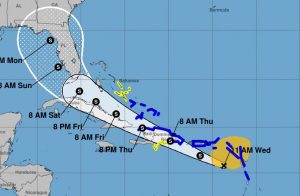 Currently the EURO computer model indicates the storm could bust up over the mountains of Hispaniola and remnants could enter the Gulf. However, models have not yet been updated with this morning’s NOAA hurricane hunter reconnaissance mission data.

“It still must be stressed that since the system lacks a well-defined center and remains in its formative stage, uncertainty in the specifics of the track forecast remain high in both the short and longer range. The latest NHC track foreast has been nudged slightly south of the previous advisory and lies between the latest ECMWF  (EURO model) solution and the various consensus aids,” said Brown.

At 11 AM AST (9 CST), the disturbance was centered near latitude 15.8 North, longitude 63.7 West. The system is moving toward the west-northwest near 23 mph, and this general motion with some reduction in forward speed is expected over the next few days. On the forecast track, the system will move near or over Puerto Rico
tonight, near or over Hispaniola on Thursday, and near or over the southeastern Bahamas on Friday.

Maximum sustained winds remain near 45 mph with higher gusts. Some increase in strength is forecast today, with weakening likely on Thursday due to land interaction, and some restrengthening possible late week.

Tropical-storm-force winds extend outward up to 275 miles primarily to the north and northeast of the center.

A Tropical Storm Warning is in effect for the following locations:

The storm is expected to being 4 to 8 inches, with isolated totals of 12 inches of rain across the Inagua Islands.  These rainfall amounts could lead to life threatening flash flooding and mudslides, as well as potential riverine flooding, per NHC.