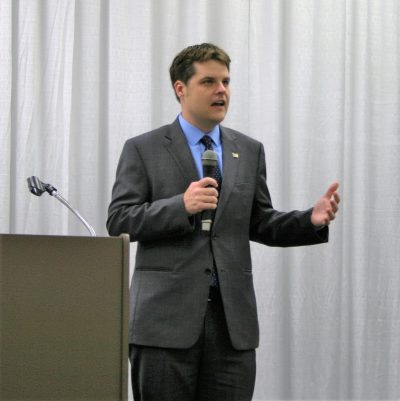 Congressman Matt Gaetz (FL-01) on Wednesday applauded the final passage of H.R. 205, “Protecting and Securing Florida’s Coastline Act of 2019,” which permanently extends the moratorium on drilling in areas of the Gulf of Mexico near the Florida coast, including the Gulf Test Range.

“Florida’s precious coastline is a national treasure and a vital military asset. Our military mission, environment, and property values cannot be subjected to the potentially disastrous repercussions caused by drilling in the Gulf of Mexico. It is incomprehensible that a drilling moratorium would not be imposed in an area where experimental missiles are tested and launched. I applaud the passage of today’s bill, which permanently extends the ban on drilling in key regions of the Gulf of Mexico including the Gulf Test Range, and I commit to further ensuring that no drilling occurs off Florida’s coast,” said Congressman Gaetz.

Congressman Matt Gaetz is a cosponsor of H.R. 205 and spoke in support of the bill on the House Floor earlier today.