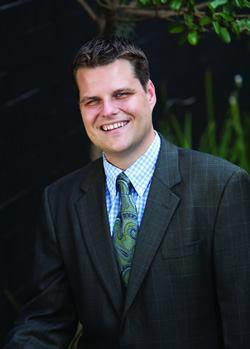 When U.S. Congressman Jeff Miller made the surprise announcement that he would not seek re-election after completing his current eighth term, it started a snowball of growing speculation about which local elected officials might seek his seat — and who might in turn try to fill any resulting vacancies.

Political powerhouse and Florida State Senator Don Gaetz sent out an email last Tuesday, stating he would not run for Congress. He also expressed confidence that a “real, true conservative will become a candidate.”

Many seemed to believe that candidate would be Gaetz’s son, Florida House District 4 Representative Matt Gaetz, who is currently a candidate for his father’s senate seat.

That came to fruition this morning when the younger Gaetz announced his candidacy for the office, joining Republicans Cris Dosev, Mark Wichern and Brian Frazier and Democrat Amanda Leigh Kondrat’yev.
Current Escambia County Supervisor of Elections David Stafford and former Escambia County Commissioner Gene Valentino along with Pensacola Mayor Ashton Hayward are also having their names thrown around as potential candidates, too.
However, it is widely anticipated that Senator Greg Evers, whose name has been mentioned in several races, including the 2016 Santa Rosa County Sheriff and 2018 Florida Commissioner of Agriculture races, will seek Miller’s seat.

Some suspect Evers would like to unleash his passion for supporting the Second Amendment on Washington, D.C. But so far he isn’t confirming or denying any rumors — although three Florida legislators seem hopeful he will make that move.

Broxson’s longtime legislative assistant, Kevin Brown, owns property in District 3 but hasn’t yet confirmed or denied he plans to run.

Political pundits think Gaetz will back Ingram and vice versa and Evers will get support from and in turn support Broxson.

So Miller’s vacancy has definitely shaken up the local political landscape and enlivened this year’s election cycle.