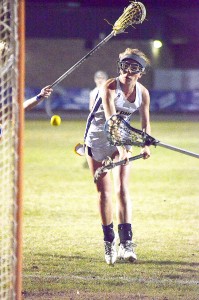 The Gulf Breeze High School Lady Dolphin lacrosse team increased their overall record to 6-1 after a 17-0 blowout over Columbus High School out of Georgia on March 4.
The team got things started early on when Avery Currington won the draw and began the Lady Dolphins initial attack. She got the ball back around the top of the box and drove in for a shot on goal, scoring her first of four goals on the night to put her team up 1-0 in the first minute of play.
Frances Williams received an 8-meter shot after a shooting space call against Columbus with 20:45 remaining in the first half and put a textbook bounce shot between the legs of the goalkeeper to make it 2-0. Another 8-meter shot four minutes later would give Williams her second goal of the night and take the game out of sight for Columbus, bringing the score to 5-0.
KateReagan Costello caused a last minute turnover at the end of the second half, feeding the ball to Williams, who juked a defender and calmly finished the shot to put her team up 11-0 at halftime. The Lady Dolphins did well to hold possession on the opposing half of the field during the match, limiting the Lady Blue Devils to two chances in the first half which were easily dealt with by the defense.
The second half brought little changes, although Columbus did much better at their man-to-man coverage to limit the offensive onslaught from Gulf Breeze, limiting them to only seven more goals. Three Lady Dolphin players picked up hat tricks on the night; Williams finished the match with five goals for her side, Currington had four and Thompson with three. Kaytlyn Carlson and Shelby Dunne added two more goals apiece while Kendall Sheffler put the final nail in the coffin with a single shot in the last few minutes of play. 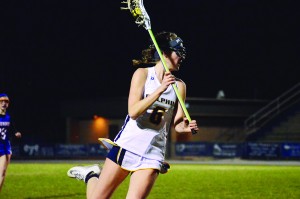