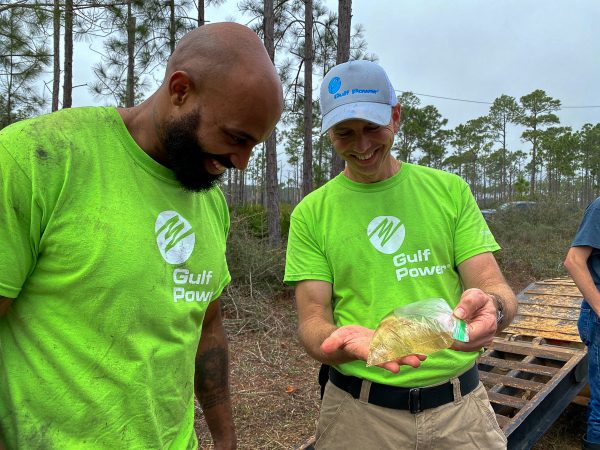 R.J. Chambers, corporate real estate representative, and Jeff Cole, stewardship coordinator, inspect a reticulated flatwood salamander tadpole. It was captured by a biologist to show the volunteers what they working so hard to save, and then quickly returned to its breeding pond (photo courtesy Gulf Power).

Nestled in a longleaf pine forest in Okaloosa County is one of the few remaining breeding ponds in the region for the rare flatwood reticulated salamander. The endangered species is in rapid decline and plays a big role in the longleaf pine ecosystem.

Recently, Gulf Power employees joined a team of more than 50 volunteers, conservationists and resources managers to help Eglin Air Force Base Natural Resources Branch and Florida Fish and Wildlife Conservation Commission restore the delicate habitat of the small creature that most people will never see in their lifetime.

The work involved hauling tree limbs and small trunks of young pine trees cut down by an FWC forestry group because they were overtaking the wetlands surrounding the pond. This overgrowth causes the natural habitat, historically kept in check by natural fires, to decline and makes it difficult for the salamander to breed successfully, explained Kelly Jones, a Virginia Tech Institute biologist working with Eglin and FWC on increasing the salamander’s population.

“What we’re all doing here today is opening the canopy and letting more sunlight hit the ground and a healthy ground cover should return in a few years,” he said. “The ground cover will suck up a lot less water than the trees so the water-holding capacity of the breeding wetlands should do better.”

Prescribed burns conducted when the salamander is underground, outside the breeding season, will support the habitat restoration, he noted. The goal is to increase the population so it expands.

Jeff Cole, Gulf Power’s stewardship coordinator, said the No. 1 question people ask is “Why do we need to save this salamander?”

“It’s the bottom of the food chain, and when it’s gone, then it impacts the next animal in line and the next until the great blue herons and other animals that people like and care about start disappearing,” Cole said. “You’ve got to protect the food chain.”

In fact, protecting the salamander and enhancing its habitat also benefits hundreds of other plant and animal species that are important to a healthy longleaf pine, flatwoods system.

Moreover, Mike Spaits, Eglin’s public affairs officer, said partnerships with agencies and corporate volunteer groups like Gulf Power are key to helping the base with its environmental mission. Boosting populations of endangered species on its vast preserve, in turn, can lead to fewer imposed restrictions on training and other base operations.

“We’re limited in the resources we have, and the assistance we get from Gulf Power is invaluable,” he said.

R.J. Chambers, a corporate real estate representative who works in the Corporate Office, was among nine Gulf Power volunteers. He said he enjoyed learning about the salamander as much as he enjoyed getting out in the great outdoors to do some hard work.

“It was definitely pretty cool to learn about something new today,” he said. “This workday also provided me the opportunity to go out and connect with different workgroups within the company, like the environmental group. And, this area we were working in is the territory I work.”

Alea Williams, a business analyst for external relations, said she enjoys participating in the stewardship workdays and working for a company that allows its employees the opportunity to volunteer for them.

“As hard as the work is, hauling lumber out and trying to protect this species is really important to me because I really do care for my environment,” she said. “I didn’t know anything about the salamander before. I just knew I was coming out to protect the little bitty salamander, and that makes me feel good.”