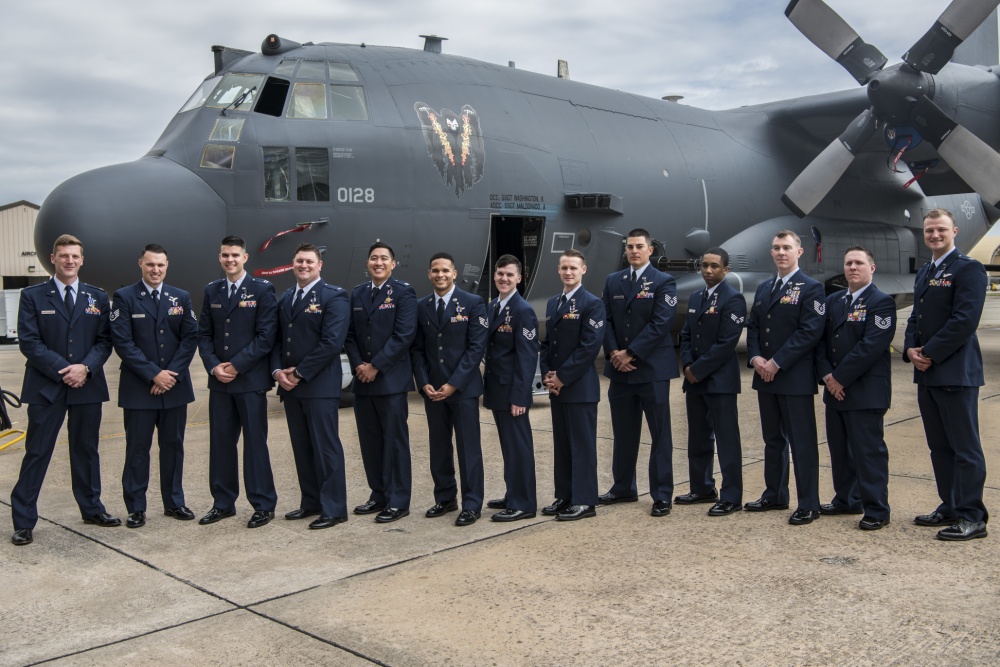 On the night of April 3-4, 2019, on a heavily-fortified mountainside near Nangarhar Province, Afghanistan, a group of joint American special operations and coalition forces found themselves taking fire as casualties mounted after an improvised explosive device attack.

In need of assistance, the Special Tactics operators on the ground called for an AC-130U “Spooky” Gunship, (Callsign Spooky 41) who arrived to suppress the enemy located in close proximity to the group.

As the gunship fired down on the enemy, at times less than 140 meters from the group, three medical-evacuation helicopters hovered more than an hour to safely rescue all 15 patients. The enemy was not able to get a single shot off at the MEDEVAC helicopters, due to the precise airpower strikes of Spooky 41’s aircrew.

The aircrew of Spooky 41 provided precision-strike support to Special Tactics operators for more than 9 hours, enabling the safe recovery of all 15 patients and supporting the clearance of an Islamic State of Iraq and Syria-Khorasan redoubt. The mission took place during Operation FREEDOM’S SENTINEL in support of the Resolute Support mission.

“There is nothing more complicated than the dance that goes on in a gunship to bring the kind of capability our teammates have described this morning to bear on our nation’s adversaries,” said Slife. “The orchestration that goes on is unlike anything you will see anyplace else in AFSOC or in the United States Air Force.”

The AC-130U’s capability to track and engage several targets simultaneously with different levels of ordnance is an invaluable asset to special operations forces on the ground. It offers a 105 mm howitzer cannon, 40 mm Bofors cannon and a 25 mm GAU-12 Gatling cannon.

Members of the joint special operations ground forces were in attendance at the ceremony and spoke to Spooky 41’s impact on their ability to suppress the enemy and safely extract the combat casualties.

“I have been nothing short of humbled by your commitment to your profession and your commitment to each other and though most will never hear your stories of service and sacrifice, I will always know what you did for my men and I will never forget it,” said U.S. Army Maj. Jared Tomberlin, Special Operations Forces team member. “When every second mattered and lives were on the line, everybody was on top of their game in that aircraft — 100 percent and then some.”

U.S. Army Capt. Benjamin Carnell, SOF team member and one of the casualties rescued by MEDEVAC, also echoed a sentiment of appreciation to the Spooky 41 crew.

“From the regiment, from the assault force, and more specifically from my wife and my son and my daughter — I want to thank you for your professionalism and for rising to the occasion” said Carnell. “Without any of that I would not have been hoisted out of there and I wouldn’t be standing here in front of you today, so I am indebted to you in a way that I can’t describe.”

The gunship has a storied history dating back to the Vietnam War, with the first variant, the AC-47 – a modified Douglas DC-3 mounted with three 7.62 mm miniguns — was credited with destroying more than 10,000 trucks and many life-saving close air support missions.

The 3rd generation AC-130U Spooky Gunship is slated for retirement as the next variant, the AC-130J “Ghostrider” Gunship, takes over their mission.

“This is probably the last ceremony of this sort we will do for any AC-130U crew before the last aircraft departs Hurlburt Field later this year,” said Slife.

The DFC is awarded to any officer or enlisted person of the U.S. Armed Forces who have distinguished themselves in actual combat in support of operations by heroism or extraordinary achievement while participating in an aerial flight.

Air Medals are awarded to U.S. and civilian personnel for single acts of heroism or meritorious achievements while participating in aerial flight and foreign military personnel in actual combat in support of operations.

The “C” device was established to distinguish an award earned for exceptionally meritorious service or achievement performed under combat conditions.