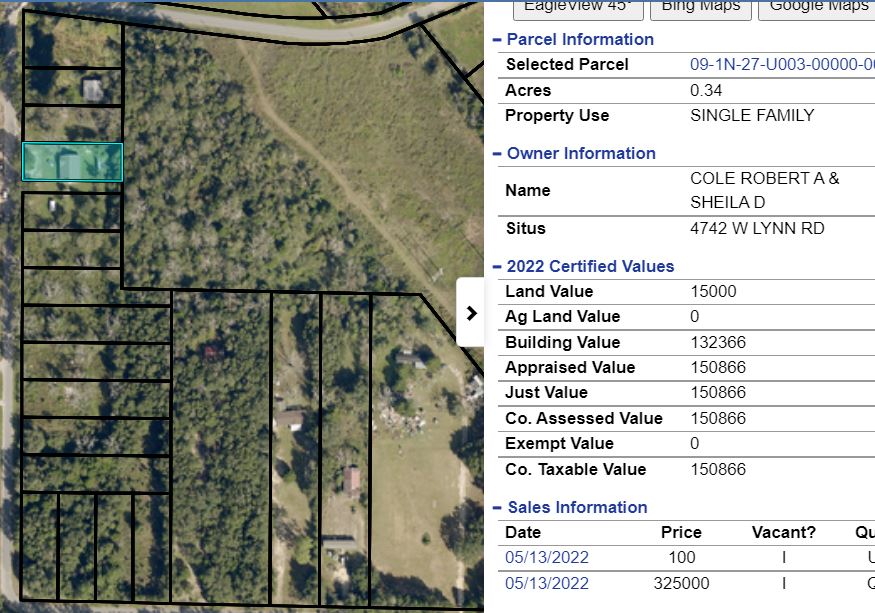 During last night’s Santa Rosa County rezoning meeting District 2 Commissioner Bob Cole engaged in a phone call while the meeting’s broadcast was live. Cole was overheard discussing three rezoning requests in his district and making an allegation that hush money was paid in connection to one of them.

“We got ours passed, and Sam got his passed,” Cole stated to an unidentified male on the call, which took place during a brief recess in the meeting, which Cole was attending remotely.

Cole was referring to the following two requests for which the county’s appointed zoning board previously recommended denial:

Both rezoning requests were approved by the Board of County Commissioners with Cole and Parker abstaining from the requests for the respective properties to which they were connected, per James Calkins, who was acting chairman of the meeting.

During Cole’s conversation he also discussed a third rezoning request which had been submitted on behalf of developer Craig Kruse, who was seeking to change a roughly 22.7-acre parcel he owns at the intersection of Highway 87 S and Nichols Lake Road from agricultural to highway commercial development. That request was previously recommended for approval by the appointed zoning board ahead of being unanimously approved last night by county commissioners.

Cole and the unidentified male speculated during their conversation that Tony Hughes, who, with his wife, Mia, owns a horse farm on nearby Hickory Hammock Road, had been paid off in exchange for not opposing Kruse’s rezoning request.

Hughes, in an interview this afternoon with South Santa Rosa News, stated he was “surprised” to hear his name brought up in Cole’s conversation.

Hughes explained that he and his wife, back in August 2021, purchased more rural land in Laurel Hill, where they intend to eventually relocate their 8 horses. The couple’s decision to move came after their vocal opposition to a May 2021 rezoning request in which Kruse sought to change the zoning on land adjacent to their farm. Hughes says in October 2022 the couple sold a 1.5-acre parcel in the northeast corner of their farm to Kruse but that Cole’s allegation was “factually untrue” and that his silence cannot be bought, pointing out that last night’s rezoning request is on the other side of Highway 87 S and not adjacent to their farm.

A transcription of Cole’s conversation, which took place at the 4:26:58 mark during the rezoning meeting, follows:

COLE: Hey, did you watch the meeting?

MALE: I was gonna check on it later, but I kinda forgot about it.

COLE: And Kruse was no problem.

MALE: I didn’t, everybody that, even at the zoning thing, everybody there was like, the few people that got up, I figured it            was going to be like every other one, you know, people were gone get up and complain and all that, and nobody said a word. But that’s probably, like you, said Tony Hughes, he probably went and talked to them all because they’re all buddies and said “(Oh whoa, whoa) we’re not going to talk about this.”

COLE: Well he bought ‘em off. So I guess if you got that kind of money…

MALE Well I was telling Savannah about that because that just goes to show when he had all them signs up, talking about           how, you know, horses didn’t belong next to all this, he didn’t give two craps about that, he just wanted money.

To listen to the audio, visit the following link and fast forward to the 4:26:58 mark: CLICK HERE TO WATCH OCTOBER 27 SANTA ROSA COUNTY REZONING MEETNG