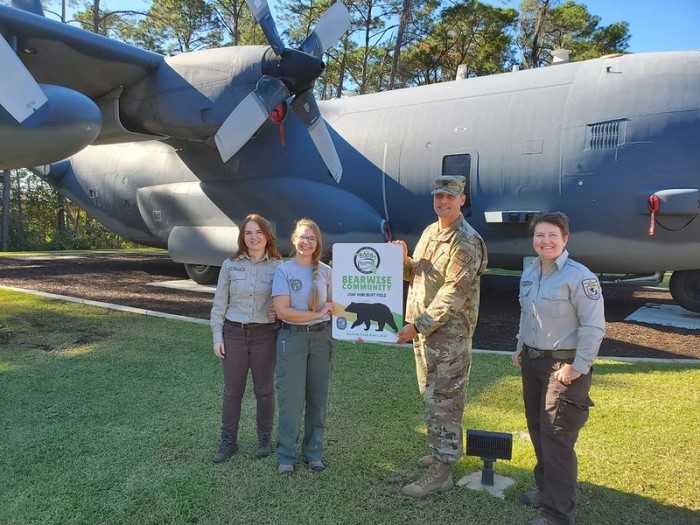 Cypress Dunes has coined the term “Luxury Living Among Nature’s Simplicity.” Bordering cypress forest and wetland habitats, this community decided to take actions to minimize conflicts with their wildlife neighbors. After meeting with FWC staff about recent human-bear interactions, the homeowner association board decided to purchase commercially manufactured bear-resistant trash cans for every residence and required their proper use in 2016.

“Since Cypress Dunes is adjacent to Topsail Hill Preserve, all of our residents believe we have a responsibility to minimize ‘unfortunate bear encounters’ while still enjoying the occasional bear sighting,” said Mike Geihsler, member of the Cypress Dunes Board of Directors. “At the top of our list, we ensure that all residents understand the importance of securing our trash in a specified bear-resistant container. Protecting our wildlife and our residents are both very worthy goals.”

After elevated bear activity in the mid-2000s, Hurlburt Field consulted with the FWC to address human-bear conflicts. Hurlburt Field purchased bear-resistant trash cans for all on-base housing units and converted all dumpsters to keep bears out. Additionally, incoming personnel and their families are provided with training on proper use of the trash cans and education about bears, what attracts them and what to do if they see a bear. Allowing bears to access garbage while living in base housing is a violation of housing rules and is strictly enforced. Hurlburt Field Security Forces receive regular trainings from the FWC on how to respond to human-bear conflicts, including scaring bears. As a result of these combined actions, human-bear conflicts on Hurlburt Field dropped by 70% in 2013 after just over one year of these efforts. Hurlburt Field incorporated all their BearWise efforts in the installation’s 2021 Integrated Natural Resources Management Plan, which further reinforces continuity and confirms the facility will continue to keep people safe and bears wild.

“The Hurlburt Field community is fortunate to have undeveloped areas on base and be bordered by the Eglin Reservation,” said Lieutenant Colonel Nicholas M. Pulire, Commander of the 1st Special Operations Civil Engineer Squadron, U.S. Air Force. “This gives the base a great natural feel and provides frequent opportunities to see bears and other wildlife in their natural habitat. To ensure the safety of our people and the bears we must do everything possible to avoid creating food attractants that alter bears’ natural behavior. By implementing BearWise practices we have eliminated attractants and, as a result, our human-bear conflicts have dropped dramatically.”

It is important that individuals, communities and businesses proactively work together to prevent conflicts from occurring in the first place. Prevention benefits people and bears in the long run. To learn more about becoming a BearWise community, visit BearWise.org. More information about how the FWC manages human-bear conflicts is at MyFWC.com/Bear.

Increasing development and growing human and black bear populations have resulted in more interactions between bears and people. As the human footprint continues to expand into bear habitat, there is a growing need for people to take actions to avoid human-bear conflicts. Recognizing this need, wildlife agencies throughout the southeast have been working together to develop a strategy for educating the public on best practices to coexist with black bears. In 2018, the 15 member states of the Southeastern Association of Fish and Wildlife Agencies launched BearWise®.

BearWise is a regional outreach effort to provide science-based resources and communicate consistent and effective messaging about actions people can take to keep bears wild and people safe. Securing attractants, such as garbage and bird feeders, is the most effective and long-term solution to preventing and resolving human-bear conflicts. As such, some states have adopted formal BearWise Community Recognition Programs to expand beyond individual actions to reduce conflicts. Communities and businesses in North Carolina, Florida and Tennessee are making the commitment to be BearWise, resulting in positive impacts on people and bears.