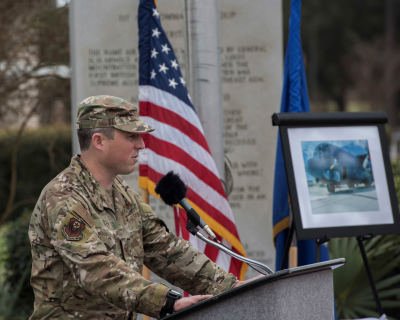 U.S. Air Force Col. Michael Conley, commander of the 1st Special Operations Wing, speaks during the 25th anniversary of Jockey-14 at Hurlburt Field, Florida, March 14, 2019. Jockey-14 was the call sign for the crew of an AC-130H Spectre gunship, assigned to the 16th Special Operations Squadron, that crash landed in the Indian Ocean, approximately 200 yards off the coast of Somalia. (U.S. Air Force photo by Airman 1st Class Joel Miller)

Air Commandos along with friends and families of the fallen Jockey-14 crew attended a 25th anniversary memorial ceremony to honor the team at the Hurlburt Field Air Park, March 14.

Jockey-14 was the tactical call sign of the AC-130H Spectre gunship crew, assigned to the 16th Special Operations Squadron, that crash landed in the Indian Ocean, roughly 200 yards off the coast of Somalia.

The AC-130H took off from Moi International Airport in Mombasa, Kenya, to conduct a routine Joint Task Force mission in support of Operation Continue Hope II.

On March 14, 1994, an explosion occurred in the 105 mm cannon barrel. Having already sustained damage to the aircraft, the crew of Jockey-14 discovered additional obstacles caused by the blast.

While the front-end crew tried to regain aircraft control and make their way back to the coastline, the back-end crew fought to extinguish the fire onboard the aircraft.

Eight of the 14 crew members died in the crash.

The following Jockey-14 crewmembers paid the ultimate sacrifice and were honored during the ceremony:

“I personally knew the members of Jockey-14, they were a strong crew,” said retired U.S. Air Force Col. James Connors, former commander of the 16th SOS. “I’ve flown with many of them at different times and would not have hesitated to fly with them as a crew.”

An AC-130J Ghostrider gunship with the 73rd Special Operations Squadron, an AC-130U Spooky with the 4th SOS and an AC-130W Stinger II with the 16th SOS, Cannon Air Force Base, New Mexico, performed a flyover during the ceremony. Wreaths were also placed by the Jockey-14 Memorial in honor of the Air Commandos who made the ultimate sacrifice during Operation Continue Hope II.

Having to spend time away from home and loved ones, and being called away at a moment’s notice is part of the commitment that these men and women have vowed to honor.

“The 16th SOS with crews like Jockey-14 blazed the trail for [Air Commandos] who are coming along today,” Connors said.