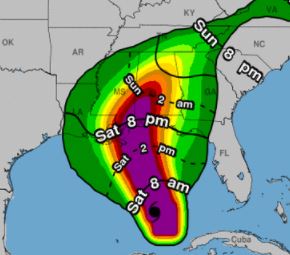 Hurricane Nate continues its fast-moving track toward landfall tonight on the Gulf Coast. The storm’s sustained winds have increased to 90 mph, and its moving NNW at a faster rate of 26 mph.

The National Hurricane Center’s 10 a.m., CDT advisory stated the storm could become a Category 2 Hurricane before making landfall, which is expected somewhere between Grand Isle Louisiana to the Alabama/Florida border.

Winds will increase today as feeder bands approach, bringing heavy rain of 3-6 inches with a maximum of 10 inches in some areas. A tropical storm warning and hurricane watch remains in effect for Santa Rosa County. A flash flood watch is also in effect.

Additionally, a storm surge warning is in place. “The combination of a dangerous storm surge and the tide will cause normally dry areas near the coast to be flooded by rising waters moving inland from the shoreline,” stated the National Weather Service.

NWS also warns of the high risk of “dangerous” rip currents through Sunday night — surf heights will increase to 6-10 feet. “Rip currents are life-threatening to anyone entering the Gulf,’ stated NWS.

Gulf Power advises customers to “prepare to be without power for extended periods of time” if tropical storm or hurricane-force winds and storm surge occur as predicted. “Gulf Power knows when your power is out. However, you can call 1-800-487-6937 if you have any questions,” stated the utility in a press release.

Santa Rosa County Schools Superintendent Tim Wyrosdick cancelled school activities for Saturday evening and will announce by 6 p.m. this evening whether or not public schools will be in session on Monday.

Due to a predicted storm surge of 4-6 feet, Santa Rosa County Emergency Management is recommending evacuation by 3 p.m. today for those within Evacuation Zone A (Navarre Beach and low-lying areas along bays and rivers). It may be unsafe to leave after that time. To check your location visit www.santarosa.fl.gov/knowyourzone. Pensacola Beach is under evacuation orders.

Additionally, both Pensacola and Navarre Beaches were closed to the public this morning. Navarre Beach Fire Rescue Chief Mike Howard asks citizens to respect the flag warning system because the fire department will not enter the water for rescues when double red flags are flying.