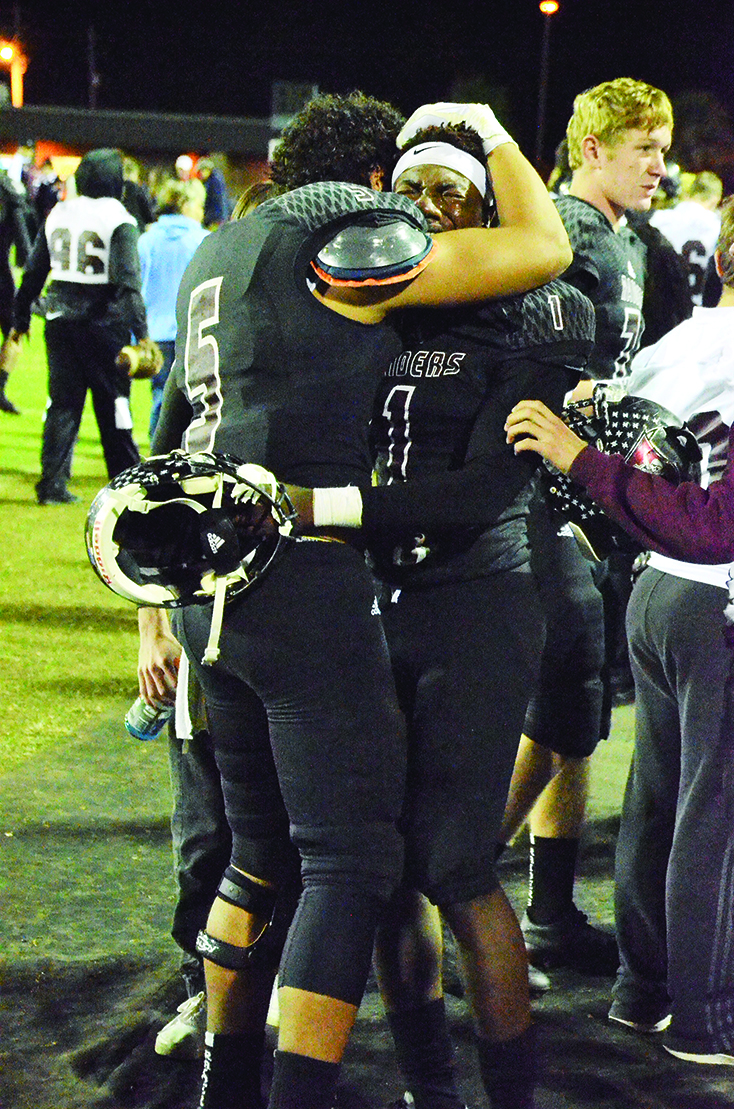 The Navarre High School Raiders matched the record of the most successful team in school history last Friday night when they faced-off against the Lake Gibson High School Braves in the FHSAA Class 6A State Semifinal.
Despite an impressive defensive display, the Raiders failed to convert enough of their offensive plays into scoring opportunities and dropped out of the post season in a 35-14 scrap that dealt Navarre its second loss of the season.
Lake Gibson quarterback Kevaris Thomas’ dual threat style proved difficult to handle for the Navarre defense that gave up 73 yards and one touchdown to Thomas over the ground. M.J. Link hooked up with Thomas on the other end of the ball for 42 receiving yards and one touchdown on the night. The rest of the scores came from junior running back Travell Jones, who rushed for three touchdowns and 123 yards against the Raiders.
The match began much closer than it ended, with both teams stuck in a 7-7 gridlock at halftime. The Braves still managed to get onto the scoreboard first when Thomas released a 46-yard touchdown pass to Link 5 minutes into the first quarter. Navarre did well to counter the success of the Braves’ first drive with an aggressive defense that bought the offense the time it needed to even the score.
Bo Herring led the Navarre defense in tackles for the night with 12 total tackles and a single sack. Although the Braves ran the ball the majority of the time, Navarre’s anticipation of the easy read did not seem to help stop the success that Gibson found rushing against the Raiders later on in the game.
After holding Lake Gibson to a punt with just over 2 minutes left in the second quarter, the Raiders took over on their own 44-yard line trailing the Braves 7-0. Senior quarterback Caine Adamson handed off to Michael Carter on the first down of the drive and the North Carolina commit broke through Lake Gibson’s defensive line for a 56-yard touchdown run.
Antonio Denson started the Braves’ off in high gear when he returned the opening kickoff of the second half 64-yards before Dante Wright brought him down at the Raiders’ 15-yard line. Wrights’ effort would only postpone Thomas’ eventual 6-yard rushing touchdown that jumped Lake Gibson ahead of Navarre early in the third quarter.
Shortly after the crucial score for Lake Gibson, Adamson left the match when he broke his collarbone on an option play and forced sophomore Dylan Kelley onto the field to lead the offense. The loss of Adamson took its toll on the Raiders, but was not the only factor in the 22-point unanswered scoring spree Lake Gibson went on in the second half.
“Caine broke his collarbone and that was in the third quarter and Dylan Kelley came in and did a good job, the game could have gone either way at halftime 7-7,” Head Coach Jay Walls said. “You know our defense played outstanding most of the game, great effort by our team. We just had some mistakes and in a close ballgame they are gonna be magnified and they are gonna hurt you in all three phases of the game,” he said.
Both teams totaled more than 250 yards and had similar time of possession during the match, but the Raiders were hit with 10 penalties for 88 yards compared with the Braves’ two penalties for 14 yards.
The culmination of a few controversial calls, high emotions and the loss of the teams’ starting quarterback led to a momentary lapse of composure late in the fourth quarter for Navarre. After a fumble was initially called for the Raiders, the call was reversed by the center referee and resulted in three separate unsportsmanlike conduct calls on Navarre.
“We lost our poise a little bit, there were some calls — we felt like we had a turnover and it didn’t go our way, ya know, and we gotta keep our poise in that situation,” Walls said. “And we got a penalty on our sideline and then had another player or two penalized, uh we just can’t do that. You gotta just keep playing football,” he said.
Lake Gibson (13-0) advances to the FHSAA Class 6A State Final in Orlando and will try to overcome the Miami Carol City Chiefs (10-3) in order to defend their undefeated season record. Navarre finishes the season with a 12-2 overall record which matches that of the best team in school history, the 2012 Raiders.
“All the credit to them, they are a very good team, we wish them all the best and we hope they win it all.” Walls said about the final result. “We had a great season, we had a great run in the playoffs, we did a lot of great things — I’m certainly proud of our kids.”