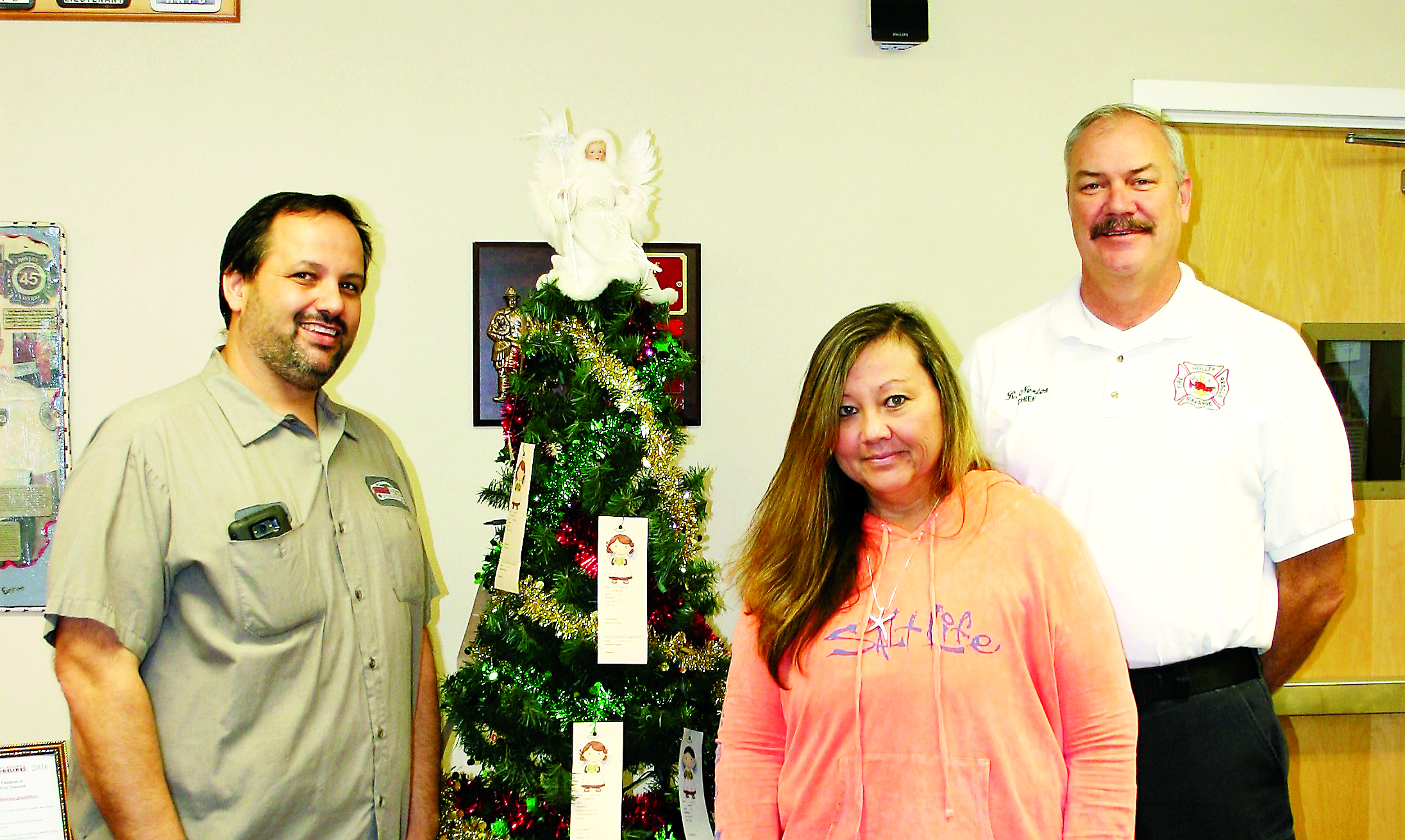 When Navarre Auto Repair owner Will Goulet heard that there were children in the area who might not have a present under their tree on Christmas morning, he took notice.
For about ten years the Holley-Navarre Fire Department has supported the Families First program by collecting Angel Tree donations. Each angel on the tree sponsors a child in the community whose family is struggling around the holidays and can’t afford a Christmas for their child.
When Goulet discovered Wednesday there were angels still hanging on the tree at the Holley-Navarre Fire Station, he not only stepped up and took care of some, but also called on other business owners to help out, first calling upon Tammie and Bryan Duncan of Bryan’s Towing, who, in turn took care of 10 angels.
“I just don’t want a kid to go without a Christmas present,” said Goulet.
Once Goulet got the word out to surrounding businesses, the giving momentum kept rolling and rolling.
Less than five hours after Goulet sponsored the angels, James Dabney and Judy Pickett of East River Smokehouse and Darrell and Theresa Bailey of 87 Garage generously took care of all the remaining angels on the tree after Goulet reached out to them about supporting the cause.
HNFD Chief Ron Norton said the department erects the Angel tree every year to help give back to the local community to make sure every child has a blessed Christmas.
“It’s a way of helping, giving back,” Norton said about the Angel Tree program, which they have participated in the last decade.
Goulet said he was originally unaware of the program, and as soon as he heard there were local children in need of gifts for the upcoming holiday, he drove to the station and sponsored several of the angels.
“The day I went down there, there were still 20 kids left on the tree, and I was like ‘Man, these kids aren’t even going to get a Christmas present,’” Goulet said. “I think that’s the worst thing when a child wakes up on Christmas morning and doesn’t have a present. I remember growing up, we always griped and moaned when we got socks or underwear…but these kids have nothing. And they deserve to have something under that tree on Christmas.”
Goulet is no stranger to giving. He often donates money to local sports teams and often reaches out to other businesses to encourage them to give back to the local community. And he did just that on Wednesday when he took the last 5 angels on the tree and gave them to Dabney.
“I just like to give. It’s the type of person I am. I try to help out because I don’t want some kid to go without playing sports or for them to not have a Christmas present,” Goulet said. “It’s nice to know I have friends that think alike and want to help people in the community out.”