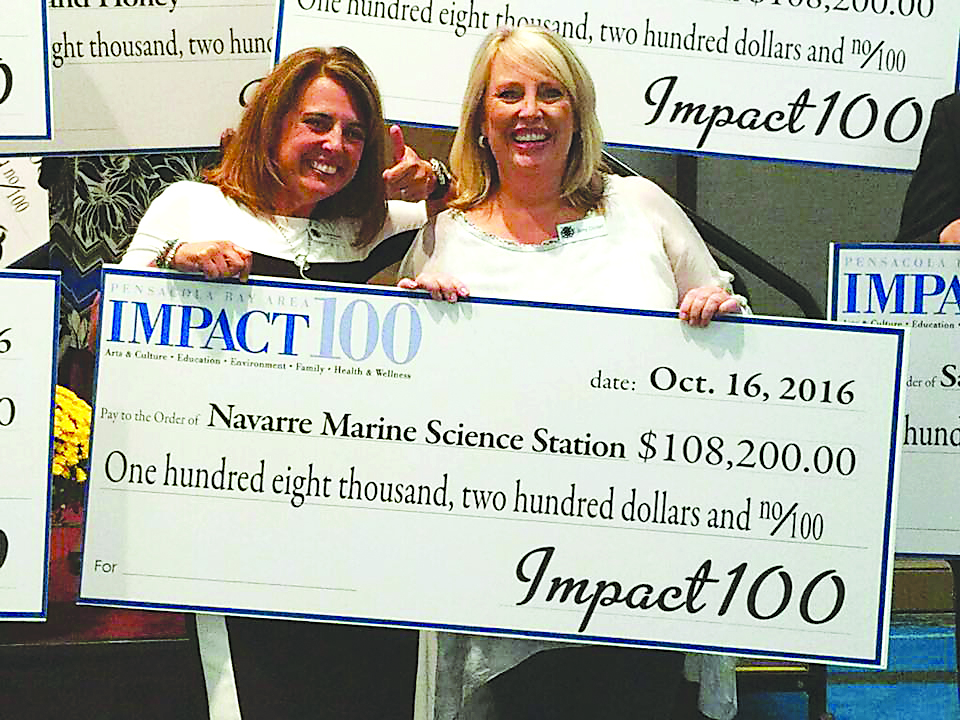 Last Saturday, IMPACT 100 Pensacola Bay Area gave a big boost to help one local expand on her vision and love for marine science education, marking a first for the Navarre community.
At their annual gala, IMPACT 100 awarded the Navarre Beach Marine Science Station a $108,200 grant, which will help the nonprofit purchase an educational 24-foot modified classroom. This was the first grant ever distributed to a Navarre nonprofit from the IMPACT 100 Pensacola Bay Area.
The NBMSS promoted a Coastal Conservation Corp project to the IMPACT 100 team that showcased that mobile trailer, which will house educational displays, touch tanks and a slew of other tools to help locals and visitors learn about marine science.
The rolling classroom be named “Discovery Depot” and it will be pulled by a vehicle, which will also be acquired through the grant money.
The mobile conservation vehicle will be outfitted with state-of-the art exhibits and a touch tank with marine animals found in the Gulf of Mexico.
The grant will also help purchase live animals for the touch tanks located inside of the trailer, static exhibits and items such as a generator to power the classroom’s audio and visual equipment and microscopes. The Coastal Conservation Corp project will empower its visitors to be active participants in protecting the environment, according to NBMSS Director Charlene Mauro, who has been successful at writing up grants for the NBMSS in the past. This time, she had a little help from Amy Cozart, one of the NBMSS board members and head teachers.
“Conservation Corp’s main goal is to help our community understand that we are all interconnected to the Gulf of Mexico. The Discovery Depot has a state of the art filtration system and is able to house a wide variety of live marine life,” Mauro said. “Our visitors will learn about and explore the sea life that live in our area through hands-on interactions with real animals such as sea cucumbers, conchs, horseshoe crabs, and sea stars in an inviting, shaded, and Americans with Disabilities Act (ADA) accessible location.”
The trailer was much needed for the small nonprofit, which runs out of a building on Navarre Beach. A building, which sees an influx of students from area schools and visitors on a local basis.
The trailer will allow NBMSS and NWFL Marine Education and Discovery of Gulf Ecosystems, Inc. to educate people far and near.
Not every school in Santa Rosa County and the surrounding area can make the trek to Navarre Beach to the NBMSS.
That’s where the Discovery Depot will come in handy.
The rolling classroom will be trucked to schools, community events and festivals to help educate the community about beach safety, marine debris, jellyfish, fish and turtle conservation and monitoring, reef health and invasive species monitoring.
“With our current connections to the scientific research community, such as the University of West Florida, National Marine Fisheries, and REEF, we are able to uniquely bring scientific research to the people through citizen science,” Mauro said. “Research is currently going on and programs abound for all our visitors to become active participants in ocean conservation. The Discovery Depot will act as a catalyst igniting the growth of marine conservation opportunities to be showcased at the future 12,000 sq. ft. Gulf Coast Discovery Center.”
The exhibits in the Discovery Depot will raise awareness of environmental issues and give suggestions of how visitors can be active and involved in making a difference to protect and preserve the ecosystems.
Mauro said she got the idea for the exhibit during a recent trip.
“I got the idea after visiting several sites in California, some of the same centers and aquariums we will consult when the Gulf Coast Discovery Center is built,” Mauro said. “With my experience working in aquariums and informal education, I have learned about what works, is feasible in an outdoor environment, and what engages people.”
Mauro is currently waiting on the grant money to flow in. Once the NBMSS receives the funds, she said they will immediately go towards the vehicle and trailer purchase and get the ball rolling on expanding the reach for the NBMSS.
“I have to admit, I cried a bit after seeing our name on the giant check. Not so much about the dollar amount, but about the 1,000-plus women of IMPACT 100 believing in what we do at the NBMSS,” Mauro said. “I thank Amy Cozart, one of our board members, for writing the grant — I assisted her to make this dream a reality.
“We are proud to be Navarre first IMPACT 100 Pensacola Bay Area winner,” Mauro told South Santa Rosa News. “It is also fantastic that we are the only first time application ts to receive the grant. A great sign for what’s to come from us!”