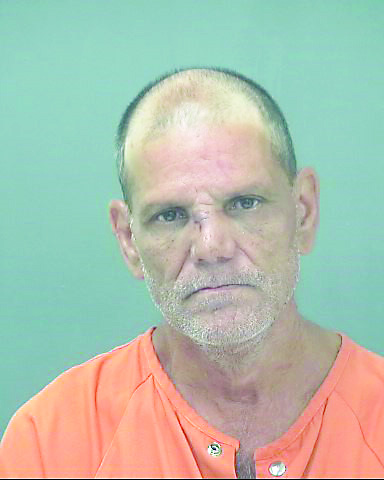 A Navarre man was put behind bars last Friday after the man’s daughter came forward alleging her father hit her several times and threw bottles at her at a Navarre home.
According to the arrest report, following the domestic violence related call to dispatch, Santa Rosa County Sheriff’s deputies arrested 50-year-old Franklin Ruiz and charged him with aggravated assault with a weapon, battery and resisting an officer without violence.
The arrest report indicated that the man’s daughter called law enforcement alleging Ruiz had punched her several times in the head and that the man threw multiple things at the victim during the altercation including a bar stool and a beer bottle.
The victim told deputies that she had gotten into a physical altercation with her father around 2 a.m. that morning and Ruiz left the home and later returned. When he returned to the home, the victim stated Ruiz picked up a bar stool and threw it at her. The victim then stated Ruiz picked up a bottle of grape juice and slung it at the victim, and later did the same with a beer bottle.
The victim stated that Ruiz threw his cell phone at her, striking her in the head. Deputies noted a red mark on the victim’s head.
The report indicated that the victim told deputies that she went to the kitchen following the incident with the bottles and cell phone and that’s when Ruiz entered the kitchen and started spitting and throwing blood all over the victim, which was coming from Ruiz’s nose.
The victim then told deputies that Ruiz grabbed her by the hair and punched her in the face multiple times.
Deputies noted blood spatter on the victim and throughout the residence. They also located the grape juice bottle and beer bottle that the victim alleged Ruiz threw at her.

Ruiz fled the home when the victim called law enforcement and later arrived when deputies were collecting evidence at the scene.
When Ruiz arrived at the home, deputies attempted to handcuff the man, but he resisted arrest.
The report indicated it took two deputies to handcuff the man.
Ruiz told deputies after he was read his Miranda rights that the victim hit him in the nose, and later changed his story by telling deputies that the victim’s husband hit him in the nose.
Ruiz also alleged that the victim scratched him on the neck unprovoked.
The suspect was later transported to Gulf Breeze Hospital for treatment.
According to the report, at the hospital, Ruiz stated that he and his daughter got into an altercation, but that the victim attacked him first. The man claimed he defended himself through the entire altercation. He stated at the hospital that his daughter’s husband kneed him and stated “Don’t mess with my wife”, the report stated.
Hospital staff later treated Ruiz for a broken nose and he was released from the hospital and sent to Santa Rosa County Jail on $20,000 bond. Ruiz remains behind bars as of press time.