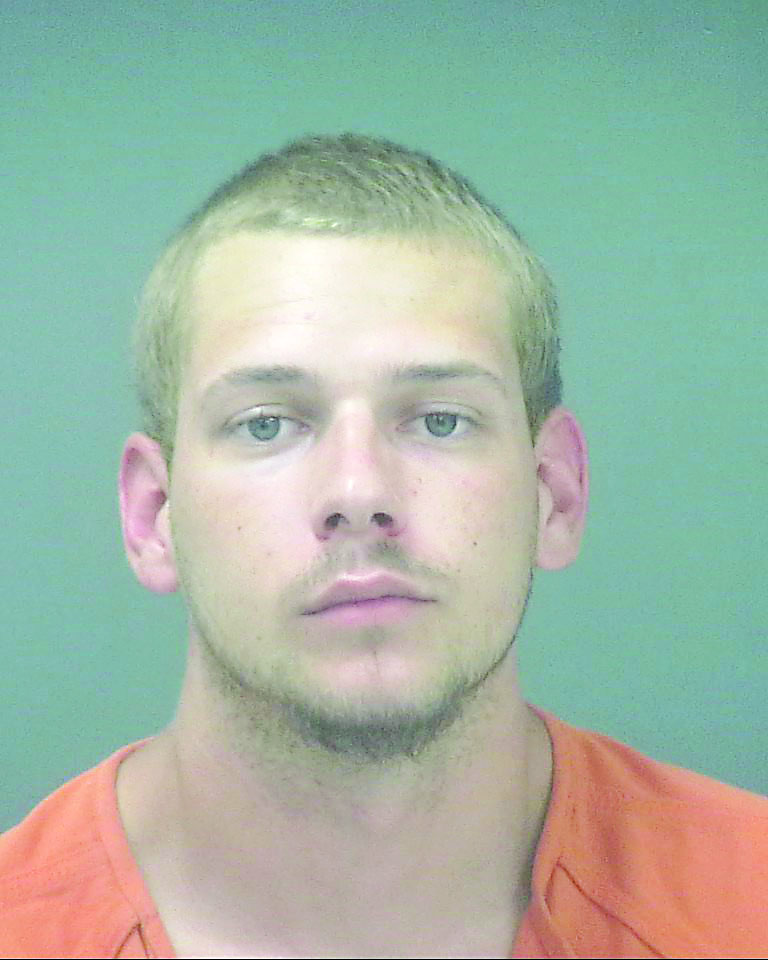 A Navarre man was put behind bars at Santa Rosa County Jail last Sunday after he allegedly threatened a manager at the Navarre Walmart with a knife as he was shoplifting with another person.
The suspect, 21-year-old Christopher Shaw, was arrested for the incident, which occurred back on April 22, and was charged with Aggravated Assault With a Deadly Weapon Without Intent to Kill. He remains behind bars as of press time without bond. According to the Santa Rosa County Jail View website, this is Shaw’s second arrest in under a year for Aggravated Assault With a Weapon.
According to the Santa Rosa County Sheriff’s Office arrest report, a local deputy was called out to the Navarre Walmart at around 2:45 p.m. on April 22 in reference to the complaint.
The deputy met with one of the store’s managers who claimed Shaw brandished a knife earlier that day after the manager caught him and another individual, later identified as Margarete Smith, stealing merchandise from the store.
The manager stated that he received word earlier that afternoon that two individuals were going around the store concealing items in an attempt to shoplift them.
The victim said that he started following the suspects around the store and that at one point he witnessed the woman who was with Shaw emptying items into her purse. The victim said he was standing near an end cap and that when Shaw saw him, the suspect approached him and brandished an “arrow shaped” razor-type knife. The manager stated to law enforcement that the knife was cupped in Shaw’s right hand, according to the report.
The manager said at that point, he feared for his safety and backed away and Shaw walked away as well.
The suspects eventually made their way to the exit of the store, and according to the report, Shaw kept flashing the knife at the manager as he made his way to the exit.
The victim claimed that when Shaw exited the store, he “extended his right arm and pointed it at (the victim)” and shaped his fingers into a gun and pretended to “shoot” the manager by dropping his thumb as though the gun was recoiling.
A shopper in the store told the responding deputy that he saw Shaw brandish and point the knife at the manager, according to the report.
Last Sunday, a separate SRCSO deputy pulled over Shaw in a vehicle. With him in the vehicle was Smith.
Smith spoke with deputies and admitted that she was with Shaw in the Navarre Walmart back on April 22. She admitted that she was trying to shoplift items and that one of the store’s managers was following them around, according to the report. She stated that the manager never approached Shaw and stood behind an end cap, but that Shaw walked up to the manager at one point and that the victim said “Have a nice day”, and that Shaw responded “You too”, the report read.
Smith stated that she never saw Shaw brandish a knife while near the manager, but confirmed that he usually carried two knives on him, the report stated.
A deputy then spoke with Shaw and the suspect openly admitted to shoplifting in the Navarre Walmart store back on April 22, but said that when he saw the manager following him and Smith around, he put the items back, according to his statement in the report.
Shaw told the deputy nothing happened after he put the items back and that he just left the store with Smith, according to the report.
Shaw admitted that he did have a pocket knife with him that he had it out and was using it to get “dirt out from under his fingernails”, the report stated. According to the report, Shaw told deputies that he never threatened the manager with the knife and that he was just using it to clean his fingernails.
According to the Santa Rosa County Jail View website, Smith was never arrested in regards to the incident.